Stray Cinema is an open source film project, experimenting with the open source ethos to market and distribute films.

To participate, anyone in the world with an internet connection can download feature footage for free, and create their own version of a film. Unique edits can then be uploaded back onto straycinema.com, where they are voted on by the online community. The top five films are screened alongside the directors original edit at a mulitmedia screening event.

Beginning, Middle and End is the first feature film to come onboard the Stray Cinema project. This is an independently financed debut feature from Melbourne based filmmaker, Ryan Alexander Lloyd. Despite rejections from some established festivals, Ryan was determined to let the public see his work, and he decided to release his footage onto Stray Cinema. Wanting to give his film a life, he saw an opportunity to go beyond self distribution and create a community around the film.

For many, filmmaking is not about making millions, it's about making an exceptional product, and telling their story in a unique way. But filmmakers, like developers, need to make a living. To generate revenue for the filmmaker, Stray Cinema looks to the open source community for inspiration, selling services around the footage, rather than licensing it.

The footage is available to anyone in the world to use it as they like, so long as it adheres to the Creative Commons license. However Stray Cinema aims to create a film experience, engaging audiences who are no longer satisfied passively consuming content, encouraging them to contribute and be part of the films story. At the end of it we hope they will support the project by making a financial contribution in exchange for DVD or cinema ticket for the films original edit. Further more, we hope that they feel invested enough to share the film with their friends, family and online networks.

Other open source revenue models for film could include ad insertion before and after the film, product placement, special features such as cast and crew interviews and the making of. The cast and crew could also offer their services for corporate jobs, or professional editing of the footage, and so much more. We are creatives, let's be creative about this.

Traditionally films are created by a tight network working towards a singular vision, and the footage is only released when its owners can control how it is interpreted. The information in film has not been free. I believe the film industry fears open source model, but it is the artist that stands to be rewarded. Digital communication is revolutionising how producers and consumers interact, niche markets are easily reached, and there has never been a better opportunity for film creators to independently publish and distribute their own work. When distributing work directly to audiences, without intermediary figures taking a cut, more money goes directly to the artists.

In a world where the rules are redrawn daily, that dictate where information can and cannot go, why not marry film with the open-source ethos. If a person wants to download a film and /or sample it, they are going to do it, so lets let them. By releasing this control, a story is created about the film, as well as a participating community in place of a passive audience.

The objective of Stray CInema is to give everyone the opportunity to have a say over what story is told with our footage, and at the same time provide a platform for niche film productions to find an audience and sell their work. However it is an experiment and the outcome and evolution of the project is yet to be seen. For open source filmmaking to be taken seriously then artists must be educated about the benefits of working openly, and the revenue models associated.

Just imagine if the open source paradigm could find a solid footing in the entertainment industry, the volume of independent producers distributing and exposing their work would be outstanding. 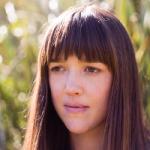 Michelle Joy Hughes is a Director, Producer and New Media enthusiast, who has over eight years experience working in the digital media industry. She is the founder of the open source film project Stray Cinema, and her passion is allowing more people to tell their stories using film.
More about me