Humor and comedy on the Internet succeed through collaboration

Why collective authorship is awesome for pop culture entertainment 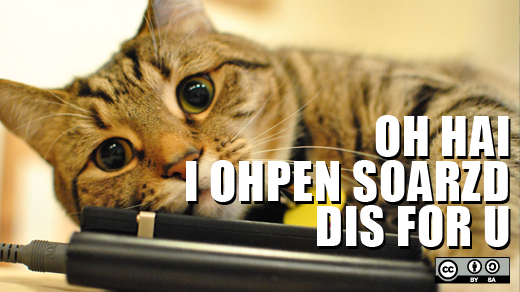 What do you think when hearing the term collective authorship? Wikipedia or open source software might first come to mind. These are collaboratively-created products and services that enhance education, technology, and business. You might not be so quick to think of a largely overlooked area where collective authorship is gaining significance: pop culture entertainment. The comedy genre, in particular, is experiencing notable changes because of open thinking, and for the better.

Comedy for many means a stand-up act, a funny TV sitcom, or a Will Ferrell movie. Comedy is largely equated with these art forms that have a traditional producer-consumer  relationship. The jokes are produced by a single or small group of comedians, and audiences react to them positively or negatively. The participatory culture of the Internet has had significant influence in blurring this boundary between producers and consumers. Regarding comedy, netizens aren't just retelling or remixing the jokes they hear in the media. They are collectively generating new forms of joke telling altogether.

Take, for example, image macros or memes—funny text superimposed over an image. It's an online phenomenon largely rooted in the LOLCat Internet meme involving funny cat photos with cute captions. Image macros are bite-sized jokes that have spawned countless derivatives of comedic characters (Philosoraptor and Socially Awkward Penguin) and themes (FAIL and You're Doing It Wrong). Or even the recent opensource.com memes.

The genre has escaped from niche Internet forums and are now found on popular social networking sites. Who produces an image macro character or theme is negligible because the joke's meaning is communally created and remixed. It's humor for the sake of enjoyment, not credit or profit.

Image macros are just one example of collaborative online comedy. There are also demotivational posters and rage comics, among others. We should be excited about this.

1) New humorous applications and derivatives are encouraged and created freely

If you've studied humanities, you've likely come across philosopher Michel Foucault. In his 1969 essay, What is an Author?, Foucault argues that readers shouldn't care who the author of a text is because authorship restricts readers from imagining new meanings and applications. Readers should ask what contexts could this have and how can this be improved, instead of who said this. Applied to humor, assigning a joke to a particular comedian discourages audiences from participating in the comedic process because doing so implies stealing. With collective authorship, no one person holds the rights, so jokes can be improved collaboratively.

2) The jokes can carry heavy political and cultural significance

When one comedian delivers a joke that's political or offensive, the context of the joke is placed on the individual—Daniel Tosh is concerned by some to be sexist/racist/etc. Without an author, the popularity of a collaboratively produced political or offensive joke invites deeper thought about how it reflects current social and cultural climates. If many people are retelling and remixing jokes that degrade or empower a political candidate or a minority, what does this mean?

3) It desegregates cultures and subcultures

Open humor draws participants from a wide range of cultural backgrounds who may be otherwise be divided by factors such as language. Online collective humor often relies on visuals and avoids themes that are specific to beliefs or cultural practices. Maybe the reason why so many Internet memes involve cats being silly is because regardless of your language or beliefs, seeing a cat trying to squeeze into a tiny box is just funny! As a personal example, in my Internet travels I discovered Brazilian Internet meme Tenso. I have never been to Brazil, nor can I speak Portuguese, but the visual humor still resonated with me.

4) The funniest stuff rises to the top

There are countless image macros out there. Countless attempts at funny characters, genres, and jokes that failed to catch on. But like the open source way in general, open humor is based on meritocracy. Because it relies on others thinking a joke is funny, then distributing and remixing it. The not-so-funny stuff falls aside. And anyone can try to be a comedian without the potential awkwardness of cricket chirps in front of a live audience.

Open humor isn't an entirely new phenomenon. Rather, the Internet revives traditional forms of verbal joke telling on a larger scale. Internet humor researcher Limor Shifman says:
"The Internet's interactivity allows users to participate in the joke telling process. This feature, which is not far removed of the traditional oral condition of joke telling, may significantly alter the experience of reading a scripted humorous text."

Knock-knock! Who's there? Well, any number of things because this joke has been remixed and reinvented over the years from person-to-person. Participatory comedy, whether it be through traditional verbal forms or new Internet memes, exemplifies the core purpose of humor: to facilitate shared social experience and enjoyment.

Kendra Mack - Kendra is a Red Hatter working in Channel Partner Marketing. Outside strategizing Web experiences for partners, she loves working on research and writing projects about media and culture topics. She studied Communication and IT at the University of NH, and you can follow her on Twitter. Kendra’s always on the lookout for good reads, pursuing her quest of being a lifelong learner – so send cool blogs, articles, and books her way!
More about me

I enjoyed this piece quite a bit. And I was delighted to see my beloved Foucault get a mention on opensource.com (a first, if I am not mistaken!).

In "What is an Author?" Foucault doesn't simply argue that authorship no longer matters (or that the author is dead, <em>pace</em> Barthes), though he does stress a non-necessary relationship between author "intent" and the "meaning" of a text. But here Foucault is less interested in the nature of "meaning" than he is in the concrete and discursive <em>effects</em> of what he calls the "author function"--not a person <em>per se</em> but a larger apparatus that exerts force on a "work." So while Foucault admits that authorship isn't a singular (or even primary) determinant of a text's meaning or utility, he <em>does</em> want to indicate that authorship (or the author function) works quite powerfully to hold works together (to keep them stable) and to <em>regulate</em> the ways they're encountered, utilized, dispersed, and so forth (to manage, maybe even aggressively, their "applications," to use your word, which is just great).

I think this is an important distinction for a few reasons.

First, saying "the author's intent doesn't matter" but stopping short of interrogating precisely how the author function plays a role in a particular situation doesn't provide us with a way of asking important questions about the ways creative material is in fact governed or controlled. When the Writer's Guild of America went on strike in 2007, issues of authorship, ownership, distribution, rights, and the future of collaborative production were at stake--even as the works in question were produced collectively (especially in the case of comedic works, as you note). So it's important to trace the ways "authorship" functions in relation to creative works, even if there <em>is</em> no permanent or necessary relationship between an author and a work (or set of works).

Second--and with regard to open source software this time--understanding the author function becomes critical for understanding how particular voices in various open source communities generate more impact--more force or more power to achieve things--than others. It's true: open source code has no "single author," and yet certain voices in particular open source communities gather momentum in ways that allow them to influence the direction of their respective projects. Foucault's author function provides one tool for tracking how this might happening without taking the naive stance that authorship <em>implies</em> control.

Thanks for a thought-provoking article, Kendra!

Thanks Bryan for sharing your expertise! I'm a Foucauldian novice, and your clarifications are fantastic. I bet a whole book could be (or already is) written on Foucault's author function as it applies to open source code!

Or maybe a dissertation. Hmm.