Can Inkscape reduce the number of incarcerated people? 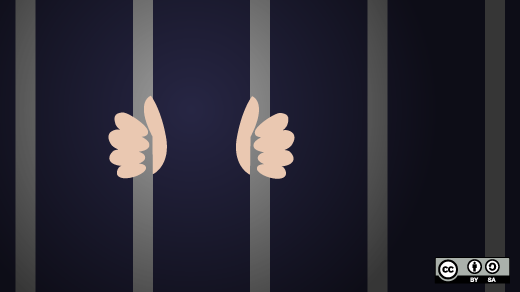 When the free vector drawing program Inkscape was first released in late 2003, I realized this software could do some part in helping to reduce the number of people incarcerated in the United States. This worthy goal is still within reach. Let me explain.

From 1990 to 2000, I spent quite a bit of time supporting the Adult Literacy Resource Center of the D.C. Public Libraries. Then, this division was exploring how technology could help adults learn how to read (among other things). I saw up close how computers could engage these adults, many of whom had learning disabilities.

Part of my role was to teach the library staff and the adults in this group how to use the ClarisWorks Draw program on the Macintosh computers in their new computer lab. This simple vector drawing program was shipped with every Macintosh computer back then. (A modern equivalent is the Draw program in OpenOffice and LibreOffice, both wonderful, free software programs that run on all major computer platforms—Linux, Macintosh, and Windows.)

The high point of my work in this library system was when my library coworker, Stephon Gray (who has learning disabilities), and I created a two-minute multimedia video: Fannie Lou Hamer: Freedom Fighter. Stephon wrote and narrated this biography of one of the most remarkable leaders of the civil rights movement. We used the ClarisWorks Draw program and a $5 software program from Sweden called SimpleCard, a simplified color version of Apple's HyperCard.

We put this video up on the web in 1996, almost 10 years before YouTube was launched. Within a week, I received an email from noted literacy activist David Rosen, in Boston. His email was short: "This is good."

Pushing round pegs into square holes

Our educational system is currently set up to favor people who can excel at reading and writing. But, the diversity of human minds includes those who have a natural aptitude for this and for those whom reading and writing are a constant struggle. In our collective stupidity, we force all people down the path to develop mastery of reading and writing skills. Instead, we ought to be spending more time uncovering the natural talents of every mind, whose talent might well be more suited for working with 2D and 3D graphics, animation, dance, music, or any of a thousand other things.

Recall, not all that long ago, that all left-handed students were once forced to write with their right hand. That same narrow-minded thinking permeates so much of our schooling and may be one of the reasons we have such a high dropout rate in our schools. We spend billions of dollars forcing round pegs into square holes, and then we act surprised when they don't fit. It's no wonder so many students drop out. Have you noticed the high correlation between high school dropouts and our incarcerated population? And would it surprise you to know that about 66% of the incarcerated population has learning disabilities?

Our schools need to be producing makers in large numbers, not dropouts in overwhelming numbers.

Inkscape—a free, stable, and powerful vector drawing program—is one way of unlocking the natural graphical talent that is waiting desperately to express itself. Inkscape runs well on old computers too, so every middle school and high school student who wants to dabble could do so using a free, refurbished computer in their home. We could be teaching Inkscape classes at public libraries, community centers, makerspaces, and schools. We could be teaching Inkscape in our prisons so that our incarcerated population develops digital competences that can help them find jobs when they are released. We could also have Inkscape stations set up in homeless shelters, battered spouse shelters, hospitals, youth centers, workforce training centers, churches, mosques, synagogues, temples, bus stations, and anywhere where human beings gather.

Vector graphics can be fun to make for a whole range of purposes, but vector graphics also bring stories alive, as seen in this beautifully done animation by Kimberly Rice, of Oklahoma City, bringing alive a short children's story of mine, The Great Ping Pong Ball Experiment. Kimberly used Adobe Flash to create this, but all of the graphics could have been drawn in Inkscape.

Freely distributed stories like this can help promote literacy; our society doesn't need to have every high school student capable of writing compelling comparative essays. Everyone needs functional literacy skills, plus opportunities to reveal whatever other talents they possess. Inkscape is one of the tools that can do that. Other no-cost tools include Google SketchUp, a fabulous 3D drawing program designed for architects, but easy enough for 1st graders to use. And, Blender, a free 3D animation program, can produce visually stunning films.

I'll finish by saying that the talented programmers and designers who make Inkscape have given the world a gift that we are just beginning to comprehend. The way we thank them is to use the program, tell others about the program and share ideas of how this software program can inject more humanity into the world we live in. I've tried to do my part. What steps will you be taking? Both simple steps and bold ideas are needed. All aboard.

Historical footnote: Stephon Gray and Phil Shapiro presented Fannie Lou Hamer: Freedom Fighter as the keynote address at the annual Mayor's Commission on Literacy and Technology conference in Philadelphia in May, 2000, and also at the annual Community Technology Centers' Network conference in June, 1997, at Carnegie Mellon University, in Pittsburgh. The theme of their keynote address in Philadelphia was: We must all become makers.

What to read next
Tags
DIY and maker culture
Phil Shapiro