Keys to diversity in tech are more simple than you think 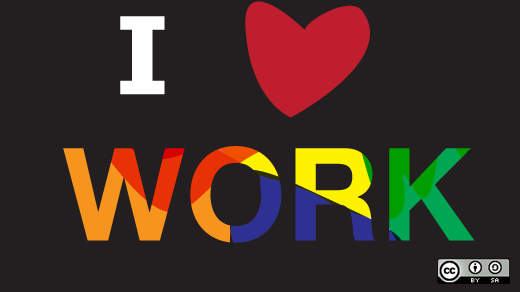 I attended the All Things Open conference this year (in Raleigh, NC on October 22 and 23, 2014), and one of the sessions I enjoyed the most (aside from Bob Young's wisdom in business session) was a panel on Women in Open Source and Technology. The conversation was candid and open, and it took a real look at what it's like for women working in technology.

This article is my notes on the panel, taken from the front row. This is not a verbatim transcript and represents only my perspective; covered here is most but not all of the discusssion.

Elizabeth K. Joseph, an Automation and Tools Engineer at HP working on the OpenStack Infrastructure team

Panelists listed above are seated here left to right, photo by Jason Hibbets

Alexander (host): Asks panelists how they got into technology?

Squire: Learned how to write her own code and had a research mentor whom she met after she decided to start studying open source.

Joseph: Learned about Linux from her boyfriend at the time and started writing code in 2002; started going to the Philadelphia Area Linux User Group where there were some awkward people reacting to her being female in an all-male group; but the group has overall been very supportive through the years. Started a group that went by "Linuxchix" and turned into Phillychix, to gather women in the area around Linux, to avoid any awkwardness and make it easier to be part of a group. In 2005, she started contributing to open source; rewriting documentation which is a hard job, so she had to learn DocBook; moved on to Debian packaging...

Stanley: Has been interested in technology her whole life; her brother was into it and her dad encouraged her. Began using open source in grad school; research and tools she was using, then started contributing back.

Weyl: Was an architecture major in college, which combines two of her favorite things: art and math; by the end of college she was teaching everyone how to use software on their computers. She went on to work in public health; ran youth programs and taught people how to use computers. She has been developing websites, freelance, since 1999.

Sandler: Had a father that encouraged her (typical of a lot geeky women) and computers were in the home. She went to engineering school, then law school, and returned to computing; then, she got into free software when she needed a pacemaker for a heart condition and found out that it uses only proprietary software.

Weyl: Sees a lot of women who are freelance and work for themselves because they have stepped away from the hierarchy of moving up the ladder and being told they cannot achieve high ranking positions; before she was being asked to do human relations jobs but not to actually architect a website; told she would never be hired to manage developers and engineers at a high level.

Joseph: Most women she works with in open source are paid by a company; they don't contribute out of their free time; statistically women have less free time than men, so you need to pay women if you want them to be in open source.

Squire: Had never worked for or been interviewed by a woman before entering academia.

(Note from the writer: I think it is interesting and important to note the difference between tech and other fields. My experience is in stark contrast to Squire's experience. I graduated in 2005 from undergrad with a degree in Communications/Public Relations and a minor in Spanish and have worked for five woman-owned or woman-run organizations/departments out of seven. One was a public relations firm, three were healthcare organizations, and one was a local government department.)

Sandler: Women get tired, it's hard work to fit in when you are not welcome and encouraged, so women just choose to do something else.

Joseph: Still gets asked to get coffee and take notes.

Stanley: Women are trying to get our ideas heard.

Asks panel why diversity is important?

Stanley: If you plan to build software for people, then you should want many different ideas, which means you need contributions from all kinds of people.

Squire: Every couple of years someone does some research and finds a factor for why diversity matters, but there are a lot of surveys that needs to be done and a lot of introspection that needs to happen. There are a lot of factors, there is no one factor. Let’s give this problem the respect that it deserves. The fact that a variety of perspectives is needed is just common sense.

Weyl: Everyone should not come from computer science programs, they should come from all different kinds of backgrounds. Non-white people and non-male people included, also, kids and older people. We need full diversity of race, religion, age, and ethnicity. 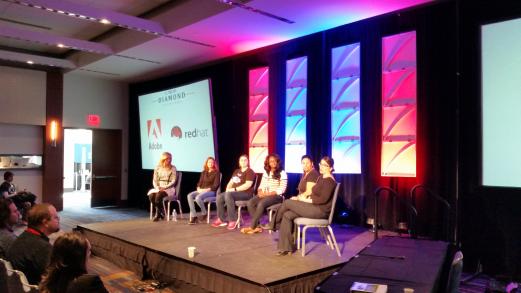 Women in open source and tech panel at All Things Open conference, photo by Jason Hibbets

Sandler: Stop helping girls so much so that they can become better problem solvers. It’s amazing how early these differences in education start. She noticed she was helping her daughter more. This is why girls and women think they aren’t as good at science and math. It's wasted potential.

Joseph: We need to engage more people just to fill the jobs! The talent shortage is a real thing.

Alexander: Girls get to a certain age, 6th grade for many, where they just aren’t interested in technology and computer science.

Asks what can we do about it?

Squire: Provide a variety of types of problems to solve; she does this in her college classes; it provides for a variety of approaches. Women and others may have a different approach.

Sandler: Help women avoid being overlooked; women get interrupted more and if we point it out we seem like we're whining. So, you can help by amplifying our messages and by helping us to participate on our own merits.

Alexander: There are ways to overcome it, whether you are the leader or member of a team. Say to the group, "I want to hear from (this person)" to make your team more inclusive. There needs to be a cultural change for inclusion.

Weyl: The "Dave to girl" ratio—how many women are there to the number of guys named Dave in the room? SurveyMonkey is doing a great job at actively recruiting junior engineers then assigning them a mentor; they also have a great working environment for parents, for more flexible schedules, which helps bring women up and helps them stay for a long time.

Stanley: We have programs for immigrants who are not in the public school system, and it's so cool to see they they don't have the same mentality, that "men do this and women do this." Also, change your language. Maybe instead of "you are going to learn to code" say "we are going to learn to build apps"; this presents it as something more than just code, we are going to create something for someone of value. Also, seeing someone that looks like me in tech is so powerful; boosts confidence.

(Note from the writer: I don’t tend to think much about how powerful it is to work around and with other women (or people that look like me) until I do, and the boost in my confidence is evident. Being at a conference just hearing other women speak, about technical topics, not just this panel, I had an emotional response to it. It really does mean a lot to be around other women, as a coworkers and as role models.)

Sandler: Women tend to apply for jobs that their skill and experience almost perfectly matches, they want to meet all of the criteria in the job description; but that's not necessary; men apply for jobs they aren't a perfect match for but that they want.

Weyl: Men think: Am I capable? Women think: Do I have the experience?

Squire: Women are risk averse when choosing a major in school too; they do so more often based on their current economic status, but we need them choose fields that have big, interesting problems to solve.

Alexander: Asks what have you done to date in your career that you are most proud of?

Weyl: Started a youth summer program for girls; all of them graduated high school without having children; they learned how to use the web and improved their math skills; they saw there was something more in life to do beyond working at WalMart; we need to provide girls and all children with the ability to strive for what they are capable of.

Stanley: Most proud of being a mentor and seeing mentees excel.

Joseph: Wrote a book! It was on the bucket list; she didn’t think she could do it but she made the time. Also, one of her close friends told her she’s on a technical career path because of Elizabeth's encouragement.

Squire: Being a teacher of high school students; to see them go off and do well.

Sandler: Turning something scary (her heart condition and fear of sudden death) into a way to articulate what is important generally (not just specifically) about free and open source software.