Open source: from side to center stage

It was 1997 when I received an email from my brother asking me if I had heard of Linux. At the time, I had not, but soon after I was browsing through a computer store when I happened upon a box that contained "Red Hat Linux 5.0." I brought it home and tried to install it, but I couldn't get a graphical interface going and gave up. I dismissed it... for the time being.

A couple of years later, I was in the same store and picked up Red Hat Linux 6.1, which I still have. I got it installed on an older computer in the office, and was able to get Konqueror and Mozilla to work on this installation. I experimented with Star Office too, which was one of the leading productivity suites at that time.

A couple more years later, I used Linux to build Franklinville Central  School district's first production Linux server. It was a content filter. A friend had told me that Linux is like an erector set that you can use to build almost any software solution with. It was a great analogy then and holds even more true today. Along with the use of Red Hat Linux 6.1, I began to learn more and used any resource I could get my hands on to learn more about the operating system Linux. I built webservers, network attached storage devices, terminal servers, MythTV boxes, and more. I embraced software like Star Office, and later OpenOffice.org, and advocated for their use in K-12 education wherever and whenever I could. I demonstrated Linux and open source software to churches and other non-profits. I was even able to convince others it was a great idea to use open source. 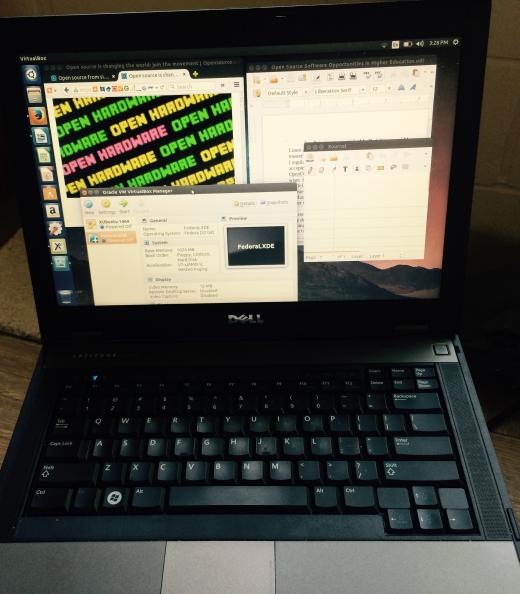 Most importantly, I became sold on the idea of the open source ethos. I have always loved helping other people, and here was a group of people dedicated to doing just that. How could I not love that?

Over the last fifteen years, I've tailored most of what I do personally and professionally to the open source way. It puts the needs of others first in my life, and I love showing people how they can use a secure and stable operating system on new or aging hardware to accomplish all of their technology needs and desires. I've also seen the open source community grow and hundreds of new, and constantly improving, projects and products emerge. I'm a regular user of OpenOffice and LibreOffice. And, I use Firefox, Audacity, OpenShot, VirtualBox, Wordpress, Drupal, Moodle, and more!

It's been exciting to see open source software and the open source way arrive from the periphery to center stage.