Audio and video with XJadeo

In my All About Audio article, I covered the basics of organizing audio in Kdenlive with the intent to round-trip the soundtrack out to a proper audio editor and mixer to produce a mixdown. Since that series of articles was specifically about Kdenlive, I only mentioned XJadeo as the video viewer during an audio mix, so it's high time to return to the topic now with a little more attention given to the tools outside Kdenlive that help you produce great sound for your motion pictures. That's exactly what this and next month's article will address.

Before taking sound out of your editor, though, there are some best practices you should follow. In my screenshots I'll use Kdenlive, but the principles apply no matter what video editor you're using.

Whilst editing, keep your audio tracks separate from one another according to their categories. Depending on the size and scope of your project, this may mean having two tracks for dialogue, two for sound FX, and two for temp music, or it might mean having four for each. Use your best judgment.

It's especially helpful to standardize which character's dialogue gets assigned to a specific track. For instance, if Kathy has the first line of the movie, you probably dropped her dialogue on A1 by default, so keep all of her dialogue on A1, no matter what. If she is speaking to Thomas, keep his dialogue on A2. If the next scene cuts to two entirely new characters, follow the same trend (one character per track). I wouldn't bother creating dedicated tracks for every single character in your movie; just have enough so that in each scene, each character can have their side of the dialogue on a track that is separate to the characters being conversed with.

This takes some planning prior to editing; look through the script and see which characters have dialogue scenes together, or if you have no script then review the footage. Make a general plan of how many dialogue tracks you will need. Don't drive yourself crazy trying to stick to this plan if two characters step on each other's lines, and don't panic if you put Kathy on A1 at first and then at the end of the film she's on track A3. Just isolate the characters as much as you can, and be consistent within each scene. If you can be consistent throughout, then so much the better. 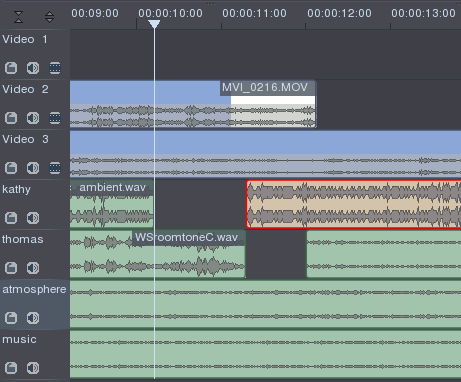 Naming your tracks is a big help. It keeps the sound organized and frees you from having to overthink the issue and concentrate on what is truly important for you: editing a great show.

It's tempting to sneak in a little audio mixing while you work. Don't do it. If you do (and you shouldn't), then make sure to clear it before you hand over the audio tracks; no audio engineer should ever have to try to reverse what the video editor has done to a soundtrack. 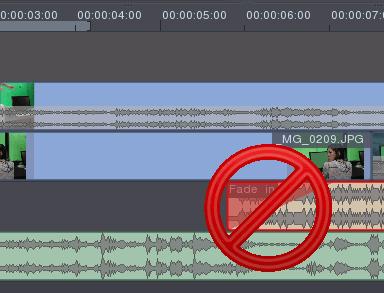 This isn't audio editor elitism; it's that those mixes become baked in one you hand over the audio. Your audio editor cannot undo the audio fades and gains and level adjustments and effects that you do in your video editing application. It might sound better than the raw audio to you, but it screws up the audio mix in the end, or it causes unnecessary delays because the audio editor has to contact you to get a fresh copy of the audio, splice it back in, and so on. If you're an independent artist, the audio editor and the video editor may be the same person (yourself), so you really don't want to get them angry at one another.

Personally, I think temp music and temp sounds are cruft from the start. They confuse the audio editing process and put false expectations on what the music will be like. Not everyone agrees with me. From a strictly technical point of view, sound effects and temp tracks are O.K., but keep them on their own dedicated tracks.

My first impulse is almost always to treat temp FX and music as for-reference only. I assume that I am expected to throw them out and replace them with properly licensed sounds, and that the music is going to be delivered and/or mixed in by the composer. So be clear on the state of these things.

Therefore, the right way to export sound from your modern video editing application is to export full tracks from 00:00:00:00 to the natural end of the track, one by one. In the end, you have several isolated audio tracks, each with an inordinate amount of silence in them to fill up the gaps, but they will all be roughly the same length and they will all start at timecode 00:00:00:00 and go on for as long as they need to.

In Lightworks Pro, you must mute tracks from the Audio Mixer interface, and then export the audio through the mixer (do not bypass it).

High quality audio is desirable. Do not hand an audio engineer MP3 or AAC exports. Export everything as something standard and uncompressed, such as WAV or FLAC.

It's often less important than you might think, but it is nice to have reference video. To create a reference video, just export a compressed a copy of your current video edit with the audio tracks excluded). Standard definition is probably fine; HD is nice but it will take more resources to playback, and audio editing isn't exactly lightweight itself.

If you can get a timecode burn-in, that's even better.

In Kdenlive or any editor that uses frei0r effects:

XJadeo is a video player that uses the JACK transport as its clock source. JACK (Jack Audio Connection Kit) is a system-wide audio playback technology designed to ensure that disparate sources of sound (like software synths, samplers, and digital audio workstations) play in unison. It can be installed from your distribution's application repository or software center; just search for "jack" or "jack-audio". While you're at it, install QJackCtl as well; on most distributions, this will automatically pull in JACK.

Start JACK either from a shell or with a frontend, like QJackCtl. Once JACK is running, start XJadeo and verify that it will use the JACK system as its clock source; right-click on the XJadeo screen and select Sync > JACK. 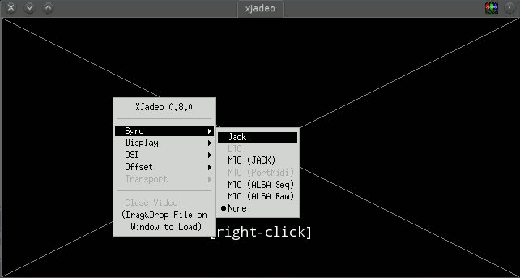 Press the spacebar to stop or start playback. Most useful controls and settings are accessible via the right-click menu, so get whatever information you need that way. 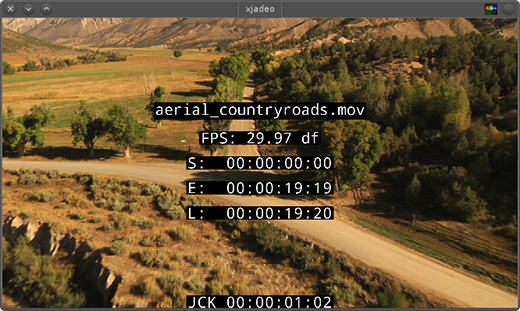 XJadeo is not an island, though; it is most useful when coupled with an audio editor. Now that you have XJadeo launched and tied to the JACK transport control, any move of the transport in a JACK audio editor will also affect XJadeo. All that's left to do is edit the audio along with the video. But for that, you'll have to wait til next month, when I cover the very good Qtractor digital audio workstation.