How to get started with Vim 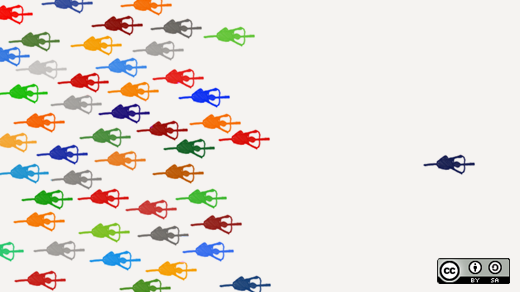 For years, I've wanted to learn Vim, now my preferred Linux text editor and a favorite open source tool among developers and system administrators. And when I say learn, I mean really learn. Master is probably too strong a word, but I'd settle for advanced proficiency. For most of my years using Linux, my skillset included the ability to open a file, use the arrow keys to navigate up and down, switch into insert mode, change some text, save, and exit.

But that's like minimum-viable-Vim. My skill level enabled me edit text documents from the terminal, but hasn't actually empowered me with any of the text-editing super powers I've always imagined were possible. And it didn't justify using Vim over the totally capable Pico or Nano.

So why learn Vim at all? Because I do spend an awful lot of time editing text, and I know I could be more efficient at it. And why not Emacs, or a more modern editor like Atom? Because Vim works for me, and at least I have some minimal experience in it. And perhaps, importantly, because it's rare that I encounter a system that I'm working on which doesn't have Vim or it's less-improved cousin (vi) available on it already. If you've always had a desire to learn Emacs, more power to you—I hope the Emacs-analog of these tips will prove useful to you, too.

A few weeks in to this concentrated effort to up my Vim-use ability, the number one tip I have to share is that you actually must use the tool. While it seems like a piece of advice straight from Captain Obvious, I actually found it considerably harder than I expected to stay in the program. Most of my work happens inside of a web browser, and I had to untrain my trigger-like opening of Gedit every time I needed to edit a block of text outside of a browser. Gedit had made its way to my quick launcher, and so step one was removing this shortcut and putting Vim there instead.

I've tried a number of things that have helped me learn. Here's a few of them I would recommend if you're looking to learn as well.

Sometimes the best place to get started isn't far from the application itself. I found Vimtutor, a tiny application that is basically a tutorial in a text file that you edit as you learn, to be as helpful as anything else in showing me the basics of the commands I had skipped learning through the years. Vimtutor is typically found everywhere Vim is, and is an easy install from your package manager if it's not already on your system.

I know not everyone will agree with this one, but I found it useful to stop using the version of Vim that lives in my terminal and start using GVim for my basic editing needs. Naysayers will argue that it encourages using the mouse in an environment designed for keyboards, but I found it helpful to be able to quickly find the command I was looking for in a drop-down menu, reminding myself of the correct command, and then executing it with a keyboard. The alternative was often frustration at the inability to figure out how to do something, which is not a good feeling to be under constantly as you struggle to learn a new editor. No, stopping every few minutes to read a man page or use a search engine to remind you of a key sequence is not the best way to learn something new.

Along with switching to GVim, I also found it handy to have a keyboard "cheat sheet" handy to remind me of the basic keystrokes. There are many available on the web that you can download, print, and set beside your station, but I opted for buying a set of stickers for my laptop keyboard. They were less than ten dollars US and had the added bonus of being a subtle reminder every time I used the laptop to at least try out one new thing as I edited.

As I mentioned, I live in the web browser most of the day. One of the tricks I've found helpful to reinforce the Vim way of navigation is to use Vimium, an open source extension for Chrome that makes Chrome mimick the shortcuts used by Vim. I've found the fewer times I switch contexts for the keyboard shortcuts I'm using, the more likely I am to actually use them. Similar extensions, like Vimerator, exist for Firefox.

Without a doubt, there's no better way to get help learning something new than to get advice, feedback, and solutions from other people who have gone down a path before you.

If you live in a larger urban area, there might be a Vim meetup group near you. Otherwise, the place to be is the #vim channel on Freenode IRC. One of the more popular channels on Freenode, the #vim channel is always full of helpful individuals willing to offer help with your problems. I find it interesting just to listen to the chatter and see what sorts of problems others are trying to solve to see what I'm missing out on.

And so what to make of this effort? So far, so good. The time spent has probably yet to pay for itself in terms of time saved, but I'm always mildly surprised and amused when I find myself with a new reflex, jumping words with the right keypress sequence, or some similarly small feat. I can at least see that every day, the investment is bringing itself a little closer to payoff.

These aren't the only tricks for learning Vim, by far. I also like to point people towards Vim Adventures, an online game in which you navigate using the Vim keystrokes. And just the other day I came across a marvelous visual learning tool at Vimgifs.com, which is exactly what you might expect it to be: illustrated examples with Vim so small they fit nicely in a gif.

Have you invested the time to learn Vim, or really, any program with a keyboard-heavy interface? What worked for you, and, did you think the effort was worth it? Has your productivity changed as much as you thought it would? Let's share stories in the comments below.

Cream is a front-end for ViM. It makes ViM act like a modern GUI text editor. For those who do not want to learn ViM's archaic commands.

The vim subreddit https://www.reddit.com/r/vim/ is a good place to ask questions and the sidebar has a few additional resources worth exploring.

I used VIM Adventures as fun way to learn when I took the dive. http://vim-adventures.com/

Two wonderful resources are http://vimcasts.org/ with excellent step by step tutorials for basic to more advanced tips.
And Practical Vim ("Edit text at the speed of thought) by Drew Neil (author of vimcasts.org)

And the other classic "Cheat sheet" alternative, the vi Reference Mug.

Have your basic commands reference to hand while still having enough fingers left to enter your vi commands, with the bonus caffeine infusion capabilities, plus the added warmth needed to type on those really cold mornings.

If only they made these in the inverted cone shaped mug with the narrow neck that makes them very spill resistant, and hold the heat in for a long time.

Hello. You were trained by an expert, or learned everything on your own. Thank you