Managers: Do you delegate or donate? 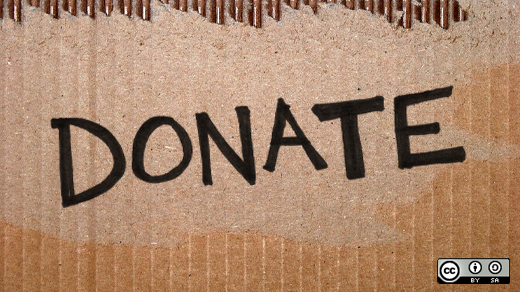 When you donate money to charities, do you call them a month later and ask them what they did with the donation?

Probably not. If you give to a particular charity regularly, then you might read the organization's annual report or quarterly newsletter to see how things are going. We want to know the money is being put to good use, but we don't expect to receive an audit of every dollar we give.

If you ask somebody to do something—what we generally call "delegating"—do you ask them how the project is going a couple of days later? I do this all the time; it comes from natural curiosity and a desire to make sure things go well. Until very recently, I couldn't imagine not doing this. Of course I'm going to ask about work for which I'm ultimately accountable, but which someone on my team is carrying out. What's wrong with that?

I've spent the last nine months in an intensive leadership development program that included many sessions with a professional coach, a mentor, and a cross functional project team outside of my normal scope of responsibility. I learned many things about myself in this process, and one of the most profound lessons for me was understanding the difference between truly giving something away (like making a donation), and mere delegation (like asking someone to do something but still checking up on it).

I had to learn this difference the hard way—many times. Let's say I asked Jane, someone on my team, to take responsibility for Project Alpha. A week later we have a conversation that goes like this:

Me: How is Project Alpha going?

Jane: It's going great, thanks for asking.

Me: Tell me more. Have you gotten input from Bob in Marketing, or from Sheila in Sales?

Jane: Um, no I haven't spoken to Bob or Sheila yet…

Me: Oh? They're really important stakeholders.

Jane: Right, I know. I wanted to wait until I had something more concrete to show them.

What's happening in this simple dialog is that, despite not getting into any real details, I've let Jane know that I don't think she's handling the project in the "right" way (that is, the way I would do it), and potentially shaken her confidence. I've also indicated that I'm going to be second-guessing her work. That's not only frustrating for her, but also sends her the message that she should check with me before she makes decisions on how to proceed. In other words, I'm indicating that I haven't really given her the project; I still want to keep it or I might take it back.

That sounds like a lot of negative outcomes for a simple "How is it going?" conversation. And, it's exactly opposite of what I really want: for Jane to feel empowered to do the project in whatever way she chooses, because I trust her abilities and judgment. That's why I gave her the project in the first place.

Why does this happen?

A focus on outcomes

It's impossible for me to ask about a project without succumbing to the temptation to reflect aloud on what I would do if I was running the project. And, since people are different, the way I would do it probably isn't the same as the way my team member would do it.

But what I really care about is the outcome of the project, not how it's done. I also want the people on my team to develop and increase their capabilities.

My coach drew me this helpful picture to serve as a reminder of what to do when I'm curious about something I've given away but don't want to "take back" the project: 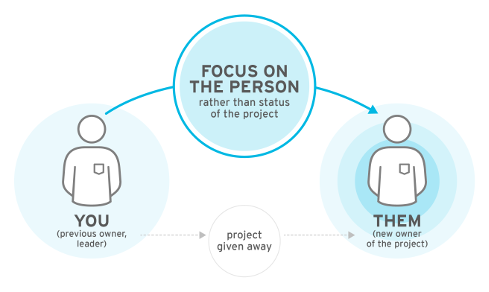 Here is the key: When you give something away, it's no longer yours to ask about. What you can do instead is ask other people about them, rather than asking about the thing itself.

You can do this many ways, including asking where they are with the project, what you can do to support them, what practical steps will move them forward, or what's getting in their way if they are experiencing challenges. This simple change can lead to profoundly different conversations. In asking about people, I'm opening the door for them to share what they want (or ask for help if they'd like), but I'm not intruding on the details of what they are doing or why they are doing it in a certain way.

Me: How are you doing with Project Alpha?

Me: How would you describe where you are right now with the project?

Jane: I'm planning out how to approach the project execution phases.

Me: Great, what does the ideal outcome look like from your perspective?

All of the questions are about Jane, what she thinks, what she wants to achieve, and how she would describe the current situation. Having questions like this in your back pocket is a great tool to help someone move forward with a project without opening yourself up to the temptation to rescind your donation.