Lessons learned from Groklaw: The power of collaboration | Opensource.com

Lessons learned from Groklaw: The power of collaboration 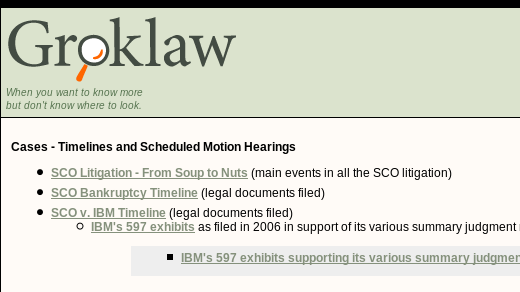 Like many, I was surprised-but-not-really when Pamela Jones announced that she would be retiring original content on the legal analysis site that grew to fame within and without the open source community as it rose to do battle with the incredibly audacious claims by The SCO Group that Linux was directly derived from UNIX.

For eight years, Groklaw was the center of the fight between Linux companies and interests and SCO's efforts to build a licensing business on the back of open source. While Novell was legally the victor in the year-long legal fight by raising its hand and reminding everyone--including SCO, it seemed--that it was they, not SCO, who actually owned the UNIX copyrights.

Yeah, that was awkward. (But pretty funny.)

The not-really-surprised part comes from the fact that Jones herself hinted on Christmas Day that she was contemplating a change for her status on Groklaw. At the time, Jones seemed disillusioned that after all of the hard work performed on Groklaw by her and the über-dedicated group of volunteers, "Novell taking money from Microsoft and contractually agreeing to show up at Open XML standards meetings and events."

At the time, I pondered that Jones should seriously reevaluate the roles she and her team of Groklaw volunteers have within the free and open source community. I did not want such a reevaluation to end with the closure of the Groklaw web site, but it seems Jones has her own ideas.

Over the years, the role of Groklaw slowly shifted from an outright anti-SCO blog to (as its readership grew) a centralized documentation repository for other ongoing lawsuits in and around the FLOSS community, complete with editorial commentary. The overarching goal of the site seems to have been relatively static: defend the FLOSS community against misinformation based on legal attacks.

To me, that's an important distinction. Groklaw did not directly stop the SCO lawsuits; that was done by the lawyers, judges, and juries in the respective cases. The important thing Groklaw did was put the breaks on business practices that could have been more immediately injurious to Linux, such as SCOsource, the IP protection scheme SCO started to generate more revenue from its alleged UNIX licenses and the alleged infringement of those licenses by Linux users.

Groklaw's deconstruction of the lawsuit and all of the related IP issues was enough to make potential SCOsource customers pause and have a "hey, what does God need with a starship?" moment. In that crucial moment, they would realize that perhaps waiting to see how the lawsuits turned out would be a better idea... and not buy a SCOsource license to use Linux. That was enough to stop any momentum of SCOsource revenue, and ultimately would make it a lot harder for SCO to fund its case.

In a world without Groklaw, would Novell, IBM, and Red Hat defeated SCO? Based on pure facts, yes. It's likely that SCO would have been defeated anyway. But a better-funded alternate-universe SCO would have made that legal battle even more arduous and convoluted than the one in our own universe. And certainly the commercial success Linux has enjoyed in the last decade would have been far more muted.

For Jones, Groklaw's mission (stopping SCO from hurting Linux) basically succeeded. So now she is closing up shop. I would have preferred that Groklaw become a more community-run site, but this is not my decision to make. Nor the readers of Groklaw. The site, really, is purely Jones' and she should do what she needs to move on.

I find myself bemused about my own reaction to Groklaw's departure. I cannot speak for others in my trade, but I will state for the record now that when Jones and Groklaw first grew to prominence, I was resentful. Who was this paralegal coming out of nowhere, reporting all this SCO news like it was just her business? How did a blog become part of the story?

I think that beyond the battle with SCO, Jones reminded me of a very valuable lesson, one that I had forgotten all wrapped up in my formal journalist guise, with all of the ego and pretensions that can come with any profession. The lesson was this: truth is truth, and it deserves to be shared. Journalists like me used to cringe at bloggers like Jones, resenting their intrusion on what was deemed our job and our job alone. But over the years I came to respect the fact that no one has an exclusive on what needs to be said. I was being a hypocrite.

Good writing is good writing. Good research is good research. And like my very first boss told me when he hired me 21 years ago to run a small-town Indiana newspaper: good reporters don't have to come with a journalism degree.

That was the lesson I (who has no journalism degree) had forgotten. Groklaw didn't set out to remind me and others like me of the power of the written word. Of the strength of collaboration. But along the way, that's exactly what the site and its creator did.

More than anything, Groklaw represents what open source collaboration can achieve.

Brian Proffitt - Brian Proffitt is the Principal Community Analyst for Red Hat's Open Source and Standards group, a team dedicated to leading open source collaboration and community building. A former technology journalist, Brian is also an adjunct instructor at the University of Notre Dame. Follow him on Twitter at: @TheTechScribe
More about me

For the sake of balance I recommend the following three articles: <a href="http://www.itwire.com/opinion-and-analysis/open-sauce/46485-groklaw-the-good-the-bad-the-ugly?start=1">iTWire: Groklaw: the good, the bad, the ugly</a> (the link leads to page 2, which raises the issue of Groklaw's funding, given that it was clearly a full-time effort); <a href="http://www.linuxpromagazine.com/Online/Blogs/Off-the-Beat-Bruce-Byfield-s-Blog/Eulogy-for-Groklaw">Bruce Byfield's Groklaw eulogy</a>, which points out one of Groklaw's fundamental flaws (a lack of understanding of business realities) and concludes that it's time for Groklaw to call it quits; and <a href="http://www.zdnet.com/blog/open-source/groklaw-accused-of-censorship/7826">this ZDNet article on Groklaw's censorship of polite, on-topic user comments</a>.

For the sake of balance I repeat my comment to Florian Mueller related to Brude Byfield's Grokla eulogy:

Frankly, I don't care whether PJ is Pamela or 100 different persons. Groklaw credibility is and always has been pretty darn sound. Groklaw articles are rich wrt references - and I invite you to present where Groklaw gets its facts and references wrong causing Groklaw embarrasment.

To be even more frank:
The Google/Oracle GPL spectacle duly put in order by Mr. Torvalds, Mr. Moglen and Mr. Stallman hardly boosted your own credibility. Attacking Groklaw does not exactly rescue you from your Huffington episode.

Your insinuations against Groklaw seems to be more problematic for your reputation than Groklaw's. Is it relevant to put the sticker clandestine somewhere? You seem to be the messenger - so why not reveal whose interests YOU represent?""

I would further like Florian Mueller to disclose his relations triggering off the TurboHercule spectacle.

It's all about regaining credibility. Isn't it?

This here is about Groklaw, not about me. I'd like to stay on topic, and since all I know about you is that you call yourself "Jack", I've already been more forthcoming about myself than you are.

If you want an example of completely inaccurate Groklaw propaganda, look at <a href="http://www.groklaw.net/articlebasic.php?story=20100408153953613">this Groklaw article on IBM's patent threats against TurboHercules</a>. Then click on the link that says "when it announced the patent pledge". It points to a statement in August 2004. But you can easily google IBM's open source patent pledge: it was made in January 2005. This means the first (and central) claim made by Groklaw in that article is wrong. IBM did not limit the scope of the pledge in any way, and certainly not with a statement that was made about five months earlier. Groklaw users pointed out that this was wrong, but the avatar named PJ refused to correct this. This is the behavior of a propagandist, not of an open source activist, not of an unbiased journalist.

This is about Florian Mueller putting a lot of effort in to discrediting Groklaw/PJ over a long period of time.

My question is:
On behalf of who? Who pays Florian Mueller to do that?

@Jack, I assure you that no one ever paid me and no one is paying me (and no one will ever pay me during the few weeks Groklaw has left) for criticizing Groklaw. Groklaw tried on multiple occasions to smear me (the first time back in 2006), so I don't need to be paid -- I simply defend myself and I try to raise the level of awareness for some rather obvious issues concerning Groklaw.

Both of y'all should register with the site to be /completely/ transparent. I'm just saying :)