Very much inspired by my interview with Bryan Behrenshausen, I’ve been spending a lot more time working with Markdown. Day-to-day, at work and at home, I usually work with either HTML or word processed documents. I’m fast with HTML and proficient with word processors, and I rarely need to convert one to the other, but I liked the idea of simplifying my process and using Markdown for everything, with pandoc to convert it.

Markdown is simple enough, but there is a learning curve, so while one of the advantages of it is that it doesn’t require any kind of special editor, the reality is that I needed something with a preview so I could make sure my syntax looked OK (which it often did not). As a result, I went through a few Markdown editors, trying to find the one I like best (and because I love a good rabbit hole).

I eventually narrowed my list to three: ReText, UberWriter, and gedit-markdown.

When choosing software, I can usually tell if something will work for me in the first hour or so of use. All three of these editors were very usable to me, which is why I wound up needing a bake-off. I still haven’t really picked one, although I do spend the most time in gedit, mostly because it’s where I do everything. And even as I’ve gotten a handle on Markdown, I appreciate the preview all three provide, just to get a sense of how the final product will look.

ReText is simple. It’s just a text window. It has a spellcheck and a live preview. It lets you natively export to HTML, ODT, or PDF. It also lets you grab the HTML as source. There’s not much to it, which I see as a feature. My main issue with it is that it’s black text on white background and I prefer white text on a dark background. There’s a CSS file that can be tweaked, but I haven’t explored that part of ReText yet. Also, Linux Setup interviewee Amy Cavender is a ReText user. 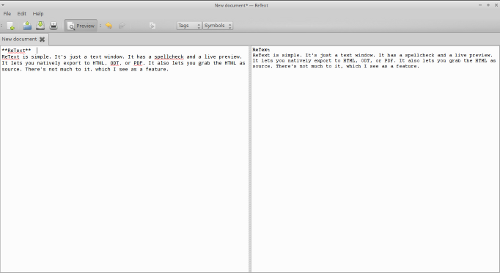 UberWriter is beautiful (as I’ve mentioned before). It’s got the same basic export options as ReText, plus an advanced export menu I’ve never had to use. It has spellcheck, a running word count, and a dark mode. It also lets you copy the Markdown into HTML without having to do a formal export, which is a nice feature. There’s also a focus mode, which puts an emphasis on your current line and de-emphasizes previous ones.

It’s great, but I have a few issues with UberWriter. One is that it doesn’t remember the dark color scheme—it has to be set each time it’s open. I think it’s under review as a feature, though. There’s also no search and replace ability, although that’s also on the roadmap. Another issue is that there’s no preview for me, which I believe is because I’m on Ubuntu 12.04 and there’s some kind of dependency issue (I’m not sure it’s supported for 12.04, although it runs fine otherwise).

UberWriter is $5 through the Ubuntu Software Center and despite those few issues, it’s well worth the money. 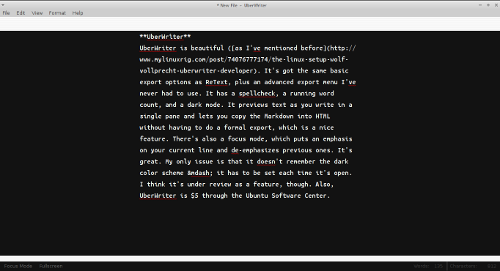 gedit-markdown is gedit with a preview window. The preview isn’t live—you have to manually update it, but other than that, it does everything gedit does, which for me, a gedit lover, is a nice thing.

I assumed that as I got used to Markdown (it’s really not super complicated), I’d just phase out the preview window, but it’s actually proven to be very helpful to me, just in terms of checking the formatting of stuff I’m writing. 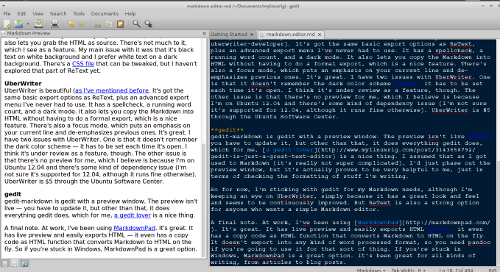 So for now, I’m sticking with gedit for my Markdown needs, although I’m keeping an eye on UberWriter because it has a great look and feel and seems to be continually improved. But ReText is also a strong option for anyone who wants a simple Markdown editor.

What to read next
Tags
Text editors
Steven Ovadia