How to get started with Kubernetes

Getting started with Kubernetes

Learn the basics of using the open source container management system with this easy tutorial.

One of today's most promising emerging technologies is paring containers with cluster management software such as Docker Swarm, Apache Mesos, and the popular Kubernetes. Kubernetes allows you to create a portable and scalable application deployment that can be scheduled, managed, and maintained easily. As an open source project, Kubernetes is continually being updated and improved, and it leads the way among container cluster management software.

The following tutorial will explain the basics of creating a cluster, deploying an app, and creating a proxy, then send you on your way to learning even more about Kubernetes.

Begin by using the Kubernetes-provided tutorial to create a cluster and deploy an app. This cluster will consist of a master and one or more nodes. In the first scenario, you'll create a cluster using a utility called "Minkube," which creates and runs a cluster on a local machine. Minikube is great for testing and development. You will also use the kubectl command, which is installed as part of the Kubernetes API.

In the interactive terminal, start the Minikube software with the command:

View the cluster information with the command: 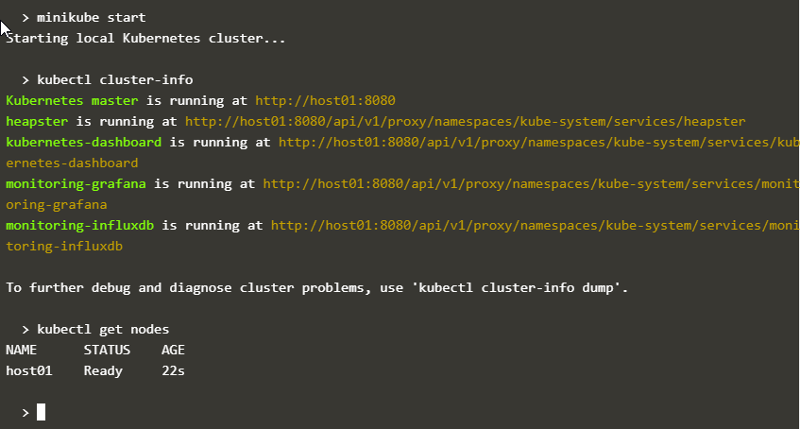 The screenshot above shows the output from these commands. Note the only available node is host01, which is operating as the master (as seen in the cluster-info output).

In the next step in the interactive tutorial, you'll deploy a containerized application to your cluster with a deployment configuration. This describes how to create instances of your app, and the master will schedule those instances onto nodes in the cluster.

In the interactive terminal, create a new deployment with the kubectl run command:

This creates a new deployment with the name kubernetes-bootcamp from a public repository at docker.io and overrides the default port to 8080.

View the deployment with the command:

The deployment is currently on a single node (host01), because only that node is available.

In the third part of the tutorial, you will create a proxy into your deployed app. A pod runs on an isolated private network that cannot be accessed from outside. The kubectl command uses an API to communicate with the application, and a proxy is needed to expose the application for use by other services.

Open a new terminal window and start the proxy server with the command:

This creates a connection between your cluster and the virtual terminal window. Notice it's running on port 8001 on the local host.

Return to the first terminal window and run a curl command to see this in action:

The JSON output, shown in the screenshot above, displays the version information from the cluster itself.

Follow the online tutorial to find the internal name of the deployed pod and then query that pod directly. You can also get a detailed output of your pod by using the command:

Kubernetes is a full-fledged deployment, scheduling, and scaling manager and is capable of deciding all of the myriad details of how to deploy an app on your cluster. The few commands explored here are just the beginning of interacting with and understanding a Kubernetes deployment. The crucial takeaway is how fast and easy it is to do and how few details you need to provide to use Kubernetes.

Follow the online interactive tutorial to learn more about how Kubernetes works and all that you can do with it.

Ben Finkel - Ben has worked in software development for 18 years within a variety of industries, including banking/finance, insurance, and healthcare. He is a Google Certified Trainer and currently creates tech training videos for CBT Nuggets. Before that, he was a software...
More about me

what is difference between proxy and service, if we create service it serves same purpose??