If I am not wrong, one of the variants of Murphy's Law goes something like: "The tags in a music library are never correct." In previous articles, I have looked at ways to manage tags when ripping (before the problems get into the music library) and directly within music playback software. In this article, I'm going to look at some special-purpose tag management tools that can make music listening more enjoyable.

In my experience, these tag management tools serve a particularly useful purpose that is best understood by first considering what can go wrong with tag management as implemented in ripping and playback software.

Consider first the business of sorting a music collection based on album titles. Some players just sort on the exact title, which means that all my albums that start with "The" end up sorted together. Other players have a "word blacklist" mechanism to exclude specific words from title sorting. And a third group of players permits the definition of a tag called something like "album sort order" and use that tag for sorting. Of course, the same holds true with artist names.

Given those three different approaches to sorting, it's tempting to edit the tags available in the music player so that it behaves as you want it to. But when you switch to a different music player, the previously optimal results might no longer look so good.

Standalone tag editors can be a point of stability in this process. Moreover, music files that are ripped from a CD or purchased for download may not be tagged according to the user's preference, and a standalone tag editor allows you to fix the situation before you import the files into the music library. This is particularly useful in two cases:

To provide an example, I purchased a download of Vivaldi's L'Estro Armonico, performed by Brecon Baroque and directed by Rachel Podger, from Channel Classics.

These days, EasyTag seems to be my go-to tag editor. While I can't claim to have tried them all, I have mostly stopped looking now that I have this one. Generally speaking, I like its three-panel layout: file system directory on the left; selected tracks in the middle, showing file name and tags; and specific tags and cover image on the right. 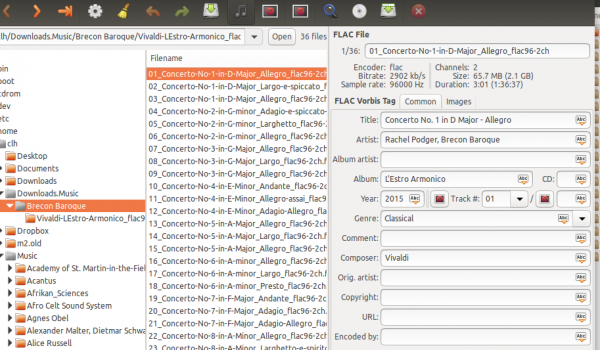 In the above image, note that the first track is automatically selected when I select the album directory in the left panel. Note also that in the right panel the Artist tag is structured as "director name, ensemble name," and that the Album artist field is blank. I like to have both the Artist and the Album artist tags set, and I also like to have the ensemble name first. So, I select all the tracks in the center panel and make the required changes to all tracks by clicking on the [Abc] icon to the right of each field: 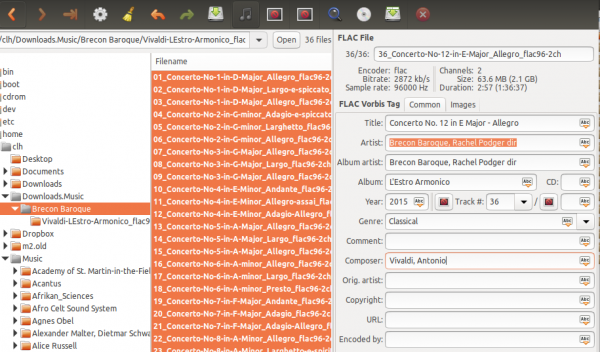 Changing the Artist tags for all selected music files with EasyTag

At this point, I can see also that there are no images associated with the album because there is not a number in parentheses to the right of the Image tab. To fix that, I select the Image tab and then use the [+] icon at the bottom of the screen (not visible in the screenshots) to add the cover image:

Adding an image for the selected music files in EasyTag

Finally, I click the [Save] icon on the top toolbar to write the changes.

This would be a good moment to mention the kinds of problems that can creep in at this stage. 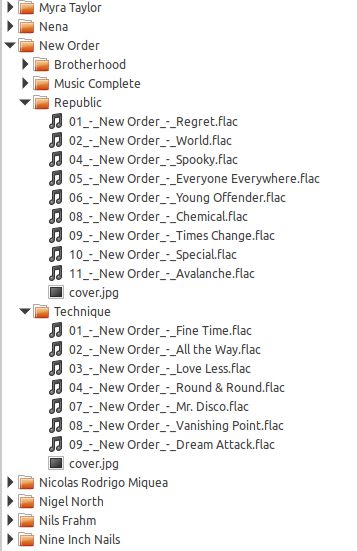 File structure showing the cover image in the proper location

There is an MPD client that tries to find cover art in a .covers folder in the user's home directory, with the name formed from the artist name, followed by a hyphen, followed by the album name, as sourced from the track tags. That MPD client can be confused by other hyphens occurring in the artist or album name. To avoid fooling that client, I always try to remember to remove any hyphens from the relevant tags. And of course, I try to remember to copy the correct cover.jpg file over to my .covers folder, properly named.

Finally, with classical music, I always try to make sure the composer name shows up in the Album tag. I forgot to do so in the above example, so now that I'm sitting and listening to this album, I used the music player tag editor to make that one last change.

ExFalso is another good tag editor. It also uses a three-panel layout, showing the file system hierarchy in the top left panel, the tracks in the lower left panel, and the tags from the selected tracks in the right panel. 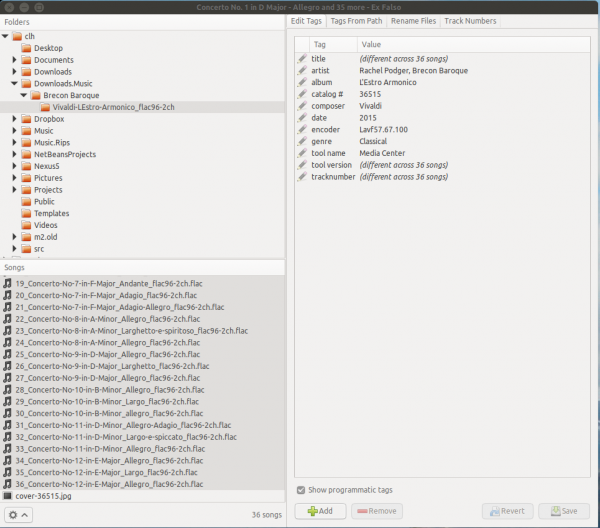 Tags are edited by selecting the tag of interest in the right panel, then double-clicking on the current value and changing it, and finally writing it to the selected tracks by clicking on the [Save] icon at the bottom of the right panel. Tags with changed values show up with bold [Pencil] icons. 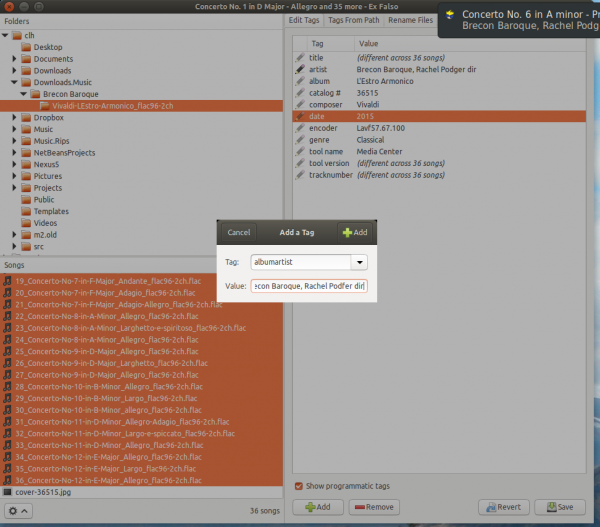 Once the tag is added to the collection with the popup dialog, errors—e.g., typing Podfer instead of Podger—can be corrected right on the right panel.

Note that some tags show up in ExFalso that were not visible in EasyTag (encoder, tool name, catalog #). People who want a lot of flexibility in managing their tags may find ExFalso to be a better choice.

For missing cover art, ExFalso provides a popup on selected tracks to download images, which results in a dialog like this: 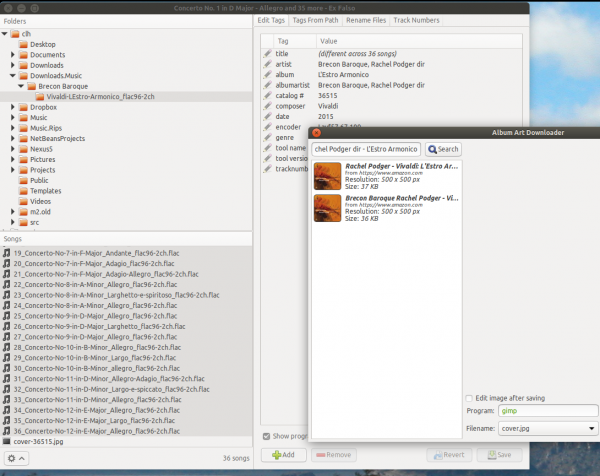 I have not used this feature a lot, so I can't say how reliably it finds cover art. I know that other programs that download cover art often get the wrong image, especially for more obscure works. However, it appears that the file chosen is downloaded with the desired name (cover.jpg), but the tracks are not updated to be associated with that name.

Both EasyTag and ExFalso do a nice job of editing tags. In addition to the features I described above, both offer the ability to automate tagging operations. I lean toward EasyTag, as it seems to do a more complete job of associating cover art with tracks, but that may just be my unfamiliarity with ExFalso talking.

There are of course other tagging tools out there, including command line tools, that I haven't looked at yet.

As always, I invite readers to share comments about their favorite music tagging and cover art editing programs.

And about the music...

So what about that L'Estro Armonico mentioned above? The Brecon Baroque/Rachel Podger version is the second I own; many years ago I acquired this work on CD performed by the Academy of Ancient Music (AAM). It's fair to say that I am a pretty big fan of Vivaldi, but it's equally fair to say that it's not the kind of music I listen to when I'm hoping to relax or fall asleep. To me, Vivaldi is not ideal background music (despite the tendency of restaurants to play The Four Seasons at Sunday brunch). I was attracted to Brecon Baroque's fresh performance of this work by the review in Gramophone. The AAM performance seems to me to be somewhat distantly recorded and lacking in sparkle, which could be an artifact of its transfer to CD back in the "bad old days" of analog-to-CD transfers. Regardless, I highly recommend the Brecon Baroque performance—it is a lovely, engaging performance.

Another recent acquisition is Voces8's Lux. Voces8 is new to me, recommended by a friend. They seem very talented and I am pretty sure this is the first time I have ever heard "Massive Attack" performed by an unaccompanied choral group (the fourth track on the album). A surprise and a real treat. I purchased this album download from ProStudioMasters (to get a high-resolution version) and had to borrow a Windows computer to do the download. Really, I'd like to do more business with ProStudioMasters, but as long as they require their customers to use a different operating system (or maybe Wine but whatever) to download purchases... hmm.

All images are screenshots by the author, published under fair use.