Time-series databases like InfluxDB are ideal for managing things that generate a lot of data that changes over time.

Infrastructure environments' needs and demands change every year and systems become more complex and involved. But all this growth is meaningless if we don't understand the infrastructure and what's happening in our environment. This is where monitoring tools and software come in; they give operators and administrators the ability to see problems in their environments and fix them in real time.

But what if we want to predict problems before they happen? Collecting metrics and data about our environment gives us a window into how our infrastructure is performing and lets us make predictions based on data. When we know and understand what's happening, we can prevent problems, rather than just fixing them.

Before we can use this data, we need to figure out how to collect and store it. For example, if we want to collect data on the CPU usage of 100 machines every 10 seconds, we're generating a lot of data. On top of that, what if each machine is running 15 containers and you want to generate data about each of those individual containers too? What if we want to generate data per process? This is where time-series data becomes helpful. Time-series databases store time-series data. But what does that mean? We'll explain all of this and more, plus introduce you to InfluxDB, an open source time-series database. By the end of this article, you will understand:

Example of a table, or how a RDBMS like MySQL stores data.
Image from DevShed.

If you're familiar with relational database management software (RDBMS) like MySQL, tables, columns, and primary keys are familiar terms. Everything is like a spreadsheet, with data in columns and rows. Some data might be unique, other parts might be the same as other rows. Relational databases are widely used and great for reliable transactions that follow ACID (atomicity, consistency, isolation, and durability) compliance and data you could model in a table. You might update certain data by overwriting and replacing it.

But what if you're collecting data on something that generates a lot of data, like a self-driving car, and you want to watch how the data changes over time? The car is constantly collecting information about its environment. It takes this data and it analyzes changes over time to behave correctly. The amount of data might be tens of gigabytes an hour. While you could use a relational database to collect this data, when it comes to scaling and usability of the data you're collecting, an RBDMS isn't the best tool for the job.

Why time-series is a good fit

This is where time-series data makes sense. Let's say you're collecting data about a city's traffic, temperature from farming equipment, or the production rate of an assembly line. Instead of putting the data into a table with rows and columns, imagine pushing multiple rows of data that are uniquely sorted with a timestamp. This visual might help make more sense of this:

Imagine rows and rows of data, uniquely sorted by timestamps.
Image from Timescale.

Having the data in this format makes it easier to track and watch change over time. When data accumulates, you can see how something behaved in the past, how it's behaving now, and how it might behave in the future. Your options to make smarter data decisions expand!

Curious how the data is stored and formatted? It depends on the time-series database you use. InfluxDB stores the data in the Line Protocol format. Queries return the data in JSON. 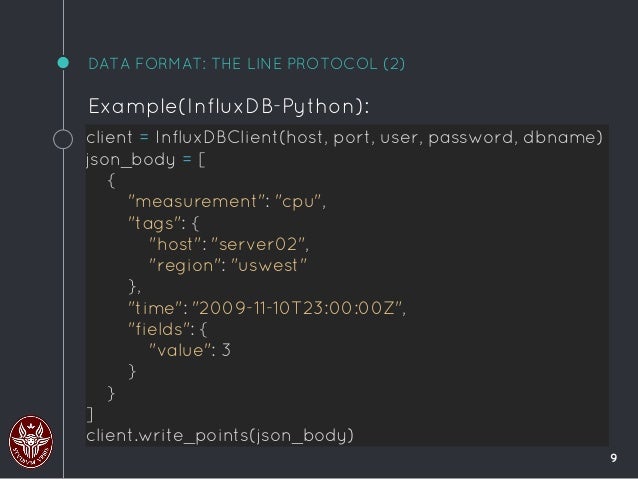 To learn more about time-series data or why you would want to use it over another solution, Timescale and InfluxData offer excellent, in-depth explanations.

InfluxDB is open source time-series database software developed by InfluxData. It's written in Go (a compiled language), which means you can start using it without installing any dependencies. It supports multiple data ingestion protocols, such as Telegraf (also from InfluxData), Graphite, Collectd, and OpenTSDB. This leaves you with flexible options for how you want to collect data and from where you're pulling it. It's also one of the fastest-growing time-series database software options available. You can find the source code for InfluxDB on GitHub.

Let's take a look at using three tools in InfluxData's TICK stack to build a time-series database and begin collecting and processing data.

InfluxData's platform is based on four open source projects that work and play well with each other for time-series data. By using them together, you can easily collect, store, process, and view the data. The four pieces of the platform are known as the TICK stack, which stands for:

These tools work and integrate well with the other pieces by design. However, it's also easy to substitute one piece out for another tool of your choice. Here, we'll explore three parts of the TICK stack: InfluxDB, Telegraf, and Kapacitor. 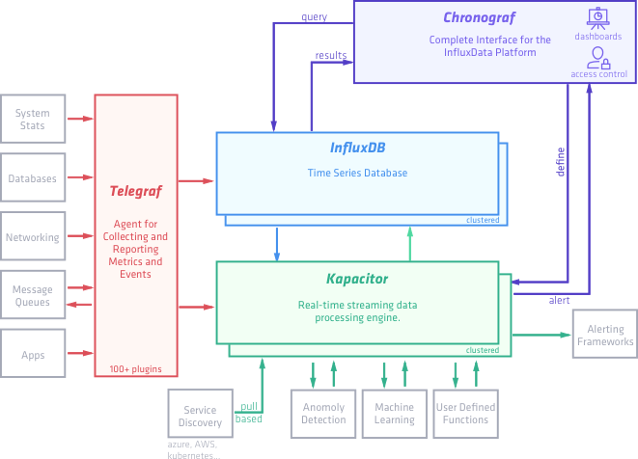 Diagram of how the different components of the TICK stack connect with each other.
From influxdata.com.

If InfluxDB is where all your data is going, you first need a way to collect and gather the data. Telegraf is a metric collection daemon that gathers various metrics from system components, Internet of Things (IoT) sensors, and more. It's open source and written completely in Go. Like InfluxDB, Telegraf is written by the InfluxData team, and it's built to work with InfluxDB. It also includes support for different databases, such as MySQL/MariaDB, MongoDB, Redis, and more. You can read more about it on InfluxData's website.

Telegraf is modular and heavily based on plugins. This means that Telegraf is as lean and minimal or as full and complex as you need it. Out of the box, it supports more than 100 plugins for various input sources (including Apache, Ceph, Docker, Iptables, Kubernetes, Nginx, and Varnish), processing, and outputs.

Even if you're not using InfluxDB as a data store, you may find Telegraf a useful way to collect data and information about your systems or sensors.

Now we have a way to collect and store our data. But what about doing things with it? Kapacitor is the piece of the stack that lets you process and work with the data in a few different ways. It supports both stream and batch data. Stream data means you can actively work and shape the data in real time, even before it makes it to your data store. Batch data means you can retroactively perform actions on samples or batches of the data.

One of the biggest pluses for Kapacitor is that it enables real-time alerts for events happening in your environment. CPU usage overloading or temperatures too high? You can set up several different alert systems, including but not limited to email, triggering a command, Slack, HipChat, OpsGenie, and many more. You can see the full list in the documentation.

Like the other TICK stack tools, Kapacitor is open source; you can read more about the project in the README.

Packages are available for nearly every distribution. You can install these packages from the command line. Use the instructions for your distribution.

For help with other distributions, see the Downloads page.

Now that you have the tools installed, you can experiment with some of them. There's plenty of upstream documentation on all three projects:

Additionally, for more help, you can visit the InfluxData community forums. Happy hacking!

Improve your database knowledge with this MariaDB and MySQL cheat sheet

Install MariaDB or MySQL on Linux

5 MySQL features you need to know

3 ways to use PostgreSQL commands

Getting started with PostgreSQL