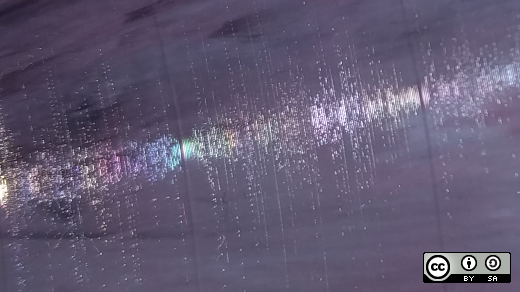 November rains have given way to December sunshine, Pacific Northwest-style—fog, that is. Fog so wet it drips, so a newcomer could be forgiven for thinking it’s raining.

Rain, fog, meh—I’m still in the mood to digitize a few vinyl records. I’ll pick up where I left off last time, with "Voodoo Chile" from my mint copy of "Electric Ladyland," a 33⅓ RPM vinyl LP. As I have said before, the vinyl LP is one of the great open source music formats, and I seem to have all the gear set up and ready to go, so...

Fair warning—cleaning records is fiddly and time-consuming. Worth it? I think so, but not all would agree.

Vinyl records get dirty. In fact, they come dirty from the factory, and if we’re not careful, it’s all downhill from there. And this dirt is bad news—it makes itself known as noise during playback of the record, and it causes premature wear on the diamond stylus of the phono cartridge and on the surface of the record itself. The dirt on a record fresh from the factory is left over from the pressing cycle, and in my experience, it also encourages static buildup on the record, which adds to the noise level and diminishes the enjoyment of the playing experience.

Record cleaners come in two broad styles: those designed to deep-clean the gunk out of the record, and those designed to brush the fluff off just prior to playing. They vary in price from free (a clean facecloth, for example; not recommended) to basic velour pads that cost a few dollars to ultrasonic cleaners like those used for machinery and jewelry, which can cost thousands of dollars. If you're inclined to make things, here is an informative article on DIY Audio about building an ultrasonic record cleaner.

Being somewhat of a skinflint, I have so far settled on an inexpensive and completely manual solution to the deep cleaning problem: a SpinClean. The image below shows it ready to go, sitting on my freshly cleaned kitchen counter. (I suppose I should have included a step zero—clean the kitchen counter; records do not benefit from toast crumbs or tomato sauce.) 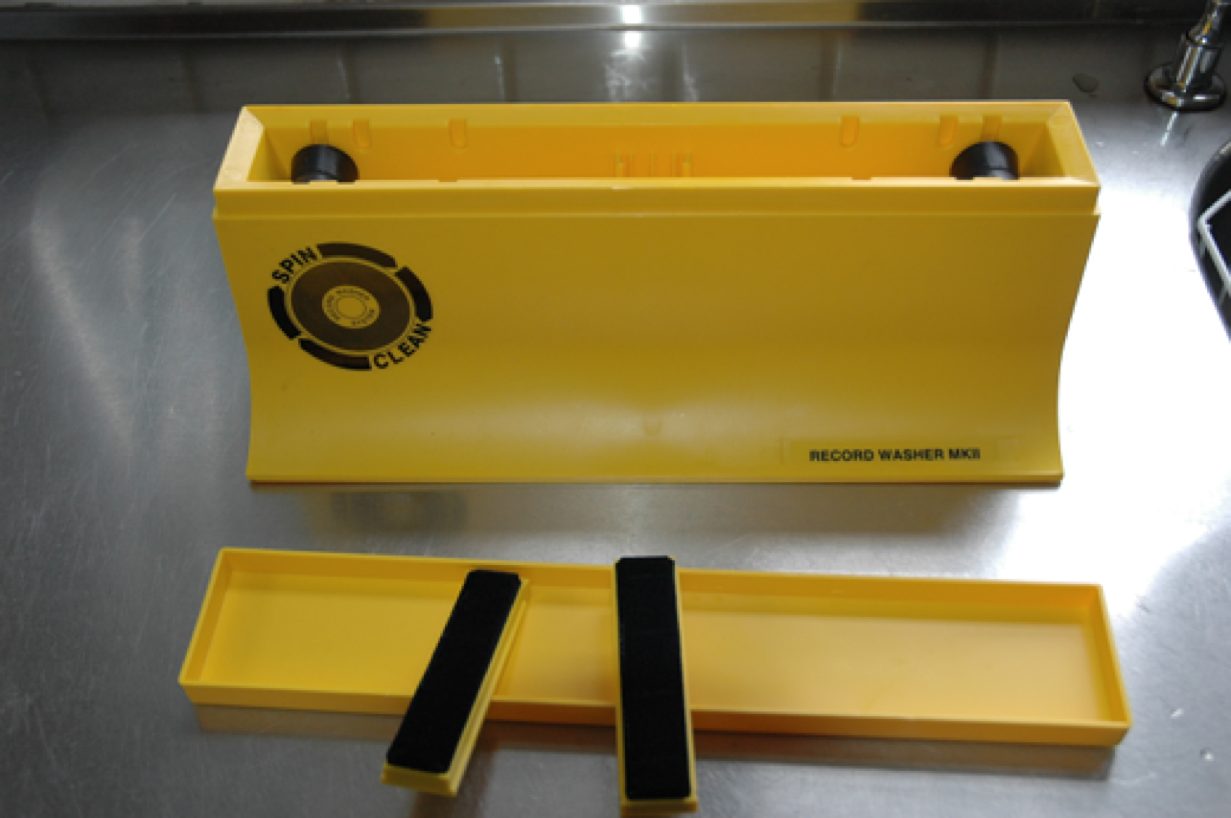 In the above image, note the long, narrow well with black rollers at either end. The record rests on these rollers when in operation. The velour cleaning pads, sitting on the lid of the cleaner in the lower part of the image, slide into the vertical slots just visible in the middle of the well, one on each side, and groom both sides of the record at the same time.

The process is straightforward:

The image below shows a copy of "Electric Ladyland" in the well, ready for cleaning: 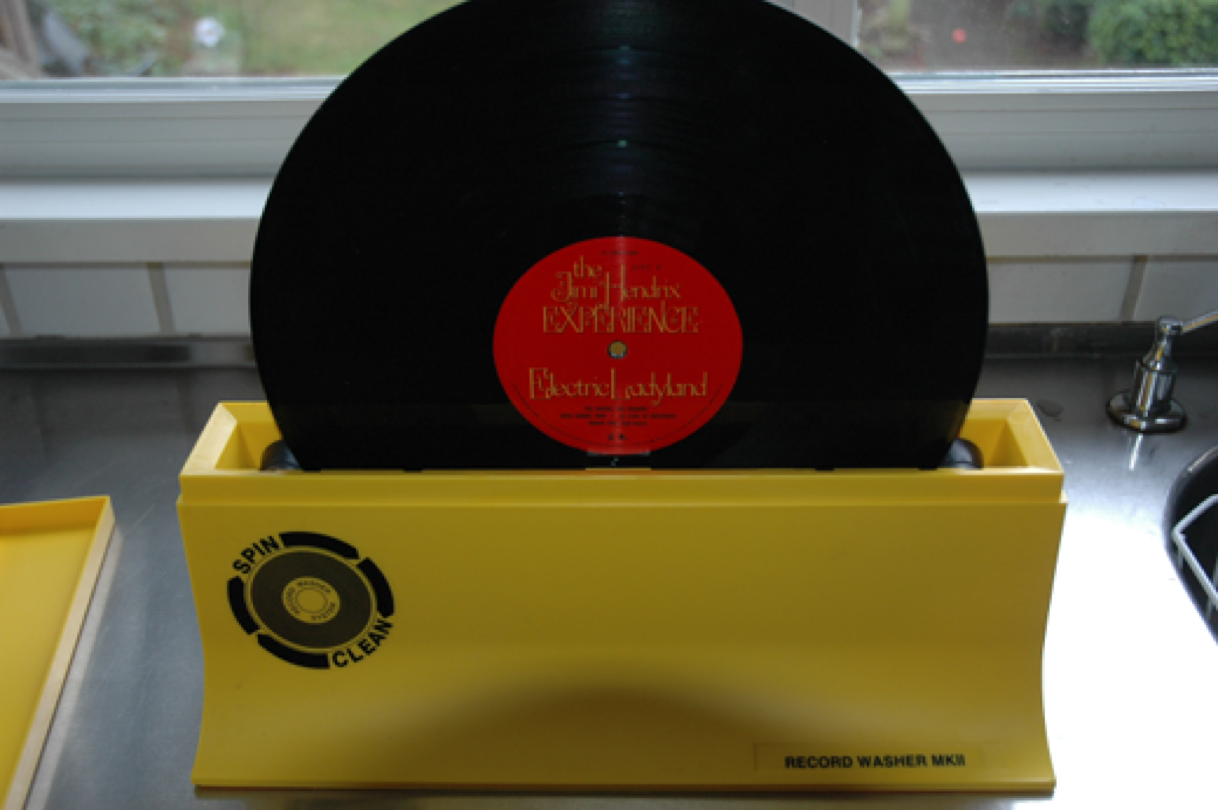 Record about to be cleaned in the SpinClean

Once your records are clean and fully dry, grab some nice new record sleeves to put them in. Don’t re-use the old sleeves, no matter how fancy and wonderful they look. Remember, they came from the factory with two dirty records inside. The image below shows the two records in their new sleeves, ready to be recorded (or put away): 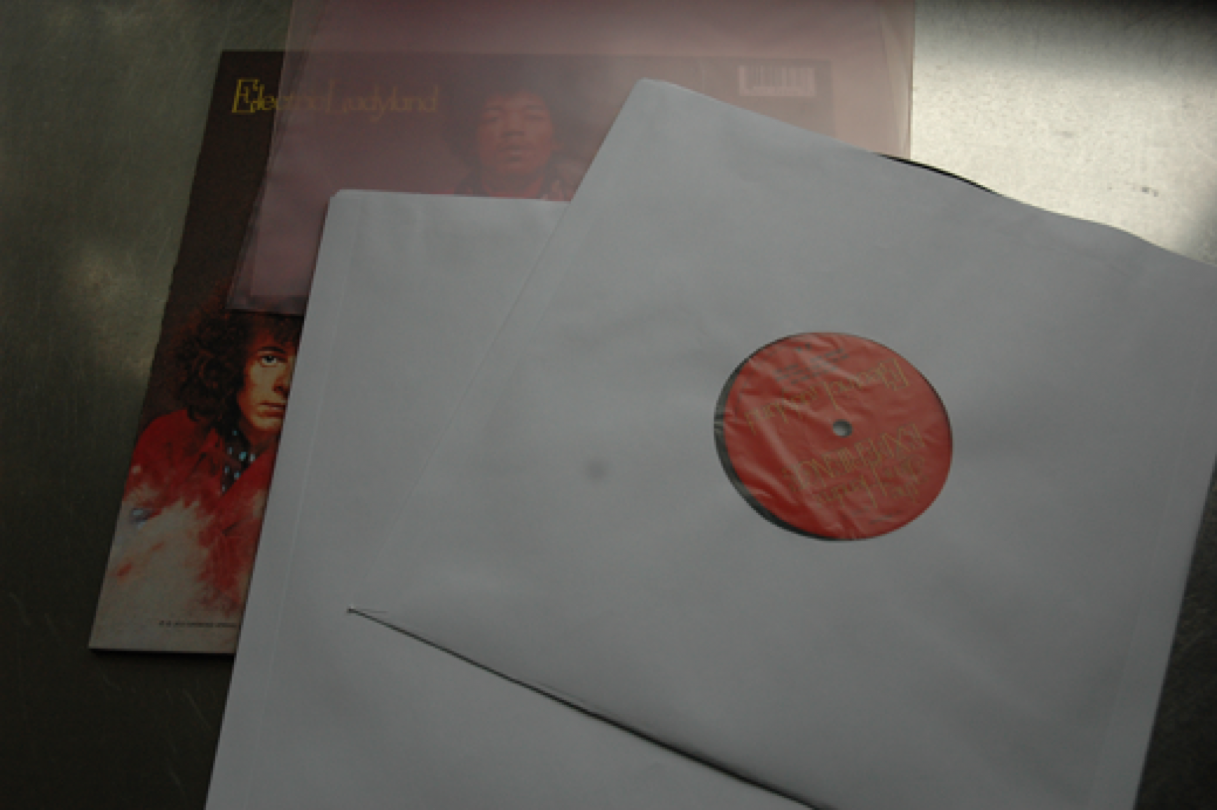 After cleaning, be sure to place records in new sleeves.

Once I finished cleaning "Electric Ladyland," I cleaned two additional new records sitting in the pile of recent acquisitions. The image below shows the particles of grunge that washed off the four record surfaces that I cleaned in this session: 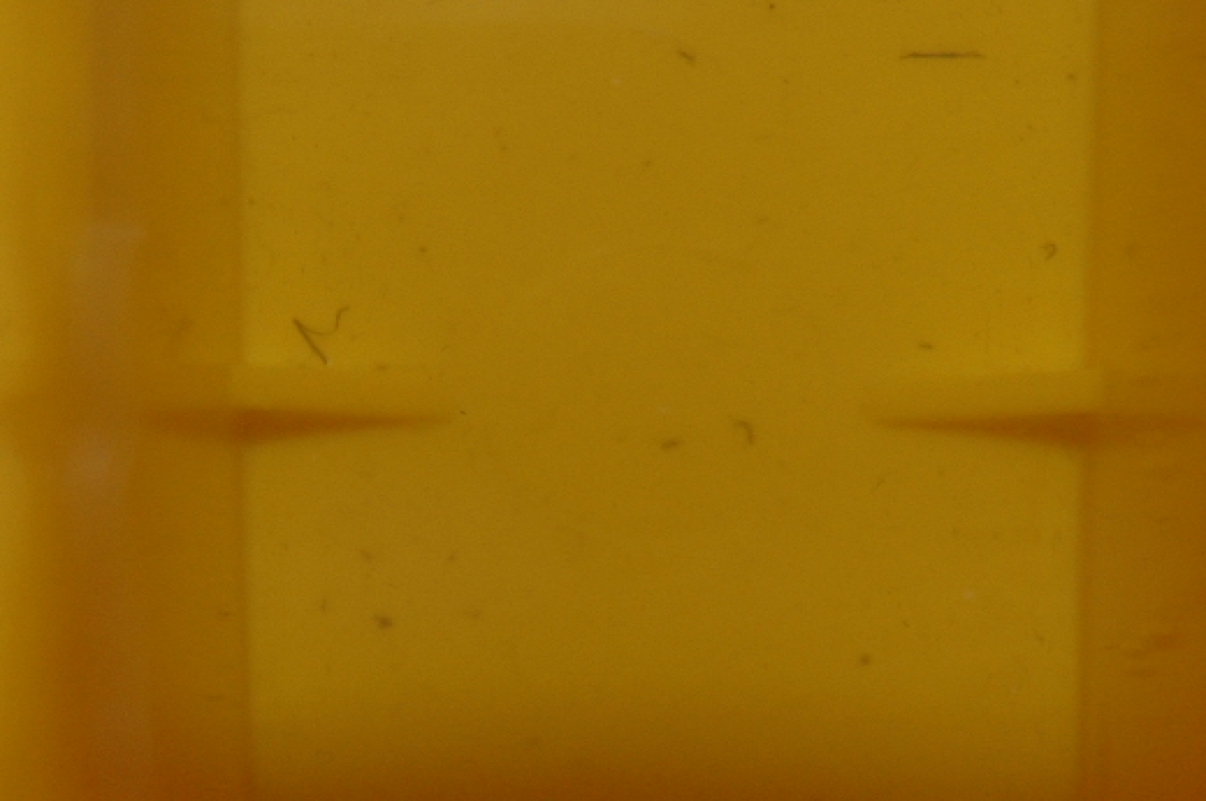 Some of the dirt removed from records cleaned in the SpinClean

Once the records are clean and ready to go, it’s time to make sure all the electrical connections are made and working. The diagram below shows my basic recording chain, in schematic form: 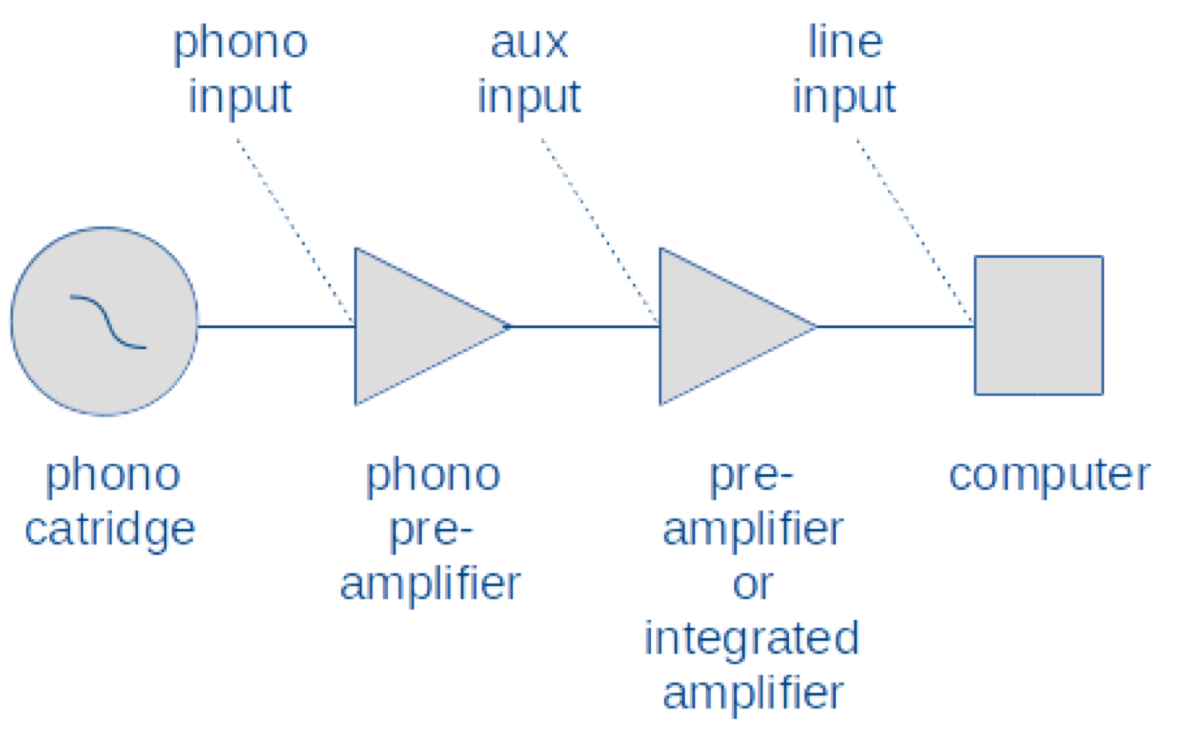 Setting up Audacity and recording

Of course, open source software is involved in digitizing the vinyl record. As I mentioned previously, I use Audacity for this purpose. This would be a good time to review Audacity’s sample workflow for LP digitization.

Next, let's check a few configuration details. Unfortunately, I’ve misplaced my ASUS Xonar DX sound card, so I’m going with the line-in provided by my old Dell motherboard. I’m also going with a direct connection to ALSA. With a bit of experimenting, I discover that the maximum sample rate supported by my built-in sound card is 48kHz and the maximum bit depth is 16 bits. (Gotta find that Xonar before I do any more of this.)

Whether or not you believe in the merits of higher-than-CD resolution audio, it’s better to use the maximum resolution available when digitizing. Once the transfer and editing is completed, you can then reduce the recording to CD quality or lower.

The image below shows my first recording attempt with Audacity: 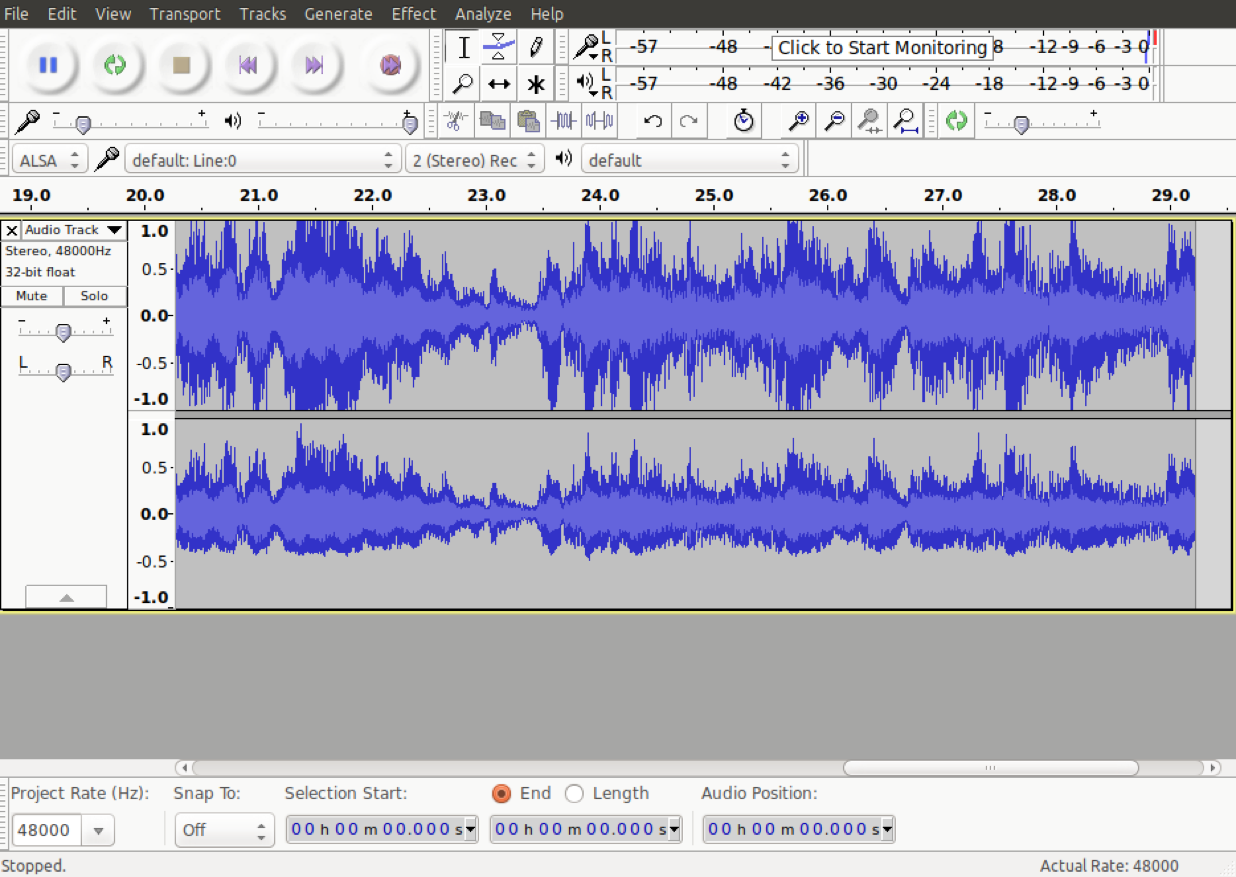 The results of my first recording attempt with Audacity

A few interesting things are visible in the above image. First, and most important, look at the top signal trace. The highest amplitude sounds, or peaks, disappear above 1.0 and below -1.0. This is called clipping, and it introduces a nasty harsh distortion into the sound. It turns out my pre-amplifier output voltage is a bit too high for my computer’s line-in, so I used my Rothwell attenuators to reduce the output voltage to an acceptable level.

The image below shows a more acceptable recording level, with no clipping: 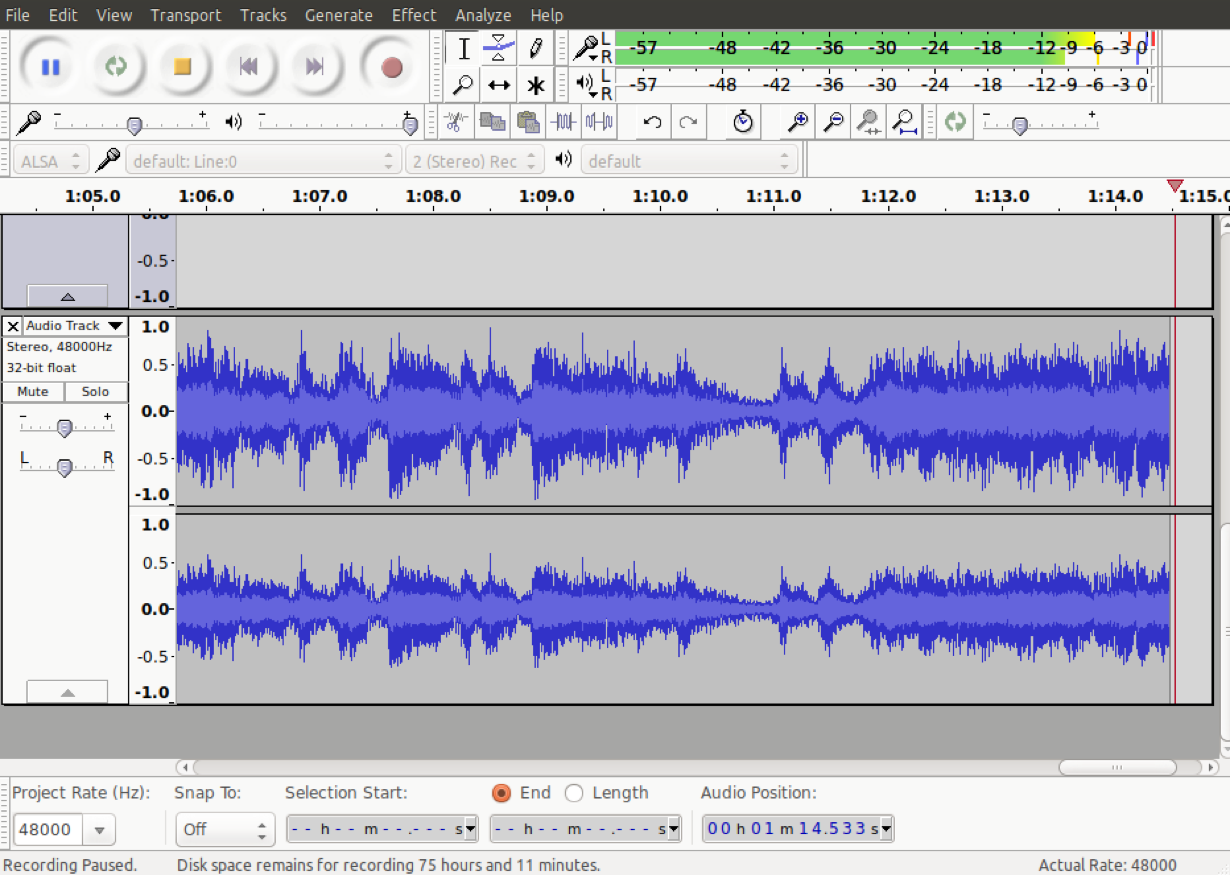 Second, the bottom signal trace looks quite odd in the first image—the peaks seem quite asymmetrical (less in the -ve direction) and in both, the overall level seems lower. This is also visible on the level meters on the top of the screen in the second image—notice the top channel shows some content in the -9 to -6 range (yellow), whereas the bottom does not.

After a lot of fiddling, I discovered that my cable connecting to my computer’s line input was not of the best quality; removing and re-inserting it produced similar levels in both channels. Moral of the story: Use decent cables and check that all is good before you spend hours recording something that’s missing part of the signal in the right channel.

In the end, using the level meters as a guide, I set the recording level for peaks slightly below 0. And then it’s time to record!

Of course, the music is copyrighted and it’s not legal for me to share it with you, so to discover whether it sounds as good as I say it does, you’re just going to have to try it yourself.

Six Degrees Records is having its usual seasonal sale. This year it’s offering 25% off on everything, and it’s all available to purchase on that wonderful, Linux-friendly site Bandcamp. My two favorite picks are Nina Miranda’s "Freedom of Movement" and Vieux Farka Touré’s "Samba." And of course, it’s always wonderful to be able to shop right from your Linux (or X-BSD) desktop with tools you have at hand rather than installing a download manager with one of those other operating systems.