Jenkins X is an open source system that offers software developers continuous integration, automated testing, and continuous delivery, known as CI/CD, in Kubernetes. Jenkins X-managed projects get a complete CI/CD process with a Jenkins pipeline that builds and packages project code for deployment to Kubernetes and access to pipelines for promoting projects to staging and production environments.

Developers are already benefiting from running "classic" open source Jenkins and CloudBee's version of Jenkins on Kubernetes, thanks in part to the Jenkins Kubernetes plugin, which allows you to dynamically spin-up Kubernetes pods to run Jenkins build agents. Jenkins X adds what's missing from Jenkins: comprehensive support for continuous delivery and managing the promotion of projects to preview, staging, and production environments running in Kubernetes.

This article is a high-level explanation of how Jenkins X works; it assumes you have some knowledge of Kubernetes and classic Jenkins.

What you get with Jenkins X

If you're running on one of the major cloud providers (Amazon Elastic Container Service for Kubernetes, Google Kubernetes Engine, or Microsoft Azure Kubernetes Service), installing and deploying Jenkins X is easy. Download the Jenkins X command-line interface and run the jx create cluster command. You'll be prompted for the necessary information and, if you take the defaults, Jenkins X will create a starter-size Kubernetes cluster and install Jenkins X.

When you deploy Jenkins X, a number of services are put in motion to watch your Git repositories and respond by building, testing, and promoting your applications to staging, production, and other environments you define. Jenkins X also deploys a set of supporting services, including Jenkins, Docker Registry, Chart Museum, and Monocular to manage Helm charts, and Nexus, which serves as a Maven and npm repository.

The Jenkins X deployment also creates two Git repositories, one for your staging environment and one for production. These are in addition to the Git repositories you use to manage your project source code. Jenkins X uses these repositories to manage what is deployed to each environment, and promotions are done via Git pull requests (PRs)—this approach is known as GitOps. Each repository contains a Helm chart that specifies the applications to be deployed to the corresponding environment. Each repository also has a Jenkins pipeline to handle promotions.

To create a new project with Jenkins X, use the jx create quickstart command. If you don't specify any options, jx will prompt you to select a project name and a platform—which can be just about anything. SpringBoot, Go, Python, Node, ASP.NET, Rust, Angular, and React are all supported, and the list keeps growing. Once you have chosen your project name and platform, Jenkins X will:

Next, a webhook from Git will notify Jenkins X that a project changed, and it will run your project's Jenkins pipeline to build and push your Docker image and Helm charts.

Finally, the pipeline will submit a PR to the staging environment's Git repository with the changes needed to promote the application.

Once the PR is merged, the staging pipeline will run to apply those changes and do the promotion. A couple of minutes after creating your project, you'll have end-to-end CI/CD, and your project will be running in staging and available for use. 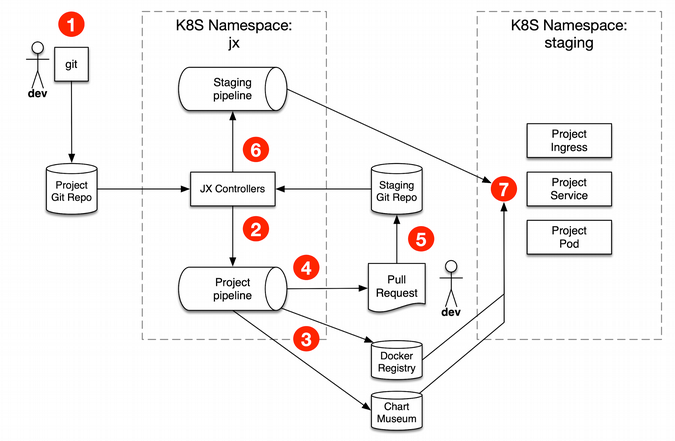 The figure above illustrates the repositories, registries, and pipelines and how they interact in a Jenkins X promotion to staging. Here are the steps:

When you import a project via jx import, Jenkins X adds the things needed for your project to be deployed to Kubernetes and participate in CI/CD. It will add a Jenkins pipeline, Helm charts, and a Skaffold configuration for deploying the application to Kubernetes. Jenkins X will create a Git repository and push the changes there. Next, a webhook from Git will notify Jenkins X that a project changed, and promotion to staging will happen as described above for new projects.

Promoting your project to production 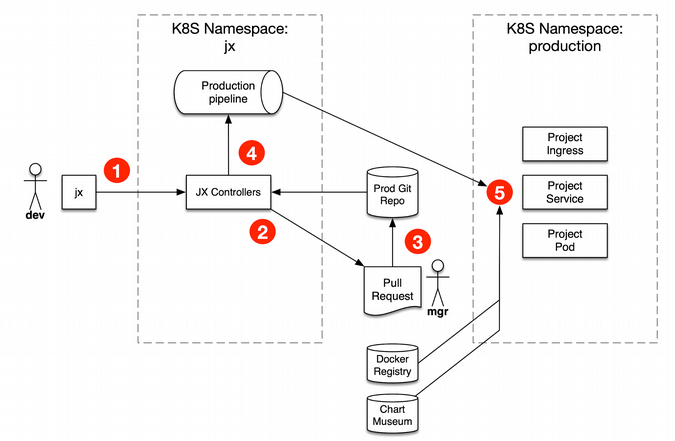 Developer promotes the project to production.

This figure illustrates the repositories, registries, and pipelines and how they interact in a Jenkins X promotion to production. Here are the steps:

Other features of Jenkins X

Other interesting and appealing features of Jenkins X include:

When you create a PR to add a new feature to your project, you can ask Jenkins X to create a preview environment so you can make your new feature available for preview and testing before the PR is merged.

Instead of running the Jenkins web application, which continually consumes CPU and memory resources, you can run Jenkins only when you need it. During the past year, the Jenkins community created a version of Jenkins that can run classic Jenkins pipelines via the command line with the configuration defined by code instead of HTML forms.

This capability is now available in Jenkins X. When you create a Jenkins X cluster, you can choose to use Serverless Jenkins. If you do, Jenkins X will deploy Prow to handle webhooks from GitHub and Knative to run Jenkins pipelines.

Jenkins X also has some limitations that should be considered:

What to read next
Tags
Kubernetes
Automation
CI/CD
Dave Johnson 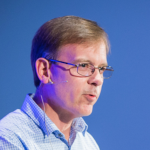