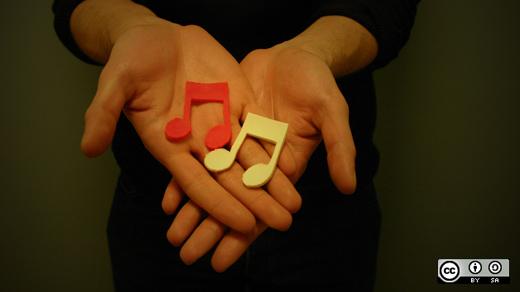 The Audiophile Linux site hasn’t shown a lot of activity since April 2017, but it does contain some updates and commentary from this year. Given its orientation and feature set, I decided to take it for a spin on my old Toshiba laptop.

The site provides a clear set of install instructions that require the use of the terminal. The first step after downloading the .iso is burning it to a USB stick. I used the GNOME Disks utility’s Restore Disk Image for this purpose. Once I had the USB set up and ready to go, I plugged it into the Toshiba and booted it. When the splash screen came up, I set the boot device to the USB stick and a minute or so later, the Arch Grub menu was displayed. I booted Linux from that menu, which put me in a root shell session, where I could carry out the install to the hard drive: 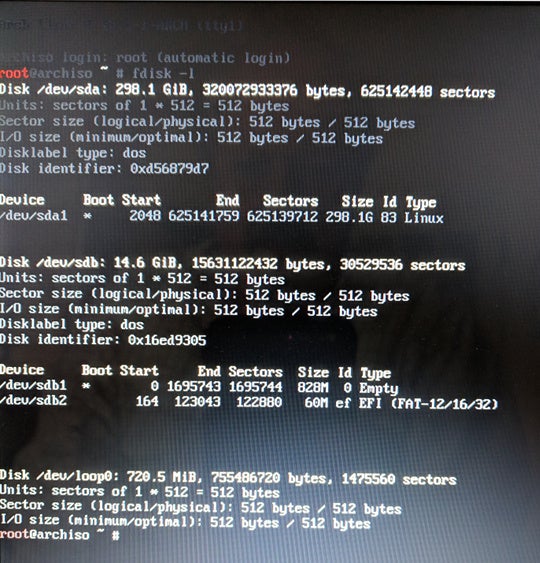 I was willing to sacrifice the 320-GB hard drive in the Toshiba for this test, so I was able to use the previous Linux partitioning (from the last experiment). I then proceeded as follows:

At that point, I was ready to boot the new operating system, so I did—and voilà, up came the system! 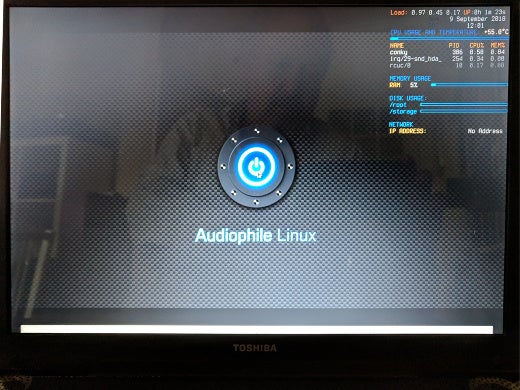 Once Audiophile Linux was up and running, I needed to finish the configuration and load some music. Grabbing the application menu by right-clicking on the screen background, I started X-terminal and entered the remaining configuration commands:

Again there is an error in upstream repo of Arch packages. Try to remove conflicting packages with “pacman -R ffmpeg2.8” and then do pacman -Suy later.

I chose to use pacman -Rc ffmpeg2.8, and then reran pacman -Suy. (As an aside, typing all these pacman commands made me realize how familiar I am with apt, and how much this whole process made me feel like I was trying to write an email in some language I don’t know using an online translator.)

To be clear, here was my sequence of operations:

Now back to the rest of the instructions:

I found the DAC Setup > List cards on the application menu, which showed the built-in Intel sound hardware plus my USB DAC that I had plugged in earlier. Then I selected DAC Setup > Edit mpd.conf and adjusted the output stanza of mpd.conf. I used scp to copy an album over from my main music server into ~/Music. And finally, I used the application menu DAC Setup > Restart mpd. And… nothing… the conky info on the screen indicated “MPD not responding”. So I scanned again through the comments at the bottom of the installation instructions and spotted this:

After every update of mpd, you have to do:
1. Become root
$su
2. run this commands
# cat /etc/apl-files/mpd.service > /usr/lib/systemd/system/mpd.service
# systemctl daemon-reload
# systemctl restart mpd.service

And this will be fixed. 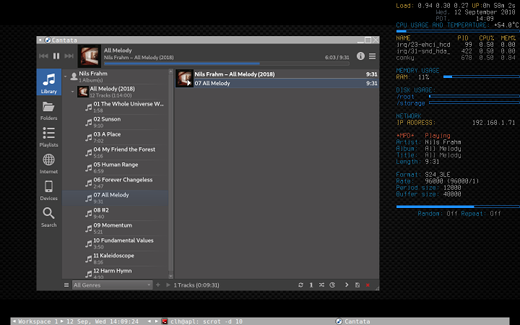 And it works! Right now I’m enjoying Nils Frahm’s "All Melody" from the album of the same name, playing over my Schiit Fulla 2 in glorious high-resolution sound. Time to copy in some more music so I can give it a better listen.

So… does it sound better than the same DAC connected to my regular work laptop and playing back through Guayadeque or GogglesMM? I’m going to see if I can detect a difference at some point, but right now all I can say is it sounds just wonderful; plus I like the Cantata / mpd combo a lot, and I really enjoy having the heads-up display in the upper right of the screen.

The other day I was reorganizing my work hard drive a bit and I decided to check to make sure that 1) all the music on it was also on the house music servers and 2) vice versa (gotta set up rsync for that purpose one day soon). In doing so, I found some music I hadn’t enjoyed for a while, which is kind of like buying a brand-new album, except it costs much less.

Six Degrees Records has long been one of my favorite purveyors of unusual music. A great example is the group Zuco 103's album Whaa!, whose CD version I purchased from Six Degrees’ online store some years ago. Check out this fun documentary about the group.

For a completely different experience, take a look at the Ragazze Quartet’s performance of Terry Riley’s "Four Four Three." I picked up ahigh-resolutionn version of this fascinating music from Channel Classics, which operates a Linux-friendly download store (no bloatware to install on your computer).

And finally, I was saddened to hear of the recent passing of Rachid Taha, whose wonderful blend of North African and French musical traditions, along with his frank confrontation of the challenges of being North African and living in Europe, has made some powerful—and fun—music. Check out Taha’s version of "Rock the Casbah." I have a few of his songs scattered around various compilation albums, and some time ago bought the CD version of Rachid Taha: The Definitive Collection, which I’ve been enjoying again recently.

I've been meaning to get around to finding a Linux that's well enough tuned to real-time audio tasks that it could reasonably take over DAW duties (currently that role is played by a Windows box running Sonar). Faster processors help a lot, but Microsoft put some serious work Into the effort to optimize/prioritizr DSP paths, and I just don't know the current state of the Linux world for that purpose ... Nor how effectively I might be able to bring over existing VSTs. This is currently my primary reason for continuing to run Windows on that box, but I'm just not sure that/which alternative paths are worth betting on.

I'm hoping that sometime soon we'll be past the "let a million flowers blooming" phase and have a clearer set of choices/configurations.

(Re rediscovering music: That's the single best thing about having the entire library loaded. Now I just need a player that understands that some tracks are intros/outros for adjacent material and doesn't shuffle them independently quite so often.)

My experience is that in Linux I have better control of setting everything up the best way for my computer and hardware than I had when running Windows. In Windows in short I could only affect latency with a two way switch, while in Linux I have several things to tweak to make it as good as possible. Sure, not everyone want to dig into such detail and perhaps not everyone actually need to. In my view Linux is better in handling audio once set up properly. I left my VST's behind when going all in on Linux. There are good native alternatives that suits my need so why bother with porting that, was my thinking.

Thanks for the comments, Loxmyth.

As to what may (or may not) have been done to improve processing in a closed source operating system, that's a bit outside the subject matter at hand.

As to choices for a DAW, this is outside my comfort zone, but as far as I know, the open source alternatives are:
- Ubuntu Studio
- AV Linux
- KX Studio

As to tools, I like this link https://alternativeto.net/software/fl-studio/?platform=linux but again it's outside my experience so please take it with a grain of salt!

Thanks for the article, I will test cantanta, after reading this article but I did not understand the advantage of using MPD - I searched the web and still didn't - Thanks in advance if you write another article or expand this one about this issue.

I use Manjaro with normal and rt kernel installed, and I had no problem installing cantanta, Wrote that I do not understand why having so many spins Manjaro still does not have a Studio one, with the KX repository and a Audophile one like this arch one.

Thanks for your comments, Miguel.

From my perspective at least, there are two main advantages for using MPD.

First, MPD is really a music server, implying you must use a client to make it play (like Cantata, for example). This architecture makes it straightforward to build a very lightweight music server system, like for example a Raspberry Pi (or in my case a Cubox i4) that runs headless and sits somewhere in your audio rack, connected to your receiver or a standalone DAC that is connected into your system. Then you control this from e.g. your Android phone / tablet or laptop or chromebook or something else by running the client software there.

Second, MPD is readily configured to talk directly to a DAC (that's a digital to analog converter) using ALSA, thus bypassing all mixers, resamplers, etc to get an untouched bit stream out to your music system. In contrast, many music players do not provide this kind of control, leaving configuration up to gstreamer and/or PulseAudio, which in turn can be much more difficult to configure to pass the digital audio through untouched.

You might want to read a few earlier articles I've written here that touch on this subject:

I don't understand why you would benefit whatsoever with a Real Time kernel for playback? Sure, live performance and some overdub recordings, but for playback..?

Thanks for this comment, Jimmy, as well as the one above.

It seems that there are a number of audiophiles out there who feel that a real time kernel will deliver a more reliable bit stream (because of lower latencies) to an external DAC, perhaps reducing jitter or somehow otherwise contributing to better sound.

But others (besides you) don't feel it's necessary

Thanks for wading into the APLinux install quagmire. Being new to all things Linux your article is a big help, since the APL site caters to a much more seasoned crowd.
Over the last several months the ever-so-user-friendly Daphile has been my fallback whenever I break APL. Both sound wonderful, but I have a preference for APL based largely on appearance (Cantata looks and feels great), and because I think APL sounds a bit better with my little desktop rig (that includes a Partaker fanless mini computer).

Thanks for your kind comments, Ronald Ellis. My Audiophile Linux install hasn't "gone into production" in my house yet, but it may at some point; right now I rely on a couple of small headless and fanless servers using MPD and I run the client elsewhere. Still, I really like what I see in Audiophile Linux, and I hope its developer manages to remain engaged with the project.