Prometheus' prowess as a monitoring system and its ability to achieve high-scalability make it a strong choice for monitoring applications and servers. 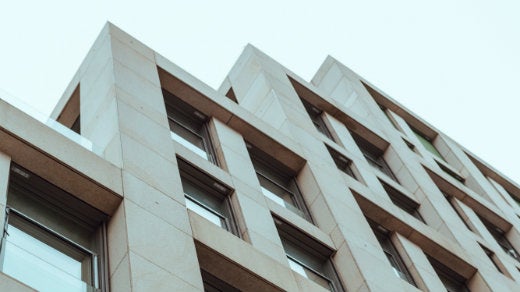 Prometheus is an increasingly popular—for good reason—open source tool that provides monitoring and alerting for applications and servers. Prometheus' great strength is in monitoring server-side metrics, which it stores as time-series data. While Prometheus doesn't lend itself to application performance management, active control, or user experience monitoring (although a GitHub extension does make user browser metrics available to Prometheus), its prowess as a monitoring system and ability to achieve high-scalability through a federation of servers make Prometheus a strong choice for a wide variety of use cases.

In this article, we'll take a closer look at Prometheus' architecture and functionality and then examine a detailed instance of the tool in action.

Prometheus consists of the Prometheus server (handling service discovery, metrics retrieval and storage, and time-series data analysis through the PromQL query language), a data model for metrics, a graphing GUI, and native support for Grafana. There is also an optional alert manager that allows users to define alerts via the query language and an optional push gateway for short-term application monitoring. These components are situated as shown in the following diagram. 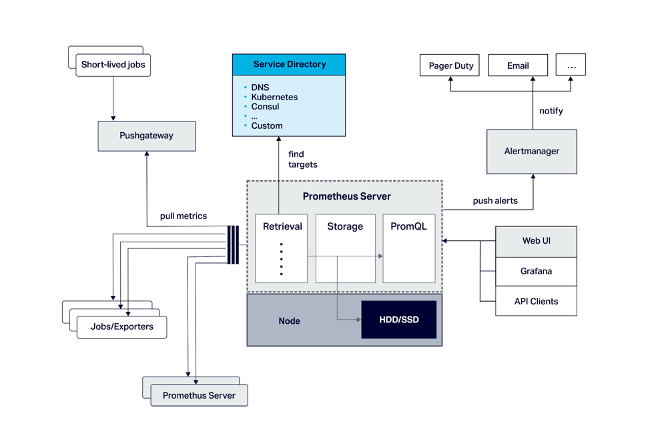 Prometheus can automatically capture standard metrics by using agents to execute general-purpose code in the application environment. It can also capture custom metrics through instrumentation, placing custom code within the source code of the monitored application. Prometheus officially supports client libraries for Go, Python, Ruby, and Java/Scala and also enables users to write their own libraries. Additionally, many unofficial libraries for other languages are available.

Developers can also utilize third-party exporters to automatically activate instrumentation for many popular software solutions they might be using. For example, users of JVM-based applications like open source Apache Kafka and Apache Cassandra can easily collect metrics by leveraging the existing JMX exporter. In other cases, an exporter won't be needed because the application will expose metrics that are already in the Prometheus format. Those on Cassandra might also find Instaclustr's freely available Cassandra Exporter for Prometheus to be helpful, as it integrates Cassandra metrics from a self-managed cluster into Prometheus application monitoring.

Also important: Developers can leverage an available node exporter to monitor kernel metrics and host hardware. Prometheus offers a Java client as well, with a number of features that can be registered either piecemeal or at once through a single DefaultExports.initialize(); command—including memory pools, garbage collection, JMX, classloading, and thread counts.

Prometheus time-series data metrics each include a string name, which follows a naming convention to include the name of the monitored data subject, the logical type, and the units of measure used. Each metric includes streams of 64-bit float value that are timestamped down to the millisecond, and a set of key:value pairs labeling the dimensions it measures. Prometheus automatically adds Job and Instance labels to each metric to keep track of the configured job name of the data target and the <host>:<port> piece of the scraped target URL, respectively.

Before moving into the example, download and begin using open source Prometheus by following this getting started guide.

To demonstrate how to put Prometheus into action and perform application monitoring at a high scale, let's take a look at a recent experimental Anomalia Machina project we completed at Instaclustr. This project—just a test case, not a commercially available solution—leverages Kafka and Cassandra in an application deployed by Kubernetes, which performs anomaly detection on streaming data. (Such detection is critical to use cases including IoT applications and digital ad fraud, among other areas.) The experimental application relies heavily on Prometheus to collect application metrics across distributed instances and make them readily available to view.

This diagram displays the experiment's architecture: 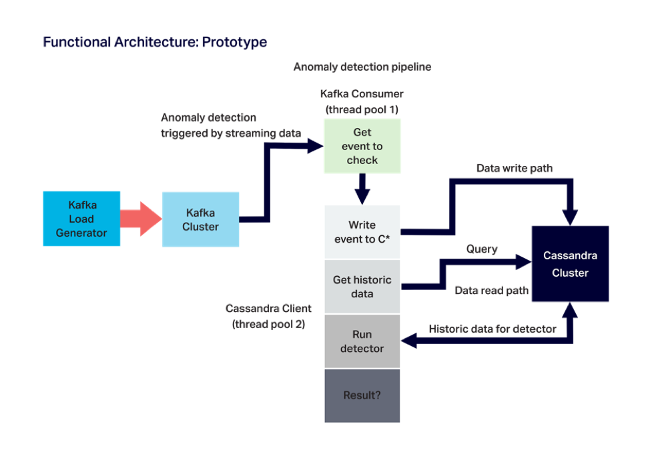 Our goals in utilizing Prometheus included monitoring the application's more generic metrics, such as throughput, as well as the response times delivered by the Kafka load generator (the Kafka producer), the Kafka consumer, and the Cassandra client tasked with detecting any anomalies in the data. Prometheus monitors the system's hardware metrics as well, such as the CPU for each AWS EC2 instance running the application. The project also counts on Prometheus to monitor application-specific metrics such as the total number of rows each Cassandra read returns and, crucially, the number of anomalies it detects. All of this monitoring is centralized for simplicity.

In practice, this means forming a test pipeline with producer, consumer, and detector methods, as well as the following three metrics:

The code behind these measurements increments counter metrics using the inc() method and sets the time value of the gauge metric with the setToTime() method. This is demonstrated in the following annotated example code:

Prometheus collects metrics by polling ("scraping") instrumented code (unlike some other monitoring solutions that receive metrics via push methods). The code example above creates a required HTTP server on port 1234 so that Prometheus can scrape metrics as needed.

The code example below tells Prometheus where it should look to scrape metrics. This code can simply be added to the configuration file (default: Prometheus.yml) for basic deployments and tests.

Note the job named "node" that uses port 9100 in this configuration file; this job offers node metrics and requires running the Prometheus node exporter on the same server where the application is running. Polling for metrics should be done with care: doing it too often can overload applications, too infrequently can result in lag. Where application metrics can't be polled, Prometheus also offers a push gateway.

Our experiment initially used expressions, and later Grafana, to visualize data and overcome Prometheus' lack of default dashboards. Using the Prometheus interface (or http://localhost:9090/metrics), select metrics by name and then enter them in the expression box for execution. (Note that it's common to experience error messages at this stage, so don't be discouraged if you encounter a few issues.) With correctly functioning expressions, results will be available for display in tables or graphs as appropriate.

Using the irate or rate function on a counter metric will produce a useful rate graph:

Here is a similar graph of a gauge metric:

To enable Grafana, install it, navigate to http://localhost:3000/, create a Prometheus data source, and add a Prometheus graph using an expression. A note here: An empty graph often points to a time range issue, which can usually be solved by using the "Last 5 minutes" setting.

Creating this experimental application offered an excellent opportunity to build our knowledge of what Prometheus is capable of and resulted in a high-scale experimental production application that can monitor 19 billion real-time data events for anomalies each day. By following this guide and our example, hopefully, more developers can successfully put Prometheus into practice.

How to use Ansible to set up system monitoring with Prometheus

In the third part of this Ansible how-to series, learn how to automate system monitoring.

Tracking the weather with Python and Prometheus

Create a custom Prometheus integration to keep track of the biggest cloud provider of all: Mother Earth. 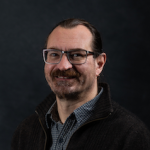 Paul Brebner is Chief Technology Evangelist at Instaclustr, which provides a managed service platform of open source technologies such as Apache Cassandra, Apache Spark, Elasticsearch and Apache Kafka. He is based in Canberra, Australia.
More about me