What GNOME 2 fans love about the Mate Linux desktop | Opensource.com

What GNOME 2 fans love about the Mate Linux desktop

This article is part of a special series of 24 days of Linux desktops. If you remember GNOME 2 fondly, the Mate Linux desktop will fulfill your need for nostalgia.

Stop me if you've heard this one before: When GNOME 3 was first released, many GNOME users were not ready to give up GNOME 2. The Mate (named after the yerba mate plant) project began as an effort to continue the GNOME 2 desktop, at first using GTK 2 (the toolkit GNOME 2 was based upon) and later incorporating GTK 3. The desktop became wildly popular, due in no small part to Linux Mint's prompt adoption of it, and since then, it has become commonly available on Fedora, Ubuntu, Slackware, Arch, and many other Linux distributions. Today, Mate continues to deliver a traditional desktop environment that looks and feels exactly like GNOME 2 did, using the GTK 3 toolkit.

More Linux resources
You may find Mate included in the software repository of your Linux distribution, or you can download and install a distribution that ships Mate as its default desktop. Before you do, though, be aware that it is meant to provide a full desktop experience, so many Mate apps are installed along with the desktop. If you're running a different desktop, you may find yourself with redundant applications (two PDF readers, two media players, two file managers, and so on). If you just want to try the Mate desktop, you can install a Mate-based distribution in a virtual machine, such as GNOME Boxes.

The Mate project doesn't just evoke GNOME 2; it is GNOME 2. If you were a fan of the Linux desktop back in the mid-'00s, at the very least, you'll find Mate nostalgic. I was not a fan of GNOME 2 and tended to use KDE instead, but there's one place I can't imagine without GNOME 2: OpenSolaris. The OpenSolaris project didn't last long, coming to prominence when Ian Murdock joined Sun Microsystems just before it was subsumed by Oracle, but I was a low-level Solaris admin at the time and used OpenSolaris to teach myself more about that flavor of Unix. It was the only platform where I used GNOME 2 (because I didn't know how to change the desktop at first and then just got used to it), and today the OpenIndiana project, a community continuation of OpenSolaris, uses GNOME 2 by way of the Mate desktop. 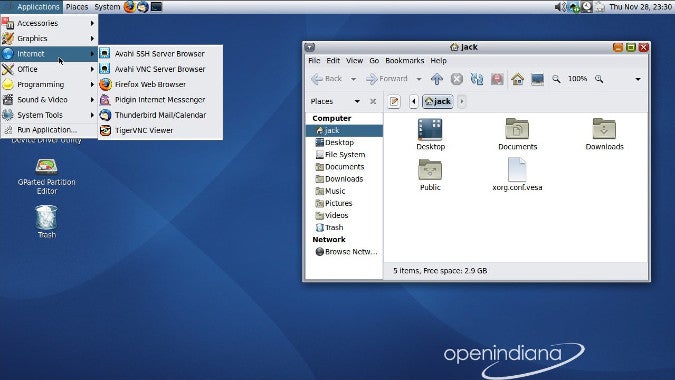 Mate's layout consists of three menus in the top-left corner: Applications, Places, and System. The Applications menu provides quick access to all application launchers installed on the system. The Places menu provides quick access to common locations, such as your home directory, a network folder, and so on. The System menu contains global options, such as shutdown and suspend. In the upper-right corner is a system tray, and there's a taskbar and a virtual desktop pager at the bottom of the screen.

It's a slightly peculiar configuration, as far as desktop design goes. It borrows equal parts from earlier Linux desktops, the Mac Finder, and Windows, but creates a unique configuration that's intuitive and somehow familiar. Mate intentionally resists deviation from this model, and that's exactly the way its users prefer it.

Mate is one of the most direct examples of how open source empowers developers to fight against a project's end of life. On paper, GNOME 2 was superseded by GNOME 3, yet it lives on because one developer forked the code and carried on. Momentum grew, more developers joined, and the desktop that users love is healthier than ever. Not all software gets a second chance at life, but the option is always there with open source, and it's always absent otherwise.

Using and supporting open source means supporting user and developer freedom. And the Mate desktop is a powerful example of what happens when it works.

This article is part of a special series of 24 days of Linux desktops. The Budgie Linux desktop is a great example of how diversity in open source creates more choice for each user.
Seth Kenlon (Red Hat)

This article is part of a special series of 24 days of Linux desktops. Enlightenment offers a smooth, appealing, and modern Linux desktop experience, even on older hardware.
Seth Kenlon (Red Hat)

I didn't realize Mate was up-to-date under the hood, or I'd have skipped CInnamon... I'm either on that or XFCE, but I'll have to give it a whirl. GLad I stopped in. Thanks!

I'm glad you stopped by, too. Thanks for reading!