How to replace a hard drive on Linux | Opensource.com

How to replace a hard drive on Linux

I built my current desktop about three years ago and installed a solid-state drive (SSD). Later, I needed more storage space, so I installed a second drive—an older spindle and platter hard disk drive (HDD) that happened to be lying around. Recently, I decided to replace this HDD with an SSD.

This article walks through the steps for replacing the drive, including some commands used for identifying and configuring a drive and editing the configuration file Linux uses.

To begin, use the parted command with the argument -l to list the physical drives in your system.

You can see that my system has two drives: sda, which is an SSD, and sdb, which is an HDD. The Number column lists the partitions that exist on each drive. Each partition is referred to by number; for example, the full name of the first partition on sda is /dev/sda1, the second is /dev/sda2.

Now that you know the drives and their partitions, use the findmnt command to view details about each partition and where they are mounted in the filesystem.

The fstab option instructs findmnt to search according to the /etc/fstab file, and the evaluate option converts lengthy universally unique identifiers (UUIDs) to real device names.

In the output of findmnt, SOURCE is the partition that you can reference back to the output of the parted command from before. TARGET is the path within the filesystem where each is mounted; this is also known as the mount point.

In the output above, the swap partition shows none for its target. Verify details about your swap space using the cat command.

The fstab file name is short for "filesystems table." The columns are numbered from left to right:

Now that you have an understanding of the drives in your system and how they are mounted, you can begin the process of replacing the HDD.

More Linux resources
A good plan is to install the new SSD, copy the files on the HDD to the SSD, and then remove the HDD. You want ultimately to mount the SSD at the same point as the HDD, so any applications that rely on this path won't be broken.

First, shut down the computer and unplug the power supply cable to avoid the risk of shock damage to either the computer or yourself. Next, temporarily install the SSD and connect it to a power cable. 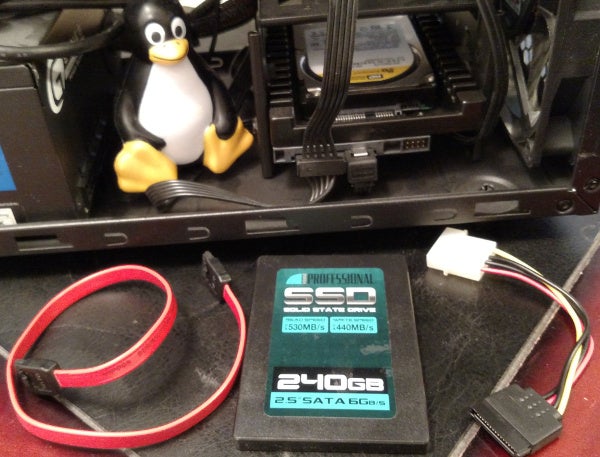 Then, connect the data cable between the new drive and an open SATA connector on the motherboard. After everything is connected securely, plug the system power in and turn on the computer.

Next, verify that the system recognizes the new drive in your computer's BIOS or Unified Extensible Firmware Interface (UEFI). The key or keystroke combination to enter the system BIOS or UEFI varies by computer manufacturer. Usually, modern computers will automatically detect drives and other devices that are attached to the system, so there is probably nothing that needs to be changed. That was my case; my system sees the new drive as SATA SSD.

After verifying that all drives are detected and displayed by the system, reboot and let Linux load. Then, make sure that Linux recognizes the drive by repeating the parted command. The command parted -l shows that I have three drives installed: sda, sdb, and sdc. Here's the output for my new sdc drive:

This output lists the partition table as msdos and indicates there are two existing partitions; this is because I am using an SSD that was previously used in another system. This will all change once the drive is reformatted for its new life.

After confirming that Linux identifies the new SSD, use the parted command again—but this time to reconfigure the drive. In my case, I changed the partition table to GPT, which is newer. I also created a new partition for general storage using the XFS filesystem. You won't need to delete the existing partitions first because they will automatically be deleted when the new partition table, also called label, is changed and saved.

Use the mklabel command to change the partition table or label to gpt. You will be warned that this action will destroy all existing data on the disk. Answer yes.

You can verify changes to the drive configuration using the print command. You'll also notice that all partitions are gone.

You can create new partitions using the mkpart command. I created just one partition since I plan to use the entire drive for extra storage space.

The print free command is also useful for displaying the free space on a drive. Because I don't have any partitions defined, the entire 240GB is available.

I'll name the partition storage and set the filesystem type to xfs. Since I have just one partition, I specify the start and end of the partition to use the entire available free space using percentages. This can be done with a one-line command.

Then, confirm with the print command.

When you quit parted, you will be informed that the /etc/fstab file may need to be updated.

Next, format the new Linux partition with the xfs filesystem using mkfs.xfs.

The new drive is formatted completely. As I mentioned earlier, it's currently standard to refer to a partition with its UUID rather than the physical device path. Therefore, determine the UUID of the new partition with blkid.

The new drive is formatted and ready to be mounted into the system. But the process of replacing another drive with this one isn't quite that simple. First, both drives must be mounted simultaneously to copy files from the old drive to the new one.

To do this, mount the new drive on a temporary mount point, copy the files, and then unmount both drives. Why? So you can mount the new drive at the same mount point where the old drive was mounted in order to preserve the path. In case there are applications with that path configured, it's just simpler this way.

Use diff to verify the copy's success.

Now that the new drive contains all of the old files, remount it in place of the old drive. First, unmount both drives.

Since the old drive will no longer be used as a swap device, disable it with the swapoff command.

If you repeat the cat /proc/swaps command, it will no longer list this partition.

Go back to the /etc/fstab file; there are a few changes that you need to make. I advise making a backup of the file before editing it.

In the line for the /raptor mount point, replace the UUID with that of the new drive; replace the filesystem, ext4, with xfs; and add discard to the options. It should appear like this:

Disable swap permanently by editing the /etc/fstab file and commenting or deleting the swap line.

Swap space can be mounted on another drive or partition if it is still needed. In this case, rather than removing this line, just replace the UUID the same way you did when setting up the new drive.

After saving the fstab file, run mount to re-mount based on the changes.

Finally, shut down the computer and remove the HDD that will no longer be used. Then power up and check that the system has booted correctly and that all drives are mounted as expected. In addition to the additional storage space, I also notice a performance gain and noise reduction.

Install Linux on a used laptop

Need a cheap laptop that runs as well as any? How about one that runs Linux? See this great option...
Phil Shapiro