Recently, I bought and started using a Tuxedo Book BC1507, a Linux laptop computer. Ten years ago, if someone had told me that, by the end of the decade, I could buy top-quality, "penguin-ready" laptops from companies such as System76, Slimbook, and Tuxedo, I probably would have laughed. Well, now I'm laughing, but with joy!

Tuxedo Computers is a German company that builds Linux-ready laptops. In fact, if you want a different operating system, it costs more.

Buying the computer was incredibly easy. Tuxedo offers many payment methods: not only credit cards but also PayPal and even bank transfers. Just fill out the bank transfer form on Tuxedo's web page, and the company will send you the bank coordinates.

Tuxedo builds every computer on demand, and picking exactly what you want is as easy as selecting the basic model and exploring the drop-down menus to select different components. There is a lot of information on the page to guide you in the purchase.

If you pick a different Linux distribution from the recommended one, Tuxedo does a "net install," so have a network cable ready to finish the installation, or you can burn your preferred image onto a USB key. I used a DVD with the openSUSE Leap 15.1 installer through an external DVD reader instead, but you get the idea.

The model I chose accepts up to two disks: one SSD and the other either an SSD or a conventional hard drive. As I was already over budget, I decided to pick a conventional 1TB disk and increase the RAM to 16GB. The processor is an 8th Generation i5 with four cores. I selected a back-lit Spanish keyboard, a 1920×1080/96dpi screen, and an SD card reader—all in all, a great system.

If you're fine with the default English or German keyboard, you can even ask for a penguin icon on the Meta key! I needed a Spanish keyboard, which doesn't offer this option.

Receiving and using it

The perfectly packaged computer arrived in total safety to my door just six working days after the payment was registered. After unpacking the computer and unlocking the battery, I was ready to roll. 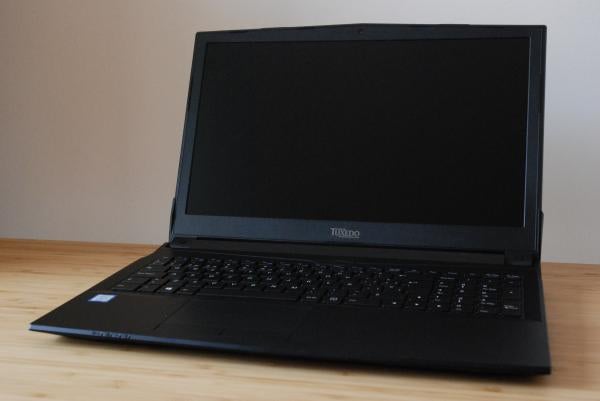 The new toy on top of my (physical) desktop.

The computer's design is really nice and feels solid. Even though the chassis on this model is not aluminum, it stays cool. The fan is really quiet, and the airflow goes to the back edge, not to the sides, as in many other laptops. The battery provides several hours of autonomy from an electrical outlet. An option in the BIOS called FlexiCharger stops charging the battery after it reaches a certain percentage, so you don't need to remove the battery when you work for a long time while plugged in.

The keyboard is really comfortable and surprisingly quiet. Even the touchpad keys are quiet! Also, you can easily adjust the light intensity on the back-lit keyboard.

Finally, it's easy to access every component in the laptop so the computer can be updated or repaired without problems. Tuxedo even sends spare screws!

After a month of heavy use, I'm really happy with the system. I got exactly what I asked for, and everything works perfectly.

Because they are usually high-end systems, Linux-included computers tend to be on the expensive side of the spectrum. If you compare the price of a Tuxedo or Slimbook computer with something with similar specifications from a more established brand, the prices are not that different. If you are after a powerful system to use with free software, don't hesitate to support these companies: What they offer is worth the price.

Let's us know in the comments about your experience with Tuxedo and other "penguin-friendly" companies.

This article is based on "My new 'penguin ready' laptop: Tuxedo-Book-BC1507," published on Ricardo's blog, From Mind to Type.

What to read next
Tags
Linux
Ricardo Berlasso 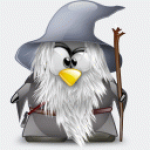