Happy birthday to the Linux kernel: What's your favorite release?

It's been 28 years since the first Linux kernel was conceived. There have been several releases since 1991, so what's your favorite? Take our poll. 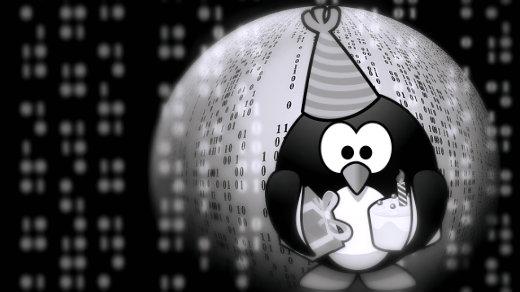 What's your favorite release of the Linux kernel?

Let's take a trip back to August 1991, when history was in the making. The tech world faced many pivotal moments that continue to impact us today. An intriguing project called the World Wide Web was announced by Tim Berners-Lee and the first website was launched. Super Nintendo was released in the United States and a new chapter of gaming began for kids of all ages. At the University of Helsinki, a student named Linus Torvalds asked his peers for feedback on a new free operating system he had been developing as a hobby. It was then that the Linux kernel was born.

Today, we can browse more than 1.5 billion websites, play with five additional Nintendo game consoles on our televisions, and maintain six longterm Linux kernels. Here's what some of our writers had to say about their favorite Linux kernel release.

"The one that introduced modules (was it 1.2?). It was a big step towards a successful Linux future." —Milan Zamazal

"2.6.9 as it was the version at the time when I joined Red Hat in 2006 (in RHEL4). But also a slightly bigger love for 2.6.18 (RHEL5) as it was the one which was deployed at massive scale / for mission critical workloads at all our largest customers (Telco, FSI). It also brought one of our biggest techno change with virtualization (Xen then KVM)." —Herve Lemaitre

"The new kernel that shipped with Fedora 30 fixed a suspend issue with my Thinkpad Yoga laptop; suspend now works flawlessly. I'm a jerk and just lived with this and never filed a bug report, so I'm especially appreciative of the work I know must have gone into fixing this." —Máirín Duffy

"I will always have a special place in my heart for the 2.6.16 release. It was the first kernel that I was responsible for converting to run on the hertz neverlost gps system. I lead the effort to build the kernel and root filesystem for that device, it was truly a magical time for me. We updated the kernel several times after that initial release, but I think I'll have to go with the original version. Sadly, I don't really have any technical reasons for this love, it's purely sentimental =)" —Michael McCune

"My favorite Linux kernel release was the 2.4.0 series, it integrated support for USB, the LVM, and ext3. Ext3 being the first mainline Linux filesystem to have journaling support and available with the 2.4.15 kernel. My very first kernel release was 2.2.13." —Sean Nelson

"Maybe it's 2.2.14, because it's the version that ran on the first Linux I ever installed (Mandrake Linux 7.0, in 2000 IIRC). It was also the first version I ever had to recompile to get my video card, or my modem (can't recall) working." —Germán Pulido

"I think the latest one! But I had for a time used the realtime kernel extensions for audio production." —Mario Torre

Of the more than 52 versions of the Linux kernel, which one is your favorite? Take our poll and tell us why in the comments.

Want to know what the actual (not buzzword) innovations are when it comes to the Linux kernel? Read on.
Seth Kenlon (Red Hat)

Training college students to contribute to the Linux kernel

Following my recent post on the initiatives now in place to rebalance the demographics of the Linux...
Luis Ibanez

How this team works to prevent bugs from being merged into the Linux kernel.
Major Hayden (Red Hat)

Lauren Pritchett - Lauren is the managing editor for Opensource.com. She loves how open source technology and principles help solve all types of problems, particularly those involving education, climate change, and citizen engagement. When she's not organizing the editorial calendar or digging into the data, she can be found going on adventures with her family and German shepherd rescue dog, Quailford.
More about me

For me it is 3.16, because that was the release where I first came in touch and fall in love with the beauty of Linux during my apprenticeship. :)

0.99pl14, because I wrote my first "real" linux application with that one.. a content distribution server for a videotext system.. and it worked on the first try! Everyone was amazed including myself a little bit... Bit I pretended I never had any doubt ;)

I remember my first contact with Linux was a Slackware distribution, it was a kernel before 2.6.0, maybe a kernel version 1.0. It was a great experience. At that moment I was evaluating other Unix-like OS for Intel processors like SCO, Solaris and Linux. But Linux was very promising and a winner for the long term.

2.6.38, which included the Patch of Wonder. It changed everything for me as a multimedia content producer.

Unfortunately mine is very new, 5.1 rc1 or 2 -it was the first time I compiled one, and went through .config (through xconfig, I now use nconfig).

I had compiled for Android multiple times, but 5.1 stick because I configured it

Definitely kernel 2.6.23, as it has my name in it :)
(I contributed a very, very, very small patch to make my phone work via USB).

My second favorite is 2.4.1, as it included reiserfs, which I used for years.