It's 2020 and time to learn about Java Streams.

In this article, I will explain how to not write loops anymore.

What? Whaddaya mean, no more loops?

Yep, that's my 2020 resolution—no more loops in Java. Understand that it's not that loops have failed me, nor have they led me astray (well, at least, I can argue that point). Really, it is that I, a Java programmer of modest abilities since 1997 or so, must finally learn about all this new Streams stuff, saying "what" I want to do and not "how" I want to do it, maybe being able to parallelize some of my computations, and all that other good stuff.

I'm guessing that there are other Java programmers out there who also have been programming in Java for a decent amount of time and are in the same boat. Therefore, I'm offering my experiences as a guide to "how to not write loops in Java anymore."

Find a problem worth solving

If you're like me, then the first show-stopper you run into is "right, cool stuff, but what am I solving for, and how do I apply this?" I realized that I can spot the perfect opportunity camouflaged as Something I've Done Before.

In my case, it's sampling land cover within a specific area and coming up with an estimate and a confidence interval around that estimate for the land cover across the whole area. The specific problem involves deciding whether an area is "forested" or not, given a specific legal definition: if at least 10% of the soil is covered over by tree crowns, then the area is considered to be forested; otherwise, it's something else. 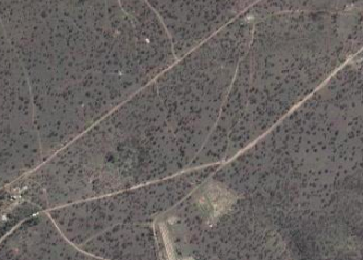 It's a pretty esoteric example of a recurring problem; I'll grant you. But there it is. For the ecologists and foresters out there who are accustomed to cool temperate or tropical forests, 10% might sound kind of low, but in the case of dry areas with low-growing shrubs and trees, that's a reasonable number.

So the basic idea is: use images to stratify the area (i.e., areas completely devoid of trees, areas of predominantly small trees spaced quite far apart, areas of predominantly small trees spaced closer together, areas of somewhat larger trees), locate some samples in those strata, send the crew out to measure the samples, analyze the results, and calculate the proportion of soil covered by tree crowns across the area. Simple, right? 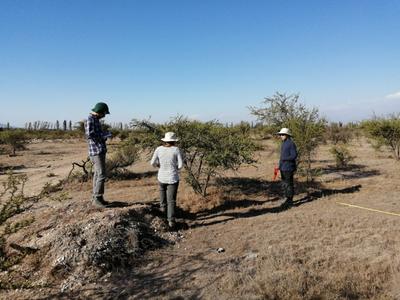 In the current project, the samples are rectangular areas 20 meters wide by 25 meters long, so 500 square meters each. On each patch, the field crew measured each tree: its species, its height, the maximum and minimum width of its crown, and the diameter of its trunk at trunk height (nominally 30cm above the ground). This information was collected, entered into a spreadsheet, and exported to a bar separated value (BSV) file for me to analyze. It looks like this:

The first column is the stratum number (where 1 is "predominantly small trees spaced quite far apart," 2 is "predominantly small trees spaced closer together," and 3 is "somewhat larger trees"; we didn't sample the areas "completely devoid of trees"). The second column is the sample number (there are 73 samples altogether, located in the three strata in proportion to the area of each stratum). The third column is the tree number within the sample. The fourth is the two-letter species code, the fifth the trunk diameter (in this case, 10cm above ground or exposed roots), the sixth the smallest distance across the crown, the seventh the largest distance, and the eighth the height of the tree.

For the purposes of this exercise, I'm only concerned with the total amount of ground covered by the tree crowns—not the species, nor the height, nor the diameter of the trunk.

In addition to the measurement information above, I also have the areas of the three strata, also in a BSV:

In keeping with one of the main design goals of Java Streams, here is "what" I want to do:

Generally speaking, the way to define "what" with Java Streams is by creating a stream processing pipeline of function calls that pass over the data. So, yes, there is actually a bit of "how" that ends up creeping in… in fact, quite a bit of "how." But, it needs a very different knowledge base than the good, old fashioned loop.

I'll go through each of these steps in detail.

The first job is to convert the stratum areas BSV file to a lookup table:

I'll take this a line or two at a time, where the numbers in comments following the lines above—e.g., // (3)— correspond to the numbers below:

Again, a line or two or so at a time:

Accumulate the sample totals into the stratum means and standard errors

So the first thing to do is create a class, StratumAccumulator, to handle the accumulation and provide the calculation of the interesting results. This class implements java.util.function.DoubleConsumer, which can be passed to collect() to handle accumulation:

Once I have this accumulator, I can use it to accumulate the sample values pertaining to each stratum:

Whew! After all of that, printing out the stratum figures is pretty straightforward:

In the above, once again, I use entrySet().stream() to transform the stratumValues Map to a stream, and then apply the forEach() method to the stream. ForEach() is pretty much what it sounds like—a loop! But the business of finding the head of the stream, finding the next element, and checking to see if hits the end is all handled by Java Streams. So, I just get to say what I want to do for each record, which is basically to print it out.

Accumulate the stratum means and standard errors into the total

Once again, the task becomes more complex, so I create a class, TotalAccumulator, to handle the accumulation and provide the calculation of the interesting results. This class implements java.util.function.Consumer<T>, which can be passed to collect() to handle accumulation:

I'm not going to go into much detail on this, since it's structurally pretty similar to StratumAccumulator. Of main interest:

As for actually carrying out the work, it's easy-peasy:

Same old stuff as before:

Getting the interesting bits out of the TotalAccumulator instance is also pretty straightforward:

Similar to the StratumAccumulator, I just call the relevant getters to pick out the number of samples nT and the standard error se66T. I calculate the T value tT (using "n – 3" here since there are three strata), and then I print the result, which looks like this:

Wow, that looks like a bit of a marathon. It feels like it, too. As is often the case, there is a great deal of information about how to use Java Streams, all illustrated with toy examples, which kind of help, but not really. I found that getting this to work with a real-world (albeit very simple) example was difficult.

I don't feel like any kind of master of Java Streams at this point, but I do feel I have a pretty solid understanding of collect(), which is deeply important, along with various methods to reformat data structures into streams and to reformat stream elements themselves. So yeah, more to learn!

Speaking of collect(), in the examples I presented above, we can see moving from a very simple use of this fundamental method - using the Collectors.summingDouble() accumulation method - through defining an accumulator class that extends one of the pre-defined interfaces - in this case DoubleConsumer - to defining a full-blown accumulator of our own, used to accumulate the intermediate stratum class. I was tempted - sort of - to work backward and implement fully custom accumulators for the stratum and sample accumulators, but the point of this exercise was to learn more about Java Streams, not to become an expert in one single part of it all.

What's your experience with Java Streams? Done anything big and complicated yet? Please share it in the comments.