In the previous articles in this series, I explained why tackling coding problems all at once, as if they were hordes of zombies, is a mistake. I'm using a helpful acronym explaining why it's better to approach problems incrementally. ZOMBIES stands for:

In the first four articles in this series, I demonstrated the first five ZOMBIES principles. The first article implemented Zero, which provides the simplest possible path through your code. The second article performed tests with One and Many samples, the third article looked at Boundaries and Interfaces, and the fourth examined Exceptional behavior. In this article, I'll take a look at the final letter in the acronym: S, which stands for "simple scenarios, simple solutions."

There you have it: ZOMBIES help you deliver sturdy, elegant solutions by adhering to simplicity.

It might seem you're done here, and a less conscientious engineer would very likely declare victory. But enlightened engineers always probe a bit deeper.

One exercise I always recommend is mutation testing. Before you wrap up this exercise and go on to fight new battles, it is wise to give your solution a good shakeout with mutation testing. And besides, you have to admit that mutation fits well in a battle against zombies.

Use the open source Stryker.NET to run mutation tests. 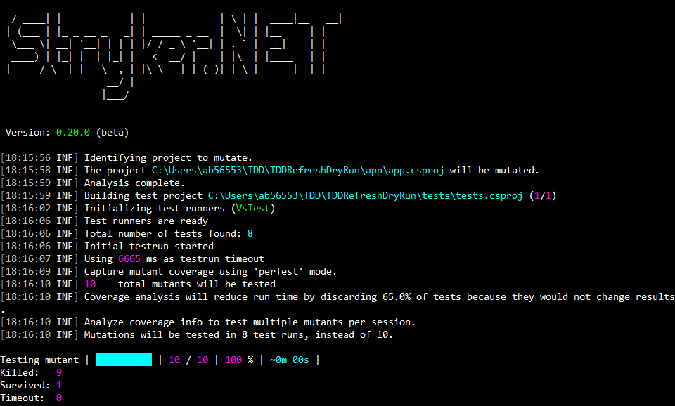 What does this mean? Just when you thought you had a rock-solid, sturdy solution, Stryker.NET is telling you that not everything is rosy in your neck of the woods.

Take a look at the pesky mutant who survived:

and mutated it to:

To fix this, you need to "kill" the surviving mutant. How do you do that? Typically, the fact that a mutant survived means at least one expectation is missing.

Look through your code to see what expectation, if any, is not there:

The first stab fakes the expectation to make it fail. You now have nine microtests; eight succeed, and the ninth test fails:

Replace hard-coded values with an expectation of a confirmation example:

Now for the moment of truth. Will this new expectation remove all mutants? Run the mutation testing and check the results: 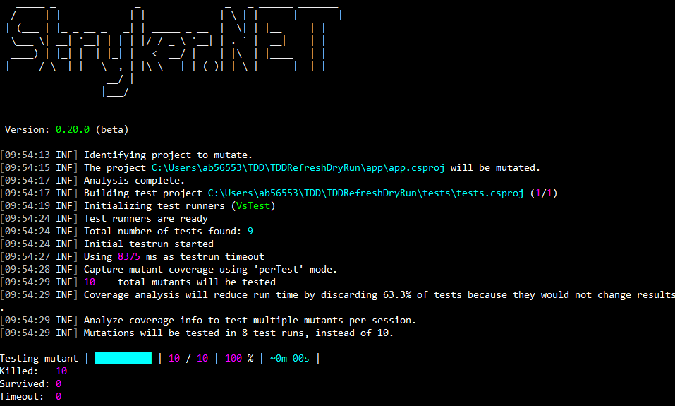 Success! All 10 mutants were killed. Great job; you can now ship this API with confidence.

If there is one takeaway from this exercise, it's the emerging concept of skillful procrastination. It's an essential concept, knowing that many of us tend to rush mindlessly into envisioning the solution even before our customers have finished describing their problem.

Procrastination doesn't come easily to software engineers. We're eager to get our hands dirty with the code. We know by heart numerous design patterns, anti-patterns, principles, and ready-made solutions. We're itching to put them into executable code, and we lean toward doing it in large batches. So it is indeed a virtue to hold our horses and carefully consider each and every step we make.

This exercise proves how ZOMBIES help you take many deliberate small steps toward solutions. It's one thing to be aware of and to agree with the Yagni principle, but in the "heat of the battle," those deep considerations often fly out the window, and you end up throwing in everything and the kitchen sink. And that produces bloated, tightly coupled systems.

Another essential takeaway from this exercise is the realization that the only way to keep a system working at all times is by adopting an iterative approach. You developed the shopping API by applying some rework, which is to say, you proceeded with coding by making changes to code that you already changed. This rework is unavoidable when iterating on a solution.

One of the problems many teams experience is confusion related to iteration and increments. These two concepts are fundamentally different.

An incremental approach is based on the idea that you hold a crisp set of requirements (or a blueprint) in your hand, and you go and build the solution by working incrementally. Basically, you build it piece-by-piece, and when all pieces have been assembled, you put them together, and voila! The solution is ready to be shipped!

In contrast, in an iterative approach, you are less certain that you know all that needs to be known to deliver the expected value to the paying customer. Because of that realization, you proceed gingerly. You're wary of breaking the system that already works (i.e., the system in a steady-state). If you disturb that balance, you always try to disturb it in the least intrusive, least invasive manner. You focus on taking the smallest imaginable batches, then quickly wrapping up your work on each batch. You prefer to have the system back to the steady-state in a matter of minutes, sometimes even seconds.

That's why an iterative approach so often adheres to "fake it 'til you make it." You hard-code many expectations so that you can verify that a tiny change does not disable the system from running. You then make the changes necessary to replace the hard-coded value with real processing.

Once you get to that state, you can be fairly confident that you can ship the solution.

Many thanks to inimitable Kent Beck, Ron Jeffries, and GeePaw Hill for being a constant inspiration on my journey to software engineering apprenticeship.

And may your journey be filled with ZOMBIES.

Zombies are bad at understanding boundaries, so set limits and expectations for what your app can do.