No matter how long you work as an application developer and no matter what programming language you use, you probably still struggle to increase your development productivity. Additionally, new paradigms, including cloud computing, DevOps, and test-driven development, have significantly accelerated the development lifecycle for individual developers and multifunctional teams.

You might think open source tools could help fix this problem, but I'd say many open source development frameworks and tools for coding, building, and testing make these challenges worse. Also, it's not easy to find appropriate Kubernetes development tools to install on Linux distributions due to system dependencies and support restrictions.

Fortunately, you can increase development productivity on Linux with Quarkus, a Kubernetes-native Java stack. Quarkus 2.0 was released recently with useful new features for testing in the developer console.

If you need to add more than 10 dependencies (e.g., database connections, object-relational mapping, JSON formatting, REST API specifications) to your Java Maven project, you must define more than 60 configurations with keys and values in one or more application.properties files. More configurations decrease readability for individual developers and are harder for developer teams to manage.

Quarkus has an interactive interface to display all dependencies that have been added. It is available at the localhost:8080/q/dev endpoint after you start Quarkus dev mode with the mvn quarkus:dev command. You can also update configurations in the DEV user interface (UI), as Figure 1 shows, and the changes will automatically sync with the application.properties file.

(Note: You can find the entire Quarkus application code for this article in my GitHub repository.) 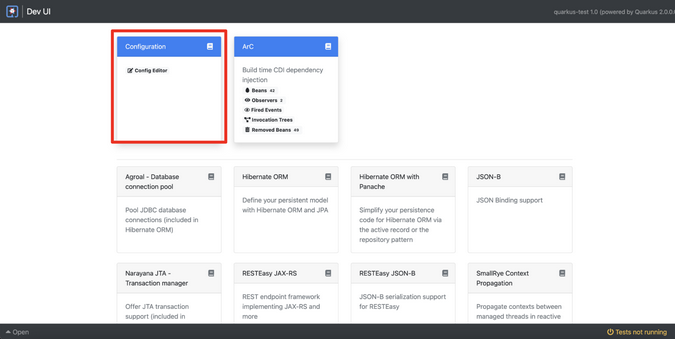 When developing an application, anything from a monolith to microservices, you have to test your code. Often, a dedicated quality assurance (QA) team using external continuous integration (CI) tools is responsible for verifying unit tests. That's worked for years, and it still does, but Quarkus allows programmers to run tests in the runtime environment where their code is running as it's being developed. Quarkus 2.0 provides this continuous testing feature through the command-line interface (CLI) and the DEV UI, as shown in Figure 2.

Continuous testing is not running when a Quarkus application starts. To start it, click "Tests not running" on the bottom-right of the DEV UI. You can also open a web terminal by clicking "Open" on the left-hand side of the DEV UI. Both of those options are highlighted in Figure 2, and an example test result is shown in Figure 3.

If you change the code (e.g., "Hello" to "Hi" in the hello() method) but not the test code (regardless of whether the feature works), the test will fail, as shown in Figure 4. To fix it, update the test code along with the logic code.

You can rerun the test cases implemented in the src/test/java/ directory. This feature alleviates the need to integrate with an external CI tool and ensures functionality while developing business logic continuously.

Quarkus 2.0 helps solve this problem by providing dev services built on Testcontainers. For example, you can test applications if they work in the production database, PostgreSQL, rather than an H2 in-memory datastore with the following configurations:

In the code above:

(4) The kind of database you will connect for production

(6) The container image name to use for DevServices providers; if the provider is not container-based (e.g., H2 database), then this has no effect

When Quarkus restarts with the new configuration, the Postgres container image will be created and start running automatically, as in Figure 5.

This feature enables you to remove the production datastore integration test. It also increases your development productivity due to avoiding environmental disparities in the development loop.

Quarkus 2.0 increases developer productivity with built-in continuous testing, an interactive DEV UI, and dev services. In addition, it offers additional features for improving developer experiences such as live coding, remote development mode on Kubernetes, and unified configurations that accelerate the development loop. Quarkus 2.0 is certainly no exception! Try it out for yourself here!

How to create your first Quarkus application

The Quarkus framework is considered the rising star for Kubernetes-native Java.

A quick example of going serverless on Knative. 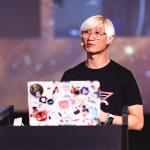