In this tutorial, you will learn how to run two containers in a pod to host a WordPress site.

Whether you're interested in them as part of your job, for future job opportunities, or just out of interest in new technology, containers can seem pretty overwhelming to even an experienced systems administrator. So how do you actually get started with containers? And what's the path from containers to Kubernetes? Also, why is there a path from one to the other at all? As you might expect, the best place to start is the beginning.

On second thought, starting at the beginning arguably dates back to early BSD and their special chroot jails, so skip ahead to the middle instead.

Not so very long ago, the Linux kernel introduced cgroups, which enables you to "tag" processes with something called a namespace. When you group processes together into a namespace, those processes act as if nothing outside that namespace exists. It's as if you've put those processes into a sort of container. Of course, the container is virtual, and it exists inside your computer. It runs on the same kernel, RAM, and CPU that the rest of your operating system is running on, but you've contained the processes.

More importantly, you can run more than one container of the same application when there's high demand for it.

Now that you know what a container is. The next step is to run one.

[ Get the cheat sheet: What’s the difference between a pod, a cluster, and a container? ]

I recommend WordPress as a start. It's a popular web application that's easy to use, so you can test drive the app once you've got the container running. While you can easily set up a WordPress container, there are many configuration options, which can lead you to discover more container options (like running a database container) and how containers communicate.

I use Podman, which is a friendly, convenient, and daemonless container engine. If you don't have Podman available, you can use the Docker command instead. Both are great open source container engines, and their syntax is identical (just type docker instead of podman). Because Podman doesn't run a daemon, it requires more setup than Docker, but the ability to run rootless daemonless containers is worth it.

If you're going with Docker, you can skip down to the WordPress subheading. Otherwise, open a terminal to install and configure Podman:

Containers spawn many processes, and normally only the root user has permission to create thousands of process IDs. Add some extra process IDs to your user by creating a file called /etc/subuid and defining a suitably high start UID with a suitable large number of permitted PIDs:

Do the same for your group in a file called /etc/subgid. In this example, my primary group is staff (it may be users for you, or the same as your username, depending on how you've configured your system.)

Finally, confirm that your user is also permitted to manage thousands of namespaces:

If your user doesn't have permission to manage at least 28,000 namespaces, increase the number by creating the file /etc/sysctl.d/userns.conf and enter:

Running WordPress as a container

Now, whether you're using Podman or Docker, you can pull a WordPress container from a container registry online and run it. You can do all this with a single Podman command:

Give Podman a few moments to find the container, copy it from the internet, and start it up.

Start a web browser once you get a terminal prompt back and navigate to localhost:8080. WordPress is running, waiting for you to set it up. 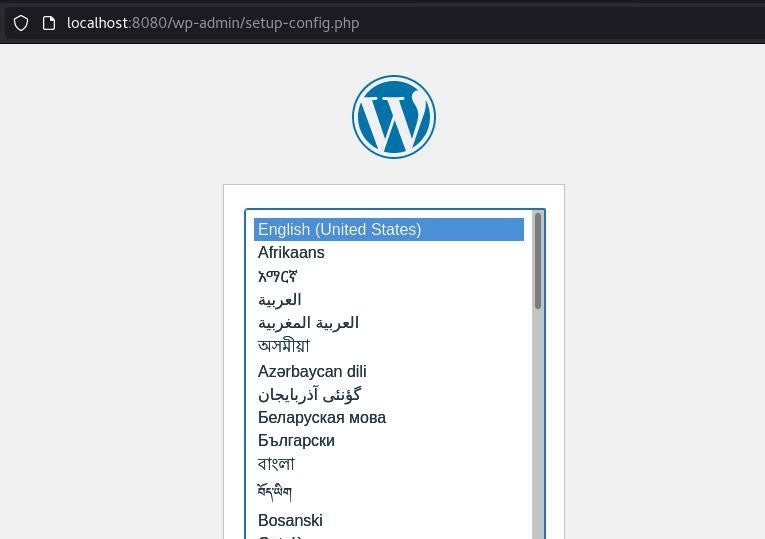 It doesn't take long to reach your next hurdle, though. WordPress uses a database to keep track of data, so you need to provide it with a database where it can store its information.

Before continuing, stop and remove the WordPress container:

3. Run containers in a pod

Containers are, by design and, as their name suggests, self-contained. An application running in a container isn't supposed to interact with applications or infrastructure outside of its container. So when one container requires another container to function, one solution is to put those two containers inside a bigger container called a pod. A pod ensures that its containers can share important namespaces to communicate with one another.

Create a new pod, providing a name for the pod and which ports you want to be able to access:

Confirm that the pod exists:

Add a container to a pod

Now that you have a pod for your interdependent containers, you launch each container by specifying a pod for it to run in.

First, launch a database. You can make up your own credentials as long as you use those same credentials when connecting to the database from WordPress.

Next, launch the WordPress container into the same pod:

Now launch your favorite web browser and navigate to localhost:8080.

This time, the setup goes as expected. WordPress connects to the database because you've passed those environment variables while launching the container. 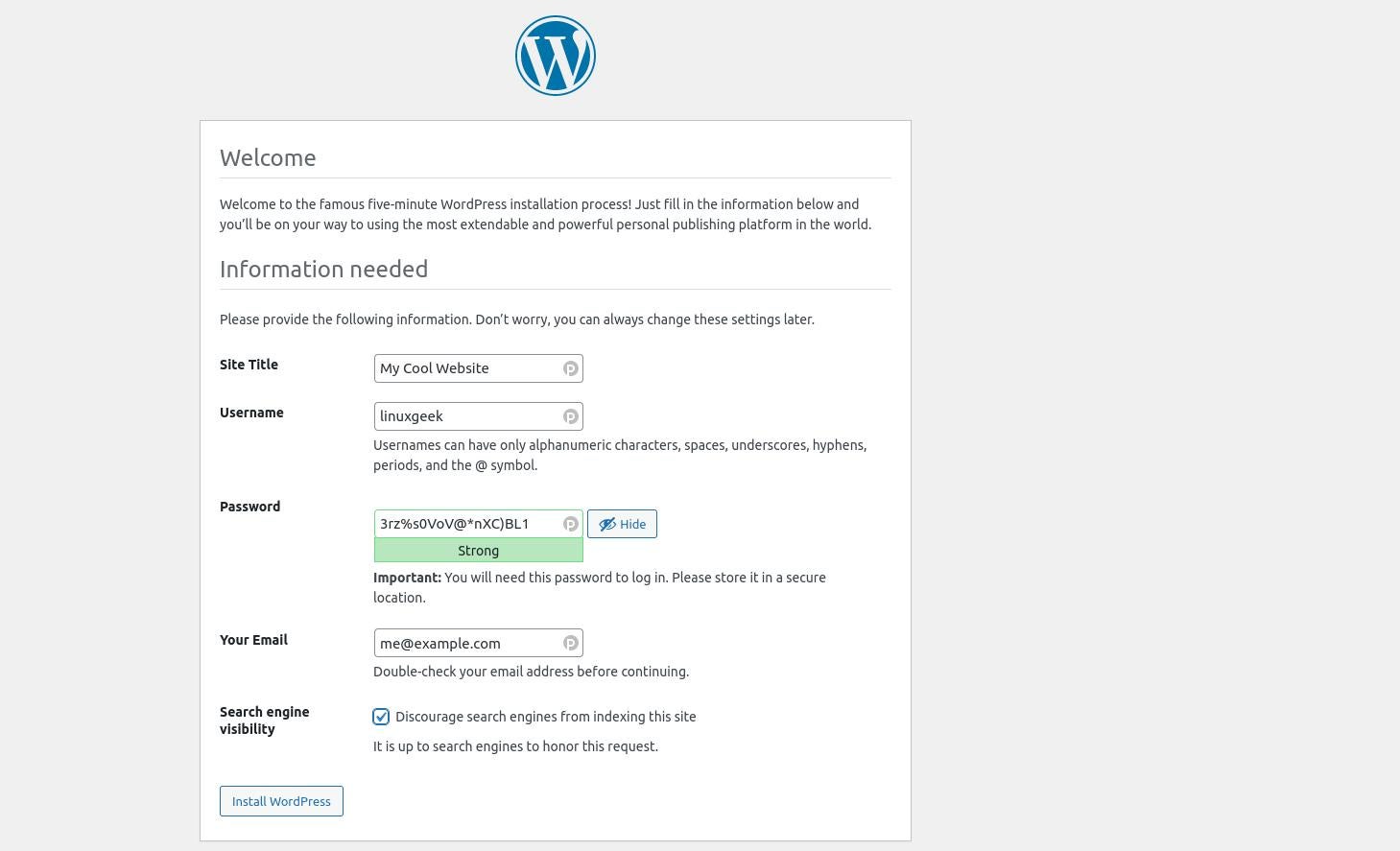 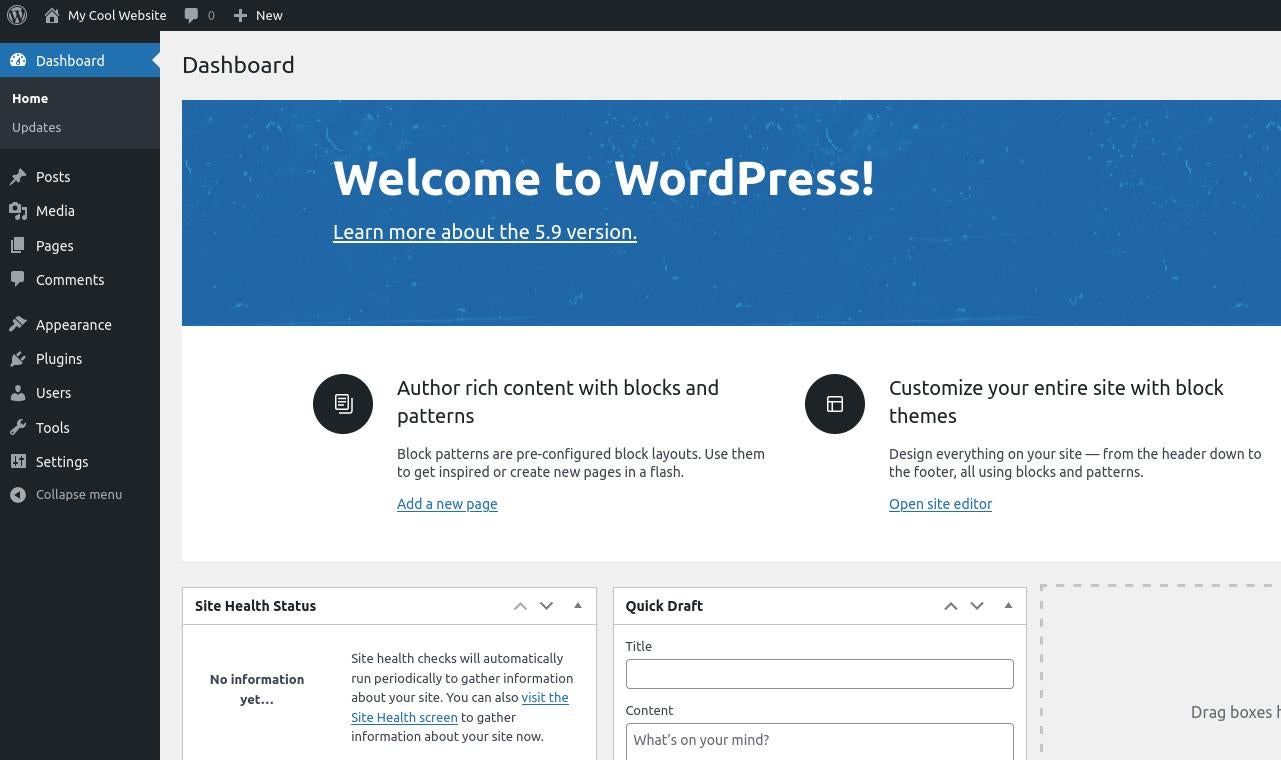 You've created two containers, and you've run them in a pod. You know enough now to run services in containers on your own server. If you want to move to the cloud, containers are, of course, well-suited for that. With tools like Kubernetes and OpenShift, you can automate the process of launching containers and pods on a cluster. If you're thinking about taking the next step, read 3 ways to get started with Kubernetes by Kevin Casey, and give the Minikube tutorial he mentions a try.

What to read next
Tags
Containers
WordPress
Kubernetes
Seth Kenlon