I recently started a new job at MongoDB as a Principal Community Manager, spearheading the MongoDB Community Champions program. In that role, I faced two challenges.

First, I was joining a brand new, fully remote team. Not only was I new myself, but the team as a whole was just beginning to form, with new members coming on board a couple of times per month. This team was also spread across several time zones, with about half of them older, established members who've been with the company for a long time and know each other pretty well, and the other half entirely new faces.

Second, the Community Champions program started during the pandemic. As a result, program participants from around the world had very little opportunity to meet each other and meld as a group. I wanted to find out more about what they wanted to discuss and learn, so I could use that to plan out the first few months of programming. I also wanted to give them a chance to talk with each other about their interests.

I ran these scenarios past a friend of mine, the fabulous Donna Benjamin, and she suggested an extremely useful tool from the Open Practice Library: Lean Coffee.

What is Lean Coffee?

Lean Coffee is a structured but agenda-less meeting. Participants gather, build their own agenda, and begin talking.

You start with a Kanban board with To Discuss, Discussing, and Discussed columns. Optionally, you can add an Actions section to write down anything that needs following up after the meeting. Participants get a fixed amount of time to brainstorm topics to talk about. Each topic is then written on a sticky note.

All sticky notes are placed in the To Discuss column and clustered by grouping similar topics together, also known as affinity mapping. This is followed by a round of dot voting, which is exactly what it sounds like: voting by placing a dot on a sticky note to indicate your choice. At the end of the process, you might have a board that looks something like this: 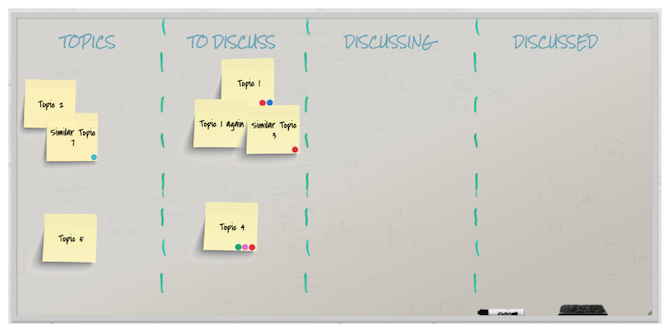 The most popular topic moves to the Discussing column, then you set a timer for 5-7 minutes and start the group talking. When the timer goes off, everyone votes again on whether to keep going for another few minutes or switch to the next topic. Stickies are moved and topics are discussed accordingly until the allotted meeting time runs out.

Lean Coffee all but guarantees you'll be harnessing the passion and interest of the group, since these are all going to be things they want to talk about. It's also great because the format is extremely lightweight; you can do it with just a whiteboard, a few pens, and some sticky notes in person or with virtual tools that emulate them, such as Scrumbler.

This is an example of utilizing the Lean Coffee pattern as intended: to foster a conversation among people who may or may not know each other, but for whom you want to try and surface commonalities and spark discussion.

First, choose a time that works best for your team as a whole. This is critical, because if your focus is on building up team cohesion, you do not want some of your team to feel left out. Lean Coffee can stretch or shrink to fill whatever time you have available, but an hour is a good amount of time.

Since you will be using virtual tools, you may want to begin with a short icebreaker exercise to get folks used to the tool and the voting process. For example, you could put up a couple of open-ended questions on sticky notes and allow people to vote on which one they want to answer as a group. Next, run the Lean Coffee exercise as documented: Set a timer, let each person drag over sticky notes and write down their topics, cluster the responses together, then discuss!

During our first run of these, we talked about everything from where we would most like to travel to what our favorite kinds of food were and what hobbies we had. There were insights and laughter, and the team came away feeling it was a really positive experience.

With the Champions, it is impossible to get everyone on a call at the same time due to the international nature of the group, everyone's personal schedules, and so on. But it's possible to run a modified, more drawn-out version of Lean Coffee for this situation.

First, walk folks through how the tool generally works and what they should do. You can do this live on a video meeting or via a prerecorded video. For topic gathering, set the time limit for something like a week to 10 days to accommodate peoples' various schedules, vacations, sick kids, and anything else that might come up. Expect that because the deadline is extended and there's no real-time component, you will need to send one or two gentle reminders to folks to participate. You should also expect that, despite your efforts, there will be some drop-off in participation.

After topics are in, you can cluster them as you do in the synchronous version. Since you can't talk through this in real time as a group, you will probably want to add headers above each cluster to explain your thinking. Some of our clusters were Best Practices, Learn about Product X, and so on. For clusters that already clearly have consensus, you can wait for the voting process or just go ahead and move those to the To Be Discussed column proactively.

Repeat the "timer" (and the gentle reminders) with the voting process, leaving a week or so for folks to get their votes in. If there are a large number of topics generated, you may want to allow each member more than one vote—up to three, for example. By taking the highest-clustering and highest-voted topics, you effectively have a backlog of meeting topics. Set a meeting schedule over as many weeks or months are needed and work your way down the topic list for each meeting.

This approach is definitely not as dynamic and exciting as the real-time version of Lean Coffee, but the basic mechanics serve the same purpose of ensuring that the members are talking about things that are relevant and interesting to them. This is also a useful approach if you, like me, need to track down one or more people (such as product managers or engineers) in order to have a useful discussion about a given topic.

Lean Coffee is a versatile, fun, and engaging way of allowing relative strangers to meet each other, interact, find common ground, and learn from each other. Its simplicity allows it to be modified for a variety of remote and in-person gatherings and used for a variety of purposes.

There are dozens of other patterns like this in the Open Practice Library, so you should definitely check it out!

Contributing to the Open Practice Library is a fun way to participate in a global community of practitioners who are all willing to share their knowledge and improve their own... 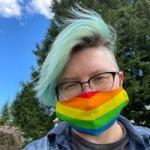 Angie is a Principal Community Manager at MongoDB, and leads MongoDB's Community Champions program.
More about me