In this demonstration, I facilitate removing unwanted files in the album directories. 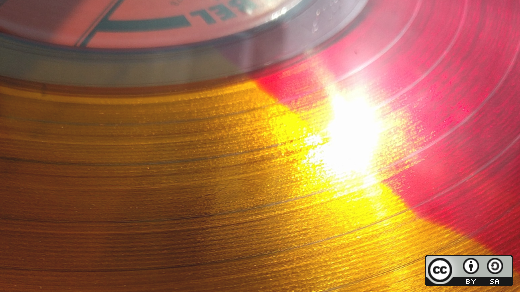 In this series, I'm developing several scripts to help in cleaning up my music collection. In the last article, we used the framework created for analyzing the directory and sub-directories of music files, checking to make sure each album has a cover.jpg file and recording any other files that aren't FLAC, MP3, or OGG.

I uncovered a few files that can obviously be deleted—I see the odd foo lying around—and a bunch of PDFs, PNGs, and JPGs that are album art. With that in mind, and thinking about the cruft removal task, I offer an improved script that uses a Groovy map to record file names and counts of their occurrences and print that in CSV format.

Get started analyzing with Groovy

If you haven't already, read the first three articles of this series before continuing:

They'll ensure you understand the intended structure of my music directory, the framework created in that article, and how to pick up FLAC, MP3, and OGG files. In this article, I facilitate removing unwanted files in the album directories.

The framework and the album files analysis bits

Start with the code. As before, I've incorporated comments in the script that reflect the (relatively abbreviated) "comment notes" that I typically leave for myself:

This is a pretty straightforward set of modifications to the original framework.

Lines 17-27 analyze the file names. I avoid any files ending in .flac, .mp3 or .ogg as well as cover.jpg files.

Lines 23-26 record file names (as keys to fileNameCounts) and counts (as values). If the file is actually a directory, I append a / to help deal with it in the removal process. Note in line 26 that Groovy maps, like Java maps, need to be checked for the presence of the key before incrementing the value, unlike for example the awk programming language.

I run this as follows:

Then I load the resulting CSV into a LibreOffice spreadsheet by navigating to the Sheet menu and selecting Insert sheet from file. I set the delimiter character to &$124;. 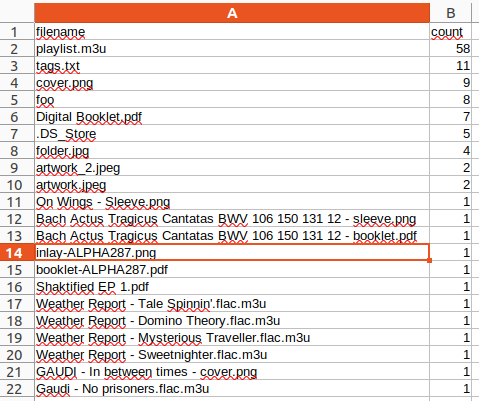 I've sorted this in decreasing order of the column count to emphasize repeat offenders. Note as well on lines 17-20 a bunch of M3U files that refer to the name of the album, probably created by some well-intentioned ripping program. I also see, further down (not shown), files like fix and fixtags.sh, evidence of prior efforts to clean up some problem and leaving other cruft lying around in the process. I use the find command line utility to get rid of some of these files, along the lines of:

I suppose I could have used another Groovy script to do that as well. Maybe next time.

How I analyze my music directory with Groovy

To simplify Java's clunkiness, I made a Groovy tool to analyze my music directory.

Here's how I use the JAudiotagger library with a Groovy script I created to analyze my music files.

Here's how I use open source tools to analyze my music directory including album cover files.