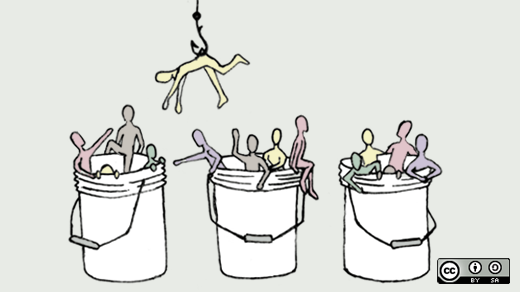 Over the years, I've had many people label me as a marketing guy just because I help build brands. I don't like being labelled, but I particularly don't like that marketing label. Why?

In my view, traditional marketing sets up an adversarial relationship, a battle of wills pitting seller vs. buyer.

What's the alternative? I believe companies should stop trying to build relationships with those interested in their brands using a marketing-based approach and instead move to a community-based approach where the culmination of the relationship is not always a transaction, but instead a meaningful partnership or friendship that may create multiple valuable outcomes for both sides.

How do you do this? Consider beginning by eradicating three of the most common words in the marketing vocabulary: audience, message, and market.

So you better understand what I mean, let me attempt to use all three of these words in a typical sentence you might hear coming out of a marketer's mouth:

We need to develop some key messages we can use to market to our target audience.

Yikes. So much not to like in there. Let me break this one down.

You hear companies talk about their "target audiences" all the time. So what's wrong with that?

The word audience implies that the company is talking and the people on the other end are listening. This sort of binary, transactional description of the relationship seems so dated to me.

Certainly in the glory days of advertising where companies had the podium of TV, magazine, and newspaper ads, the word audience was more appropriate. After all, no one ever got far talking back to the TV set.

But in the age of Twitter and Facebook, companies must respect that everyone has the podium. Everyone is talking, everyone is listening.

Where most marketing folks would use the word audience, I often substitute the word community. By thinking of those who surround your brand as members of communities rather than simply as ears listening to you, you'll already be on your way to a healthier, deeper relationship with the people who engage with your company.

The word message bothers me for the same reason. It is such an antiquated, transactional term. When a company talks about "creating messaging" or "delivering targeted messages" I start thinking we should call the Pony Express.

I believe the move to a community-based approach begins when you quit worrying about "delivering messages" and begin thinking about sharing stories, joining conversations, or sparking dialogue.

These are much better ways to communicate authentically in a collaborative world.

Perhaps the word that bugs me most is market (used as a noun or a verb) and its related friend consumer. Companies that think of people interested in them as consumers or markets take what could become a multi-dimensional relationship and whittle it down to one dimension: a transaction.

If you think of someone as part of your "target market" or a "consumer" you are making your interest in them abundantly clear. You want them to consume something. You want their money.

But what if there were more that people who are interested in your brand could share besides just their money? Perhaps they have valuable ideas that might make your company better? Perhaps they'd be willing to volunteer to help you achieve your mission in other ways?

When you stop thinking of the people that care about your company as consumers or a market, you can begin to see opportunities that you would have been blind to before.

Want an example? Look anywhere in the open source world. Sure there are buyers and sellers, but there are also lots of people bringing value in other ways. Developing code. Hosting projects. Writing documentation. The list goes on.

So let me be the first to admit these three words are the tip of the iceberg. Moving a company from a marketing-based to a community-based approach to building relationships will take more than changing a few words. It will require you to embrace new media, new skill sets, and a totally new way of thinking.

But you have to start somewhere.

Do you see other things that may need to change as we move from a marketing-based to community-based approach to building brands and companies?

I'd love to hear your ideas.

What to read next
Tags
Business
Marketing
Branding
Chris Grams