Is the business of FOSS really community software? 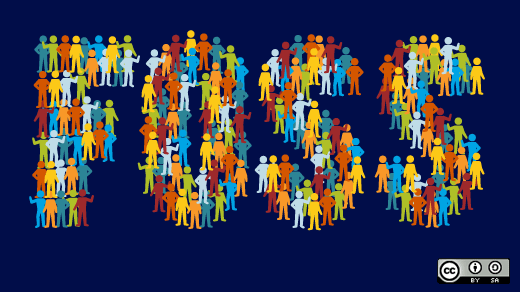 Which term best describes the kind of software you work on?

We are all international now.

I recently took part in a conversation at the TYPO3 Eastern Europe conference in Cluj-Napoca, Romania at which a very interesting proposition was put forward. The story starts in Malmö, Sweden where I’m temporarily remote working, away from my usual reporting office in Brno, Czech Republic. I work as a Senior Software Engineer for Red Hat, and I’m a self proclaimed advocate of free and open source software (FOSS). The reason I’m name dropping these locations will become clear in a moment. Whilst in Malmö, I took it upon myself to visit Foo Cafe, a meeting place for techies and industry types to, in the words of Foo Cafe, "learn, create and share."

I was really impressed with the way the workshops, conferences, and talks were organised and by the enthusiasm of the attendees. The diversity of the people attending Foo Cafe was extraordinary in comparison to other networking events I have visited. This made for a lively atmosphere and a refreshingly engaging environment to share ideas. I found it very easy to talk with people from a broad range of occupations and backgrounds and was excited by the passion and sincerity of the people I met.

A few weeks into my stay I received mail from the CEO of a local web design agency, which I saw had been sent to a number of people. The mailshot was asking for feedback regarding a blog post. Like anyone who is going to propose a bold idea, Robert Lindh, wanted to make sure he wasn’t completely crazy!

I had met Robert Lindh early on in my stay in Malmö. He and his business partner Fredrik Ardmar were successfully running two businesses providing web design and digital marketing respectively. In his mailshot, Rob was asking a question which I thought deserved attention. He wanted to know if it was time for a re-branding of FOSS! I knew it was going to be a contentious issue given the history of FOSS. The division of the community after the formation of the Open Source Initiative (OSI) and the split from the Free Software Foundation was a painful ordeal. What I read, however, was a compelling case to rethink the terms we use to describe what it is that we do, and to send a clearer, more inclusive message for FOSS.

Fast forward a couple of months and that message is now on Opensource.com. I urge you to read the article Robert wrote to get better idea of what was proposed.

Rob also invited me to join him as a guest speaker at TYPO3 Eastern Europe where the theme of the conference was to increase adoption of the TYPO3 content management solution in eastern Europe. We could not have hoped for a better time and place to start the conversation given the diversity of the region and its multicultural and multilingual nature. The talk was well-received, and we won the competition for the best topic at the conference. That was unexpected and did much to reaffirm our original convictions that this conversation was long overdue. The feedback we received was fantastic, and the TYPO3 community shared our belief that we need to rethink our message when promoting adoption of FOSS solutions in non-English speaking countries.

While at the conference, I was introduced to Olivier Dobberkau and Ben Van 't Ende. Olivier is the president of the TYPO3 Association, and Ben is the community leader. There was much deliberation between us and Rob about "community software" and how it can be used to promote FOSS. We decided that it had to be extention of FOSS and not a replacement for it. Community software would be provide an alternative message for solution providers to opt into if they felt they had issues with the existing message.

Ben remarked on the importance of inclusiveness and diversity. From his standpoint it was imperative that we not only chose a term that reflected these attributes, but also encouraged them. We decided to open up the discussion and ask for suggestions regarding what term would best capture this in case there was a better one than community. The conversation continued online at Opensource.com and offline with a slew of meetings and gatherings with the industry.

It's a business thing

The response was really interesting. For developers and other technical people already dealing with FOSS, it was more about a question of education rather than the formulation of a new term. That was unsurprising. What was interesting were the opinions of other, non-technical people in the industry. We started receiving emails and feedback that was overwhelmingly in favour of an alternative term. Nearly all the suggestions were based on either community, co-operation, or collaboration. Suggestions are still coming in. Opensource.com kindly agreed to run a poll to make the process easier, transparent, and fun.

We are looking for a term that translates well in countries in the EMEA region as well as captures the values and nature of our endeavours.

Sal - Salim Badakhchani | Certified I.T. professional, with over 20 years of experience, specialising in the banking and telecommunications industry. Passionate supporter of Community Software developed under Free and Open Source (FOSS) licenses and an early adopter and advocate of those technologies. Strong all rounder with broad industry experience spanning development and operations. Expert in defining process, documenting work flow, identifying best practice and developing tooling for...
More about me

If your goal is to provide a business friendly facet to the same underlying free and open source software movement then the message is crucial.

The stated problem is that people outside the community do not just "get it".

The word community is not one that communicates the professional nature of the work that is done; typically far beyond that employed in many small software houses. In fact Community suggests sitting around talking, socialising and having a drink - it's where you go to sell something. Nor does it address the business benefit aspect of OSS: ten companies contribute 1 man day - each gets 10 man days of benefit. That's an economic win based on collaboration.

Sal on 17 Nov 2014 Permalink
Thanks for the feedback, its much appreciated. The reason the word community is getting traction is two fold. Its commonly used in industry (Red Hat Community, TYPO3 community, Apache Community etc) and that is translates better that words like "Free" and "Open". Community Software is becoming the international business face of FOSS and that's great news for those of us who care about adoption. We need the FSF asn Free Software to communicate about the philosophy of what we do and we need The OSI and Open Source to espouse the superiority of technology that can be freely collaborated on. Community Software, given the way its forming, is talking about the value of the software. Its a language that business understands...no value no sale. We need to all these aspects of our community working together to if we are going to drive out inferior propitiatory software...especially in international markets.

Sal on 18 Nov 2014 Permalink
I doubt it and if that is the case I don't think the impact is critical. I hope that when people talk about community software it will be understood that they are referring to FOSS especially if they are talking about community in another language. The context for this conversation in international markets and I think that is being missed here but that does not surprise me either. We have to think international if we are to go forward.

There is a logical fallacy in attempting to separate developers from business people.

I for one, have been in both groups since I formed my own company decades ago.

There is no way around the ever-present need to educate the target market. Adding a seemingly conflicting term will only muddy the waters.

Sal on 18 Dec 2014 Permalink
To address your first point I agree that the distinction can be blurred at an individual level but in general terms I think its a safe bet to say people tend to organise into groups based on their professions when it comes to business. As an I.T. contractor, having run my own business for 10 years, I understand what your saying but I would still identify as an engineer rather than a businessman. Buy I don't see why this is relevant to the core message. Regarding your second point I have to say its becoming a little Cliché for me to hear this argument. People say it about others but never provide any evidence that it is the case. I also happen to think that paranoid people are beyond my help. We have to reach out to those we can help. Your third point is perhaps the most valid but I disagree with you based on the anecdotal evidence that I have encountered. You see the waters are already muddy. That is why we got such a positive response from the people we spoke to. I think its worth re-iterating that the target audience for this change was for small to medium sized business leaders working in non English speaking international markets. They have so far been very keen to use the term as it does the opposite of what you suggest. Thanks for your comments.

thanks for the best idea

At first, I wanna to thank you for this great work. I am loving the open source programs and searching for it instead of paid ones.