Why the community needs an open credential system 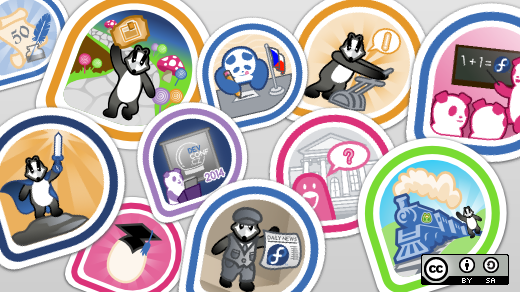 Back in 2013, some contributors to the Fedora project were puzzled. They'd been issued digital badges like Paranoid Panda, Curious Penguin, and Master Editor but weren't sure why.

Master Editor seemed relatively straightforward to understand—after all, Fedora contributors are known for their edits to the wiki—but what were the first two all about? Upon further investigation, it was revealed that the Paranoid Panda badge was awarded for updating one's password on their account within the Fedora Account System, and Curious Penguin for their first interaction with the Ask Fedora forum.

The Fedora Badges system, which is interoperable with Mozilla's Open Badges Infrastructure (OBI), lists more than 17,000 contributors who have been issued digital badges. And, at the top of the leaderboard is Kevin, who has been issued 142 badges—less than half of the overall number of badges available! Those badges Kevin has achieved are a mix of Content, Development, Community, Quality, and Event badges, with some easier, and some harder, to obtain.

But, why do we need open credentialing?

Reason #1: Context is everything 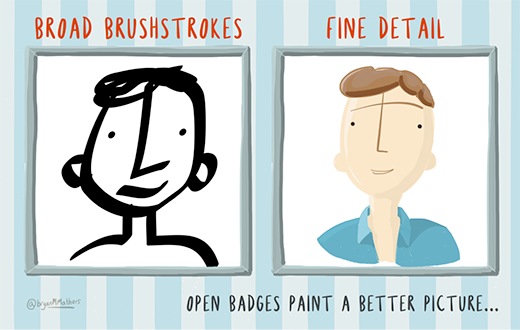 Traditional qualifications are chunky, and we tend to use them as proxies for knowledge, skills, and behaviors. Take the university degree, for example. A few decades ago this was an indicator of quality—a way of differentiating between for elite candidates and the rest. Now, however, because of credential inflation, it's used as a broad recruitment filter for everything from executive assistants to construction supervisors. We need something more granular.

Historically, the difficulty of issuing credentials smaller than the standard unit size has been lack of recognition. After all, it can be difficult enough ascertaining the validity of traditional credentials. What's needed is a way to peek inside credentials to see what the person earning them has to do. What's also needed is a standardized way of being able to display credentials in digital form.

That's where Open Badges come in.

The OBI means that the badge representing the credential has information baked in. This information (metadata) includes who issued the badge, who it was issued to, the criteria for earning the badge, whether it expires, and even a link to any relevant evidence. Each badge is unique to the badge earner.

Traditional credentials can be seen as broad brushstrokes. They paint an outline of an individual. But to get the level of detail you might need to make a hiring decision, for example, badges provide a standardized, interoperable way to bypass the usual gatekeepers.

Reason #2: Power to the people 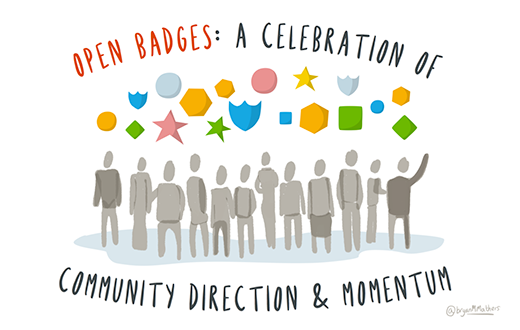 One of the many reasons that users of open source software enjoy using various distributions of Linux is that it's built upon open standards. The opposite of this would be approaches that are not interoperable: those that offer a closed, proprietary ecosystem. In the world of credentials, paper-based certificates are the equivalent of that closed ecosystem. They exist independently of one another, providing no evidence of the context in which what the certificate holder was successful.

Open Badges provide an interoperability layer between traditional silos, allowing credentials from one awarding organization to sit alongside those from another. In fact, because there are no gatekeepers to the OBI, it's not just awarding organizations that can issue badges: anyone can issue an Open Badge for anything. The individual is always in charge, so they might have a fun badge displayed alongside a PhD-level one. The value is generated from the criteria, existing reputation of the badge issuer, and any endorsement that from third parties.

All this leads to a much more equitable landscape. Individuals who have earned badges based on particular knowledge, skills, and behaviors can demonstrate this directly, rather than having to pass through traditional filters such as degree programs. Open Badges allow us, the people, to take back the way that we trust and recommend one another. 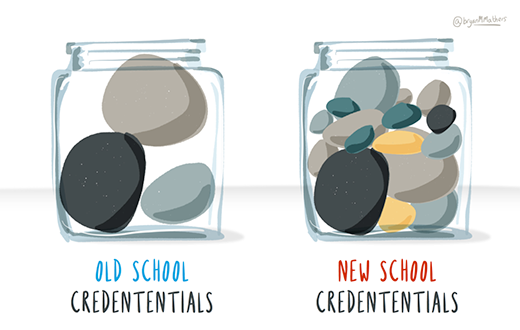 As Gervase Markham, a former colleague at Mozilla, once said, the web is "one of the greatest drivers of human prosperity and happiness the world has ever seen." However, it is threatened by those who wish to lock it down for their own ends. The way that we counteract these threats is by working together as a community, finding new and innovative ways to use the web to do things that extend our human potential. I believe Open Badges are one such use of the web.

There are many ways in which a large organization might try and own a part of the credentialing landscape. To some extent, we've already seen attempts at this, with the most high-profile example being LinkedIn's endorsement feature. These microcredentials only have value within the LinkedIn ecosystem, and no attempt is made to make them portable. Instead of accepting such siloed credentials, we can reclaim the credential ecosystem, blending top-down traditional credentials with bottom-up, more grassroots "crowdentials" that capture value within communities.

The web is the perfect medium for a new credentialing system. Just like the web, Open Badges are democratic, open, and distributed. The OBI is itself open source, as are many badge issuing solutions found on GitHub and other code repositories. Open Badges help move forward the open web.

Questions about Open Badges? The authors of this post are collaborating with the community on an Open Badges 101 course. This course is, at the time of writing, two-thirds complete. Pull requests via GitHub are very welcome, as are comments directly on the site using hypothes.is.

Doug Belshaw - I'm a consultant who helps people and organisations become more productive in their use of technology. With We Are Open Co-op, I work with my co-founders to spread the culture, processes, and benefits of open wherever we can.
More about me

Aleksandar Todorović on 27 Nov 2015 Permalink
I love badges! Unfortunately, I'm still not able to export my Fedora badges to my Mozilla Backpack because Fedora's system assigned the badges to USER (at) fedoraproject.org instead of assigning them to my actual email address. :(