NGINX: The secret heart of the modern web

Sarah Novotny is a technology evangelist and community leader for NGINX. I first met her at OSCON, where she's one of the program chairs. She makes it look easy on stage, but it's a tough job to help organize one of the largest open source events held each year.

She's also a self-proclaimed geek and recently made my list of 30 community managers to follow on Twitter. At NGINX, Novotny gets to work on a project that she describes as "the secret heart of the modern web." NGINX is one of the most-used web servers and is gaining popularity, which is one of the many reasons why she's excited to be part of its growing open source community.

We got a chance to catch up with Novotny prior to her talk at the Southern California Linux Expo (SCALE 13x), where she'll be giving an introduction to NGINX and, for fun, show some of the use cases in Docker containers. In this interview, Novotny also shares her thoughts on the excitement around containers and how they fit into the NGINX roadmap.

How did you get involved with open source? 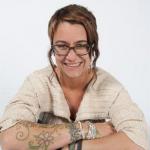 My first real job after school was at Amazon, back when it was a bookstore. They used a lot of open source software and I kept running into it, but didn't get drawn into the OSS (open source software) culture for another few years. Amazon was an amazing learning environment, but we were spending all our time struggling with what would be later dubbed "web scaling." I didn't have time to think about the broader impact of open source. At the time, I thought of it as simply software that was freely downloadable.

After leaving Amazon, I founded Blue Gecko with some former Amazon coworkers to offer remote database administration as a service. We supported Oracle products initially, and my role was systems engineer offering server architecture recommendations. A customer asked us for help with MySQL. I knew exactly enough to get myself in trouble with Oracle—I was at best a junior Oracle DBA, so I decided that I'd learn this simpler RDBM (relational database management system). At the time, it was version 3.23 and had limited functionality and scalability compared to Oracle. We eventually grew that request for support into an open source database business unit, and I started being active in the MySQL community—giving talks, running meetup groups, and co-hosting the OurSQL podcast with Sheeri Cabral.

What is NGINX? Why would someone choose it as a web server?

There are an amazing number of things that make NGINX special. There are technical reasons: its event-driven architecture makes it lightweight and incredibly efficient; there's been a practical choice to implement a limited number of things really, really well; and the early implementation of SPDY (pronounced "speedy") and attention to the HTTP 2.0 standards has been forward looking. There are great social reasons too: NGINX began as a one-person project with no documentation in English (tech's lingua franca), but the technical superiority of the product drove community adoption and translation of the documentation. In the web performance community, knowing about NGINX became practically a secret handshake—NGINX is the secret heart of the modern web.

For an evangelist, it is a dream job to help a company that has such an amazing reputation for technical superiority and dominant market position with so much space to grow. While we are the most-used web server at the 10,000 busiest websites, we've only just crept into the #2 position for websites overall. There's so much opportunity for performance improvement across the web. I want to help our customers improve their application performance and in turn have happier customers themselves.

Why do you think there is a lot of excitement around containers, and how do they fit into the NGINX roadmap?

I think that containers are the next logical evolution in the process of abstracting applications from operating systems and hardware. The abstraction and isolation of applications helps improve speed of development. We're already seeing different projects try to simplify the management of containers. Docker has decreased the complexities of adopting Linux containers directly by making containers even more portable with virtualization (for platforms like OS X) and packaging to bundle the virtualization layer with the containers. That said, there's a lot of work to do before containers are cleanly operationalized and ready for mainstream adoption in production. The NGINX repository is one of the top repositories at hub.docker.com with nearly 2 million downloads. NGINX fits nicely into a modern web architecture, both inside application containers and load balancing across containers.

Where do you see web content delivery going in the next five years?

Web content delivery is a narrow question. I'd rather say the next five years will be about composeable and interoperable microservices all speaking HTTP. The standardization on HTTP democratizes development. Smaller, more nimble individuals and companies innovate by filling a customer need. They create services that plug into or augment other tools by consuming data made available from other products or services over HTTP through APIs. These smaller products are built and evolved faster. They are building blocks to be assembled into masterpieces.

What will you be talking about at SCALE 13x?

My talk at SCaLE will be an introduction to NGINX. I'll cover the common use cases of static asset serving, load balancing, and reverse proxying, and for fun I'll be showing these uses in Docker containers.