The right way to fail 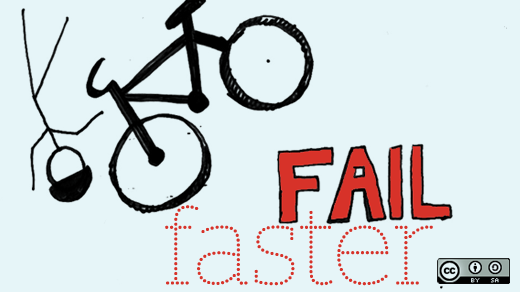 At OSCON this year, Amye Scavarda and Leslie Hawthorn gave a talk entitled "Fear of Failing Fast: How to Avoid Sabotaging Your Success." I just had to attend. Here's a summary of the talk.

When will we fail?

In the open source industry, we often hear that we should fail quickly and often, but that doesn't make failure any less scary. Failure seems like a personal problem, but it's really a corporate problem. We use the phrase "failure is not an option," and people are so proud to live by it. The fact of the matter, said Scavarda and Hawthorn, is that this statement should say "failure is not an option; it is a requirement." The truth is that it's not a matter of whether we will fail, but when we will fail and what will be our timeline for our recovery.

In reality, Scavarda and Hawthorn said, we should pay more attention to our failures than our successes, because our failures teach us much more. But even if we understand that failure is going to happen regardless of what we do, why is it still so hard?

Hawthorn coined a new term: Micromanagement in Avoidance of Failure (MAF). This describes people making plans to prevent failure even though we all know that we're all going to fail at some time or another. The message here is: "It's okay to fail, but we're not going to let you fail." Scavarda and Hawthorn said this attitude leads to people's sitting on their hands, not trying to change anything because others are pulling them back, helping them avoid the risk of failing. It also shuts down dialogue and creativity in organizations. This is not the key to success by any means, Scavarda and Hawthorn said.

In risk-adverse environments, people only set goals they can achieve. They won't set stretch goals—or goals beyond those they know they can achieve. This leads to stagnation in the workplace. Stretching is good, Scavarda and Hawthorn said; working beyond what we know how to do is a great way to learn. And if we fail, at least we've learned something new in the process.

Scavarda and Hawthorn said leaders in our organizations can help encourage stretch goals by setting goals they know associates won't possibly meet, and then letting staff know they're happy with 30% of this goal getting completed. If we get more, then that's great. If leaders lay this out ahead of time, then they remove some of the fear of management retaliation for those trying to complete the task.

The right way to fail

Scavarda and Hawthorn said we need to celebrate what we've learned by failing. Instead of focusing exclusively on the failure, we can think about what we learned. Instead of stopping the story by saying "this bad thing happened," we might add to it, saying "but we learned that we need have this new infrastructure in place."

Some startups have actually built failure in to their culture, Scavarda and Hawthorn said. At annual reviews, employees must talk not only about successes but also failures—as well as lessons they learned from those failures. Without reflecting on those experiences, exployees won't be moving up in the organization, Scavarda and Hawthorn said. Admitting that we've failed and talking about what we've learned will get us that raise or that bonus (or some other incentives that come out of successful employee reviews).

We've all heard the quote from Albert Einstein: "A person who never made a mistake never tried anything new." That's what this talk from Scavarda and Hawthorn was all about. To help with this culture at our organizations, we need to own our mistakes. Faliing will never be fun or pleasant, but it can become so much easier if we own it. It's not the end of the world, people still respect us, and we're still doing good work.

Thank you for this really lovely recap of the talk!
It's always hard to be able to do a recap of two speakers, but you did a great job.

Don Watkins on 27 Jul 2015 Permalink
I love it. As a perfectionist I am plagued by the fear of failure and yet I know I have learned so much more from failure than from success. There are implications for this article outside of open source too.

Nicole C. Baratta on 27 Jul 2015 Permalink
Absolutely - I think it had a part in our entire life!