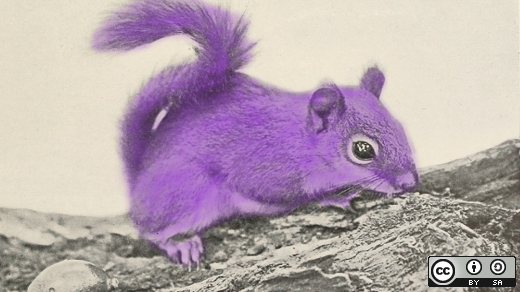 At OpenStack Summit this month in Austin, Colette Alexander will give a talk called Hunting for Purple Squirrels: Hiring OpenStack Contributors in the Wild. In this interview, she answers questions about her talk, and explains how major tech companies are like the Girl Scouts of the USA and how playing the cello helps her solve professional challenges.

Tell us about how you got started tinkering with computers.

My dad was a computer hobbyist, so he would build computers from parts, way back in the late '80s/early '90s, and I'd learn how to navigate around them to play video games (Zaxxon, Joust, Keen, Wolfenstein). Eventually he started running Linux and felt strongly his daughters should learn the basics of building web pages. I was probably 11 or 12 when I built my first website. Eventually, I made friends with a bunch of people who had accounts on Arbornet, and basically hung out in chat rooms and learned to prefer using Pine as my email client as a teenager. After helping to run the student-run web server in college, I mostly stepped away from that world while pursuing my music career. I was brought back into the fold by a friend who wanted some help administrating a survey-software platform for the Girl Scouts, and once I started teaching myself JavaScript, I was launched back into my nerd life.

Prior to working at HP and then IBM, you worked as a Senior Project Management Developer for the Girls Scouts of the USA. What cultural differences have you noticed between working for GSUSA and huge tech companies like HP and IBM?

Actually, I think GSUSA is quite a lot like HP and IBM culturally in that it's an older institution (100+ years), and it's quite large and spread out, with multiple Councils across the country. Girl Scouts has struggled in its recent past to engage members and keep innovating to deliver its very awesome and relevant core mission: building girls of courage, confidence, and character who make the world a better place. A lot of the same culture-change work that is being done there to pivot from older, more traditional ways of non-profit programming and serve girls better is the same kind of work that has to be done at larger/older for-profit institutions like HP and IBM, who really need to drive innovation internally at a faster pace to compete with smaller, more agile startups.

A lot of developers are also runners. One developer I interviewed told me that running helps him solve coding problems. How does playing the cello help you with professional challenges?

What a great observation about running! I do think balancing my career as a cellist and choosing to do tech at the same time has at times felt like running a marathon that never ends but always changes scenery. It's exhausting, but also constantly interesting. My work as a cellist, specifically working with rock bands, has really led to my strengths in my tech career: I have an uncanny knack for understanding and communicating with people in a way that's motivating, empathetic, and authentic. I think that's a huge part of my artist-self at work in my not-artist-life. I've noticed there is a lot of crossover from arts and music work in general to the tech world, specifically when it comes to coders who work on open source projects—I think that's because the problems of architecture and collaboration are also the underpinnings of making great art with people, too.

What are the top 3 tips you have for interviewing job candidates to help identify the right person for the position?

Way to make me give talk-spoilers!

What are a couple of traits or skills that are the best indicators for success for someone new to the OpenStack community?

A willingness to ask questions and be vulnerable while questioning—so, admitting when you don't know something and asking for help—and an ability to collaborate with folks who have differing viewpoints are two very important traits to have when getting started in OpenStack.

What is the biggest red flag to look for in the interview?

I don't know about "biggest," but one I tend to try to sniff out is a lack of empathy.

I think 2016 is shaping up to be the Year of the Open Source Haiku. Explain project management via Haiku.

What to read next
Tags
Business
OpenStack Summit
Rikki Endsley