How to avoid humiliating newcomers: A guide for advanced developers

To sustain an open source community's growth, we need to welcome new developers. Unfortunately, we are not always a welcoming bunch.

Every year in New York City, a few thousand young men come to town, dress up like Santa Claus, and do a pub crawl. One year during this SantaCon event, I was walking on the sidewalk and minding my own business, when I saw an extraordinary scene. There was a man dressed up in a red hat and red jacket, and he was talking to a homeless man who was sitting in a wheelchair. The homeless man asked Santa Claus, "Can you spare some change?" Santa dug into his pocket and brought out a $5 bill. He hesitated, then gave it to the homeless man. The homeless man put the bill in his pocket.

In an instant, something went wrong. Santa yelled at the homeless man, "I gave you $5. I wanted to give you one dollar, but five is the smallest I had, so you oughtta be grateful. This is your lucky day, man. You should at least say thank you!"

This was a terrible scene to witness. First, the power difference was terrible: Santa was an able-bodied white man with money and a home, and the other man was black, homeless, and using a wheelchair. It was also terrible because Santa Claus was dressed like the very symbol of generosity! And he was behaving like Santa until, in an instant, something went wrong and he became cruel.

This is not merely a story about Drunk Santa, however; this is a story about technology communities. We, too, try to be generous when we answer new programmers' questions, and every day our generosity turns to rage. Why?

I'm reminded of my own bad behavior in the past. I was hanging out on my company's Slack when a new colleague asked a question.

New Colleague: Hey, does anyone know how to do such-and-such with MongoDB?

Jesse: That's going to be implemented in the next release.

New Colleague: What's the ticket number for that feature?

He had missed my sarcasm, and his mistake embarrassed him in front of his peers. I laughed to myself, and then I felt terrible. As one of the most senior programmers at MongoDB, I should not have been setting this example. And yet, such behavior is commonplace among programmers everywhere: We get sarcastic with newcomers, and we humiliate them.

Why does it matter?

Perhaps you are not here to make friends; you are here to write code. If the code works, does it matter if we are nice to each other or not?

A few months ago on the Stack Overflow blog, David Robinson showed that Python has been growing dramatically, and it is now the top language that people view questions about on Stack Overflow. Even in the most pessimistic forecast, it will far outgrow the other languages this year. 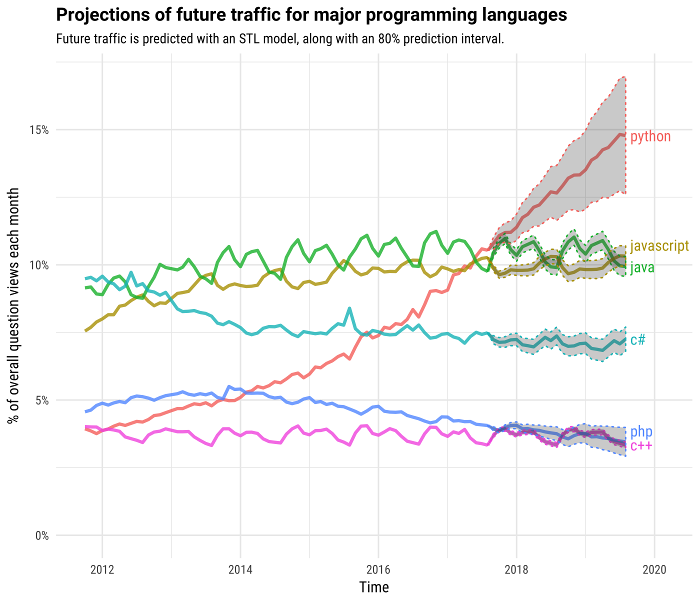 If you are a Python expert, then the line surging up and to the right is good news for you. It does not represent competition, but confirmation. As more new programmers learn Python, our expertise becomes ever more valuable, and we will see that reflected in our salaries, our job opportunities, and our job security.

But there is a danger. There are soon to be more new Python programmers than ever before. To sustain this growth, we must welcome them, and we are not always a welcoming bunch.

The trouble with Stack Overflow

I searched Stack Overflow for rude answers to beginners' questions, and they were not hard to find. 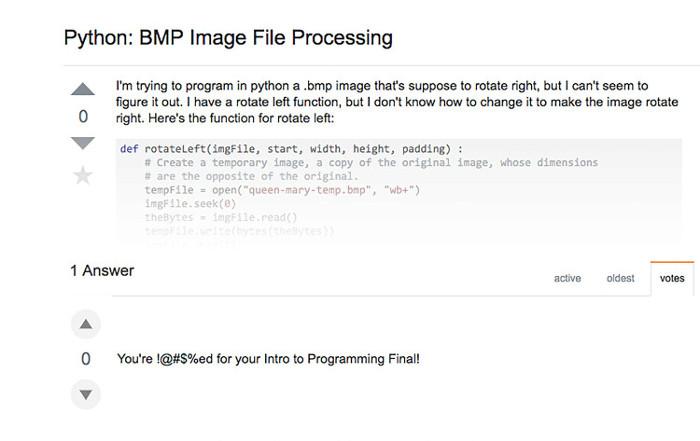 The message is plain: If you are asking a question this stupid, you are doomed. Get out.

I immediately found another example of bad behavior: 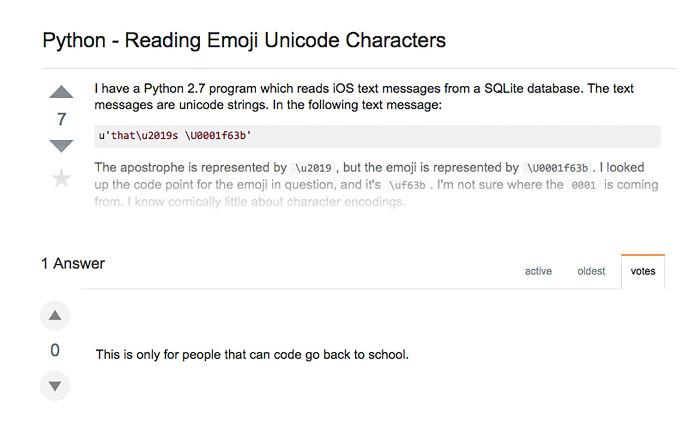 Who has never been confused by Unicode in Python? Yet the message is clear: You do not belong here. Get out.

Do you remember how it felt when you needed help and someone insulted you? It feels terrible. And it decimates the community. Some of our best experts leave every day because they see us treating each other this way. Maybe they still program Python, but they are no longer participating in conversations online. This cruelty drives away newcomers, too, particularly members of groups underrepresented in tech who might not be confident they belong. People who could have become the great Python programmers of the next generation, but if they ask a question and somebody is cruel to them, they leave.

This is not in our interest. It hurts our community, and it makes our skills less valuable because we drive people out. So, why do we act against our own interests?

Why generosity turns to rage

There are a few scenarios that really push my buttons. One is when I act generously but don't get the acknowledgment I expect. (I am not the only person with this resentment: This is probably why Drunk Santa snapped when he gave a $5 bill to a homeless man and did not receive any thanks.)

Another is when answering requires more effort than I expect. An example is when my colleague asked a question on Slack and followed-up with, "What's the ticket number?" I had judged how long it would take to help him, and when he asked for more help, I lost my temper.

These scenarios boil down to one problem: I have expectations for how things are going to go, and when those expectations are violated, I get angry.

I've been studying Buddhism for years, so my understanding of this topic is based in Buddhism. I like to think that the Buddha discussed the problem of expectations in his first tech talk when, in his mid-30s, he experienced a breakthrough after years of meditation and convened a small conference to discuss his findings. He had not rented a venue, so he sat under a tree. The attendees were a handful of meditators the Buddha had met during his wanderings in northern India. The Buddha explained that he had discovered four truths:

I still get angry at people on the internet. It happened to me recently, when someone posted a comment on a video I published about Python co-routines. It had taken me months of research and preparation to create this video, and then a newcomer commented, "I want to master python what should I do." 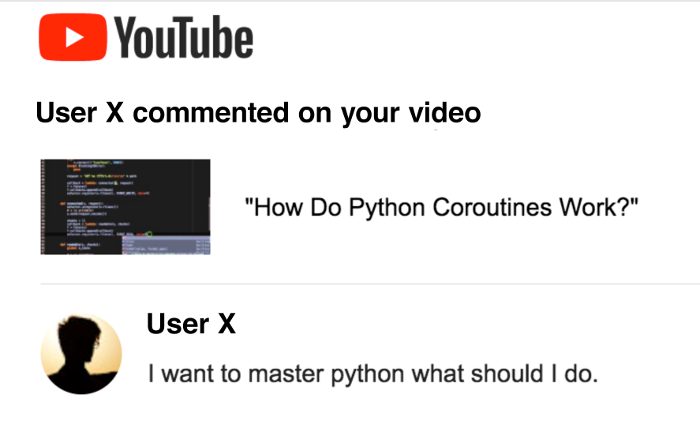 This infuriated me. My first impulse was to be sarcastic, "For starters, maybe you could spell Python with a capital P and end a question with a question mark." Fortunately, I recognized my anger before I acted on it, and closed the tab instead. Sometimes liberation is just a Command+W away.

What to do about it

If you joined a community with the intent to be helpful but on occasion find yourself flying into a rage, I have a method to prevent this. For me, it is the step when I ask myself, "Am I angry?" Knowing is most of the battle. Online, however, we can lose track of our emotions. It is well-established that one reason we are cruel on the internet is because, without seeing or hearing the other person, our natural empathy is not activated. But the other problem with the internet is that, when we use computers, we lose awareness of our bodies. I can be angry and type a sarcastic message without even knowing I am angry. I do not feel my heart pound and my neck grow tense. So, the most important step is to ask myself, "How do I feel?"

If I am too angry to answer, I can usually walk away. As Thumper learned in Bambi, "If you can't say something nice, don't say nothing at all."

Helping a newcomer is its own reward, whether you receive thanks or not. But it does not hurt to treat yourself to a glass of whiskey or a chocolate, or just a sigh of satisfaction after your good deed.

But besides our personal rewards, the payoff for the Python community is immense. We keep the line surging up and to the right. Python continues growing, and that makes our own skills more valuable. We welcome new members, people who might not be sure they belong with us, by reassuring them that there is no such thing as a stupid question. We use Python to create an inclusive and diverse community around writing code. And besides, it simply feels good to be part of a community where people treat each other with respect. It is the kind of community that I want to be a member of.

There is one idea I hope you remember from this article: To control our behavior online, we must occasionally pause and notice our feelings. I invite you, if you so choose, to repeat the following vow out loud:

before I answer a question online.

This article is based on a talk, Why Generosity Turns To Rage, and What To Do About It, that Jesse gave at PyTennessee in February. For more insight for Python developers, attend PyCon 2018, May 9-17 in Cleveland, Ohio. 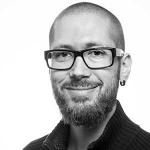