Why the patent system doesn't play well with software: If Eolas went the other way

Everyone take a deep breath: it seems we've had a moment of sanity in the patent wars. Last week, a jury invalidated the dangerous Eolas patents, which their owner claimed covered, well, essentially the whole Internet. The patents were originally granted for an invention that helped doctors to view images of embryos over the early web. A few years later, smelling quick cash, their owner insisted that it had a veto right on any mechanism used to embed an object in a web document. Really? The patents are obvious—both now in 2012 and back in 1994, when the first one was filed. Thankfully, a jury realized that and did what should have happened years ago: it invalidated these dangerous patents.

That's the good news. The bad news: it came after the patents already caused plenty of damage. Companies large and small have taken licenses from Eolas rather than pay millions to fight in court. Many, such as Tim Berners-Lee (who testified during trial), warned about the dangers of the Eolas patents:

The existence of the patent and associated licensing demands compels many developers of Web browsers, Web pages, and many other important components of the Web to deviate from the fundamental technical standards that enable the Web to function as a coherent system.

We couldn't agree more, but let's go a step further. What the Eolas patents make clear is that the system isn't working. We've been saying it for years, yet both Congress and the courts have failed to fix the problem. In the now infamous Bilski case, the Supreme Court gave the green light to business method patents, and, consequently, to software patents. But the patent system, which is largely a one-size-fits-all program, simply stops making sense when we start to talk about software.

"Software patents" should be an oxymoron

In order to understand why software patents don't make sense, you have to understand a little bit about the patent system. The Constitution gives Congress the power

To promote the Progress of Science and useful Arts, by securing for limited Times to Authors and Inventors the exclusive Right to their respective Writings and Discoveries.

This single sentence represents an important bargain: when someone invents a novel invention, the government grants the inventor a 20-year monopoly to exploit that invention. At the end of those 20 years, the inventor dedicates that invention to society, allowing others to practice it and build upon it. Traditionally, this monopoly was intended to provide an important incentive, especially where, as with pharmaceuticals, companies have to build factories and laboratories, hire workers, and endure rounds of testing at the FDA before they can sell a drug.

Software often does not require that kind of investment—often all you need is a coder and a computer. Even complex programs don't require 20 years of exclusivity to recoup their investment. We've also seen time and again that software developers don't need patent incentives to create new and great programs. Take, for example, companies like Google and Twitter; neither relied on software patents to grow its early business.

It's also clear that 20 years is too long to protect software inventions. Many who obtain patents—those who may feel obligated to appease venture capitalists or who get patents for defensive purposes, for example—quickly learn that technology moves so quickly that it's often been replaced or vastly improved upon by the time the patent is granted. And it's expensive to get an application through the patent office—costs and fees for "complex software" can range well into the $10,000s! So what do you think happens when a company spends all that money getting a patent and then finds out its product is no longer popular? Enter the patent troll, who buys the antiquated patent and starts suing (more on that below).

Further, software is fundamentally situated as a building block technology. You write some code, and then I improve upon it (the open source folks already have this figured out). But if your code is covered by a 20-year patent, I can't even test my improvements until that patent expires.

Software patents are nearly five times as likely to be litigated as other patents. In fact, lawsuits surrounding software patents have more than tripled since 1999. What does that mean? It means that if you do business in America, and it involves any even arguably patented software, you'd better have a serious legal budget. Take, for instance, Spotify, the popular music streaming service that came to the States in late 2011. A few weeks after it launched—boom!—Spotify is facing a patent lawsuit (the kind of suit that will easily cost each side millions of dollars). Not only is this bad for U.S. businesses, but it drives innovators out of the country, which is bad for all of us, not least of all because it sends jobs abroad. Increasingly, patents serve as a dangerous tax on innovation in America, especially when it comes to software. And domestically this means that instead of helping grow R&D or engineering departments at software companies, software patents increasingly help grow legal departments.

So what do you do if you're a small inventor, working in your free time on coding new software, and all of a sudden you're threatened with a patent suit? Unfortunately, time and again, we hear of folks closing up shop. When part-time inventors without financial backing or tinkerers in their free time stop inventing the next Facebook or tomorrow's Twitter, we're all worse off. And right now, that's the threat software patents pose.

Now, back to Eolas. What would have happened if the jury went the other way? Virtually every website that allows embedded objects, such as images or video, for example, (in other words, nearly every website) would have to pay up. Sadly, this is the norm and not the exception. The jury in this case got the information it needed, but not every defendant can afford to fight, much less inspire Sir Berners-Lee to testify. Dangerous, overbroad software patents have become a tax on innovation that cannot stand. Software patents are harming innovation and our economy. It's time to rethink our policies.

The Electronic Frontier Foundation is committed to defending innovation and fixing the problems with software patents in the long-term. That's why we at the EFF will soon be launching our new campaign around software patents, Patent Fail: In Defense of Innovation. Stay tuned.

What to read next
Tags
Law
Patents
Julie Samuels 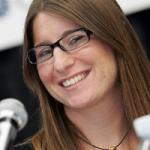 Julie Samuels is a Staff Attorney at EFF, where she focuses on intellectual property issues. Before joining EFF, Julie litigated IP and entertainment cases in Chicago at Loeb & Loeb and Sonnenschein Nath & Rosenthal. Prior to becoming a lawyer, Julie spent time as a legislative assistant at the Media Coalition in New York and as an assistant editor at the National Journal Group in D.C.
More about me