FOSS to save endangered languages around the world

Can the FOSS community save 197 endangered Indian languages?

On Jan 21, 2008, Marie Smith Jones died. Her death was not just a loss of one human being, she was the last speaker of the Eyak language.

Eyak was spoken in southern, central Alaska. We permanently lost one color from the mosaic of our limited linguistic diversity. With a language, not only a language dies, but with it a part of a community's history, intellectual and cultural diversity, and cultural identity.

In India, the situation is not different. I searched the Language Atlas of UNESCO and found out that 197 Indian languages are endangered, 2471 total languages worldwide. One of these endangered languages is from the region from where I originally belong: Bihar, a state of India. I work in the free and open source software (FOSS) field, focused on localization. The language I do my work in is Hindi. I've also worked in Maithili, an Indian language, mentoring the community and help develop several applications in it, including Fedora, GNOME, KDE , and Firefox. 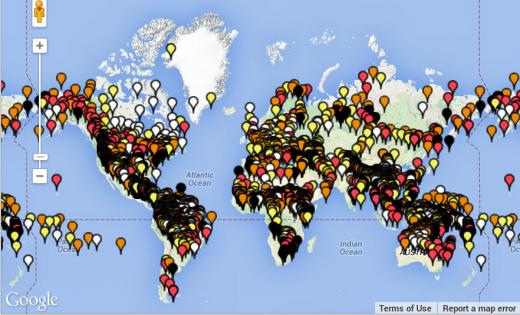 This work gave me a sense of satisfaction as well as courage to work on efforts to save and proliferate endangered languages. At one point, I decided that working with the Angika language and establishing it on FOSS platforms would be an important endeveour, for the world, and for the Angika language community.

The Language Atlas of UNESCO, describes the Angika language as being in a 'vulnerable' condition. It is spoken in the state of Bihar, also in Jharkhand and some parts of Nepal. With the help of a local publisher, I organized a seminar titled, Viśva bhāṣā mānacitra para aṅgikā" (Angika on World Language Map), in June 2013. Several writers, poets, linguists, and journalists were present. Though some understood, most were unawere that Angika is a dying language!

The seminar was a success. The press of Bihar covered it. Attendeees wanted to make Angika an available language on operating systems. And, which community of technical folks came forward to help this dying language? Of course FOSS! The first thing to do was to ensure that Angika is available on The GNU C Library, or glibc. So, the first challenge was to create a locale for Angika (anp_IN). I filed a bug: New Language Locale : Angika (anp). With the help of community, and an Angika linguist, I created the locale. The bug was successfully fixed and resolved within a week.

This is the power of FOSS. There are 6000 languages in the world, and my hope is that we could have 6000 locales in glibc to relfect that. I believe if our community works together, this dream could be realized.

To begin localization, you will need a few things information on terminology. A great resource for this is the FUEL Project. For Angika, the draft terminology proposed by the community is at FUEL on its Zanata instance. I requested new team registration for the Angika language on Firefox and Fedora. Now work has begun for Firefox. Also, the plural rules bug for Angika (anp) is under process at CLDR.

This all is being done under a small group called Bhasha Ghar. A dying language on the Language Atlas of UNESCO is now live on a FOSS platform. It is my experience that saving one color from the mosaic of our limited linguistic diversity is not too hard to do, especially for the FOSS community!

If I forget my native speech,

And the songs that my people sing

What use are my eyes and ears?

What use is my mouth?

If I forget the smell of the earth

And do not serve it well

What use are my hands?

Why am I living in the world?

How can I believe the foolish idea

That my language is weak and poor

If my mother's last words

Rajesh Ranjan - Rajesh Ranjan, a language enthusiast - a social entrepreneur who loves to contribute in the FOSS world. He loves the way open source works. He likes the word 'community'. He respects voluntarism. He is associated with multiple projects and contribute mostly related to language computing. Also, he is a trained journalist and professional localizer.Currently, Rajesh Ranjan is working as Open Source Community Manager, NeGD. He worked as language...
More about me

Why it's essential to grow Indian-language Wikipedias

8 features multilingual organizations should look for in a CMS

While not for one second denigrating what is clearly an exceptionally worthwhile project, it does nothing (that I can see) about the spoken language.

Rajesh Ranjan on 17 Jul 2014 Permalink
Thanks ! Which project you are talking? A small group is associated with enabling Angika language (a dying language ) on foss. The article is just to showcase a story and pain of dying languages and how one can help any such language by enabling l10n on foss platform.

There are two ways for a language to disappear. One is by force, such as one country or (other) being taken over by another country, and the other method of loss is by assimulation.

The latter is a peaceful one, and remnants of the culture of the extinct language will persist.

Rajesh Ranjan on 17 Jul 2014 Permalink
Thanks leslie! Every two weeks, One language dies, c.3000 languages will die in 100 next years! The data is painful! The reason for dying a language can be anything. If there is just one-two people, then just an influenza can be a cause also! Whatever reason you name but at the end "clay is cold and hard and silent" for us, no response. eg. Linear_A and Harappan Script we cannot decipher now so now we will be deprived forever what treasure are inside these languages.

I disagree Leslie. A digital presence is important on many levels - it's just like signage on roads etc where there's a proven impact on perception and even usage. Admittedly it's under-researched but I'd say for one thing, a digital presence enhances status (esp if the language is seen as 'old fashioned/backward/rural/oral only'), improves usability (e.g. through proofing tools in a suite like LibreOffice or predictive texting), helps disseminate new terminology, and, I would argue, actually impacts language use (something I wish would get more research). I recently actually drafted a position paper on the topic, in case you're curious: http://www.igaidhlig.net/en/why-bother/

Subhashish Panigrahi on 23 Oct 2014 Permalink
Brilliant article Rajeshji, I read it once before and read it today again. I am not sure if it is only FOSS community, bu the native speaker community has to be awaken the very hour otherwise there will be a silent a sad death of a language.