OVC evolution, a snapshot of a student HFOSS work-in-progress | Opensource.com

OVC evolution, a snapshot of a student HFOSS work-in-progress

Three Rochester Institute of Technology (RIT) students recently gained recognition for a Humanitarian Free and Open Source (HFOSS) proof-of-concept project, Open Video Chat (OVC).  OVC put a functional video chat program written designed for deaf students on to the OLPC XO 1.5 computer. This is the story of how it got started and where it can go from here.

By the first anniversary of my teaching an honors seminar in FOSS and educational game development, thanks to student interest and RIT's applied focus and co-op program, we had developed a scrappy, unfunded open source community within the school, housed it in RIT's Center for Student Innovation, and built the FOSS@RIT campaign.

As a result of all of this activity and visibility, we were approached by The National Technical Institute for the Deaf (NTID), a college where I began my career at RIT, about the possibility of developing video chat software for the OLPC as part of a new effort they were pursuing in K-12 education on the Pacific Rim.

There had been a beta video chat program developed for the XO 1.0, but it delivered just a few frames per second of video, making it essentially useless (or at least extremely frustrating) for use as a sign communication tool. In an ideal world a video chat program would deliver at least 15 fps for signed communication to be comfortable and comprehensible. Ideally it would allow the user to bias the delivery for high video frame rate (most video codecs are biased to audio and given a low bandwidth transmission will degrade the video frame rate in favor of maintaining clear audio). Last it would provide a text chat window as a backup for use in cases where bandwidth issues were degrading video performance to a level where signed communication was frustrating. It seemed to us that the faster processor, increased RAM, and better camera in the 1.5 hardware release could possibly make the grade.

NTID funded three student co-ops--Justin Lewis, Fran Rogers and Taylor Rose--to do the initial proof of concept. After some false starts and by pushing the hardware, they were able to create a functional prototype, do some user testing on RIT's campus, and roll out their first release at NTID's 2010 International Symposium on Technology Education, presenting a paper and showing it at a demo table in the symposium's exhibits area. 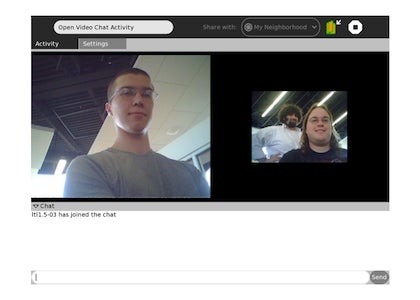 The students received a summer research fellowship to continue development of the prototype, but were limited by what they could do by the version of Fedora the XOs were running at the time, which prevented them from working with up-to-date versions of  Telepathy, Farsight, and Gstreamer, which would have allowed a more integrated approach. Recently OLPC has updated to a maintained version of Fedora, a Red Hat-sponsored and community-supported open source distribution, which will allow future developers to take OVC to the next level.

While NTID's pilot program has moved away from using the OLPC (due to their funder's reluctance to support OLPC's child ownership model), FOSS@RIT considers OVC to be an important project worth continued development. While our next Humanitarian Free and Open Source Software Development course will not be offered until September, we welcome the FOSS community at large to get involved in OVC's development.

Stephen Jacobs - Stephen Jacobs is the Director of Open@RIT, the university's Open Programs Office. http://www.rit.edu/research/open. He is also a Professor in the Department of Interactive Games and Media at the Rochester Institute of Technology and a Scholar-in-Residence at the The Strong National Museum of Play.
More about me