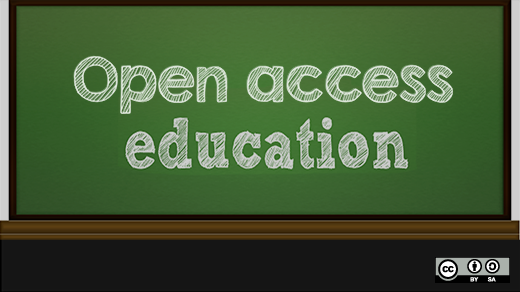 Charlie Reisinger from the Penn Manor School District talked to us next about open source at his school. This talk was an expanded version of his lightning talk from the previous night.

Penn Manor has nine IT team members which is a very lean staff for 4500 devices. They also do a lot of their technology in house. But, before we talk about open source, Charlie took a tangent into the nature of education today. He says that school districts are so stuck on the model they’re using and have used for centuries, but today kids can learn anything they would like with a simple connection to the Internet. You can be connected to the most brilliant minds that you’d like, so teachers are no longer the fountains of all knowledge. A glaring gap in this evolution is that the classroom hasn’t been transformed by technology; if you walked into a classroom 60 years ago, it would look pretty much like a classroom today.

Schools that do allow students to have laptops, lock them down. This is a terrible model for student inquiry, and the reason most of us are here [working in open source] today is because we had a system growing up that we could get into and try to break, fix, and hack.

Doing everything with open source

So, what is Penn Manor doing differently? First, they’re doing everything with open source. They use Koha, Moodle, Linux, WordPress, Ubuntu, OwnCloud, SIPfoundry, and VirtualBox.

This came to them partially out of fiscal necessity. When Apple discontinued the white Macbook, the school was stuck in a situation where they needed to replace these laptops with some sort of affordable device. Using data they collected from the students laptops, they found that students spent most of their time on their laptops in the browser or in a Word Processor, so they decided to install Linux on laptops. Ubuntu was the choice because the state-level testing would work on that operating system. This worked at the elementary, but they needed to scale it up to the high schools, which was much harder because each course needed different/specific software. They needed to decide if they could provide a laptop for every student.

The real guiding force in deciding to provide one laptop per student was the English department. They said that they needed the best writing device that could be given to them. This knocked out the possibility of giving tablets to all students; instead a laptop was needed. Not only did they give all students laptops with Linux installed, they gave them all root access! This required trust! They created policies and told the students they trusted them to use the laptops as responsible learners.

Charlie has had zero discipline issues associated with the students having root access on their laptops.

And, if a student screws up their computer, it isn’t such a bad thing because now they have to learn to fix their mistake.

This began as a pilot program for 90 of their online students before deploying to all 1,700 students. These computers include not just productivity software, but Steam! That got the kids attention. When they deployed to everyone though, Steam had to come off the laptops—but the kids knew it was possible, so it forced them to figure out how to install it on Linux, which is not always self explanatory. This prodded the kids into learning.

Charlie mentions that he probably couldn’t have done this 5 years ago because the apps that are available today are so dense and so rich.

There was also the issue of training the staff on the change in software, but also in having all the kids with laptops. This included some training of the parents as well.

Along with the program they created a help desk program as a 4 credit, honors level course, as independent study for the high school students. They spent the whole time supporting the one to one program (one laptop per student). These students helped with the unpacking, inventorying, and the imaging (github.com/pennmanor/FLDT built by one of the students) of the laptops over 2 days.

The key to the program is that the students are treated as equals. Charlie’s favorite moment has been watching his students train their peers on how to use these laptops.

This article was originally posted on Nicole's blog What I Learned Today as ATO2014: Lessons from Open Source Schoolhouse. Reposted via Creative Commons.

The program was covered on Linux.com and previously on Opensource.com.

Join the discussion on HackerNews.