The role of open source in emerging economies: A Malaysian success story | Opensource.com

The role of open source in emerging economies: A Malaysian success story

2010 has been a fantastic year for open source. The progress that Malaysia has made with open source has caught the attention of governments of developed and emerging economies. I would like to share some of the opportunities, challenges, and future benefits that open source can continue to offer to economies such as Malaysia.

One of the things that I’ve been starting to study is the Brazil, Russia, India, and China (BRIC) thesis. In 2000, Goldman Sachs published a report that highlighted the characteristics of these four countries. They found that given their substantial population and land mass, these countries would not only become the dominant economies by 2035, but by 2050, they would be the most important economies in the world—if they’re able to successfully execute a global economic strategy.

How could these developing nations leapfrog strong existing economic blocs such as the US and Europe? The answer lies in the widespread adoption and integration of technology as part of the country’s economic development.

Take Brazil, for example. Last year, President Lula was honored by the ITU in Geneva for the country’s success in crossing the digital divide by bringing not just technology, but government services and economic potential into its rural and impoverished areas. This success has caught the attention of many governments, including the US.

There are three main reasons why governments are interested in adopting open source technology:

1. They find that open source software helps improve national sovereignty, which is a very important goal for helping the government to do its job.

In relation to this, I have been following for a number of years the extraordinary goal of achieving 100% participation from governmental agencies adopting open source. In Asia, Malaysia stands out with a success rate of well over 90%. I strongly feel that this should be a point of pride for Malaysia. In fact, it is being talked about by Brazil, India, and the US governments as a remarkable success story.

The Malaysian government clearly exemplifies the role of a forward-thinking government leveraging technology. It has taken great efforts to educate its internal stakeholders on the benefits of open source technology. As a result, during the 2010 MyGOSSCON event, Malaysia’s 36-Hour OSS WebDev Contest, receiving twice the numbers of entries from the previous year, was so successful that it made the Malaysia Book of Records. In addition, a whopping 92 submissions from both Public Sector and Public Institutes of Higher Learning (IPTA) were received for the Public Sector OSS Case Study Awards. This was nearly triple the number received in 2009.

But perhaps the best glimpse into the future of Malaysia’s economy is this—85 teams made up of secondary schools students applied to compete in the OpenOffice.org Competition. I am delighted to see the level of interest that is gaining traction among Malaysia’s next generation of open source programmers.

Today, open source has over one billion lines of source code, with an estimated one million and more developers actively engaged with the coding process. One of the questions that I am often asked is, "What good am I in such a large world?" The Resonate pendulum is a great metaphor as an answer to that question. This giant pendulum weighs 350 pounds and can only move if given tiny tugs with weakly attached magnets on strings. However, a big swing can result if the tugs are timed with the swing of the pendulum. The Resonate pendulum demonstrates the power of resonance to harness and collect energy.

This is a wonderful way of explaining our open source community and the rationale for a continuous release cycle for projects like Fedora, which collect the energy of thousands of people, making changes that each one of them may think is incredibly small. But when you add it all up, it becomes increasingly powerful.

I want to leave you with this idea that there are a lot of big opportunities from an economic development perspective. It is remarkable that some of the poorest economies in the world 20 years ago can be predicted to be the leaders of the economic world from now. As such, open source and open standards provide a more attractive future for countries putting together their 21st century strategy. 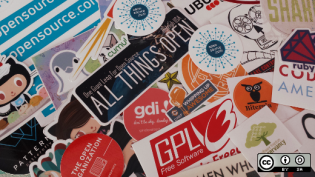 Good observations. I would suggest another reason F/OSS plays a strong role in developing economies is that as they automate and computerize, they need not ship hard currency out of the economy so to do. Many G7 economies organize foreign subsidiaries to leave a minimal tax foot print, which means to buy from the big (typically US) firms means importing the tech, i.e. shipping money out of the system.

If you haven't read it or watched the videos, check out Steve Blank's <a href="http://steveblank.com/category/secret-history-of-silicon-valley/">“Secret History Series.”</a> Sustained demand from the public sector (in the case of the USA, the military-industrial complex in WWII and the Cold War) is what built the US IT industry as we know it (and even IBM's first big sale was the US Census, if you want to go further back.)

I feel Brazil really leads in OSS adoption because it has jumped from being just a consumer to contributing code to the community. On its portal, http://softwarepublico.gov.br/ the Brazilian Government has started sharing e-gov applications with other countries and within Brazil itself. I hope more countries around the world, make the transition from using to sharing!