The theme that emerged from the first CityCamp Honolulu, held on December 3 (the 17th CityCamp held worldwide), was restoring citizen confidence in their government. In a very collaborative and participatory atmosphere, organizers looked to citizens to generate ideas for the City of Honolulu's upcoming Code for America project and to harness the power of design thinking to rapidly prototype ten topics generated during the unconference.

Forest Frizzell, also an organizer for the CityCamp, shared a timeline that highlighted initiatives that have already happened, such as Can Do Honolulu, an online portal for citizens. The timeline then showed theCityCamp event and a 24-hour hackathon scheduled for January 2012.  The momentum from these events will feed the Code for America kickoff in February 2012 and an anticipated Open 311 project also in 2012.

Bruce talked about the vision to create a smarter citizen. He said if government IT can present a clear vision that improves services, saves money, and manages IT costs, the results will lead to engaged citizens who participate in their government.

Bruce also touched on the Office of Information Practices open data policy. If they get a request for open data, they produce the data set and open it to the public. "If media X comes in and asks for data, instead of just giving it to the media, we're going to give it to the public. We'll get it on the Can Do site," Bruce stated.

"It's a real change in how we think and how we do things," he said. It's this type of shift in mentality that is making real progress in open government. More IT departments should take note and look to establish similar policies to provide open data to citizens in this manner.

After the panel, attendees transitioned into unconference mode. Voting for the day's sessions concluded, and the first five sessions were announced. Participants moved to the breakout rooms and started to collaborate on their chosen topics. I attended and participated in a session about S.W.E.E.T.S.: Surf, Weather, Emergencies, Events, Traffic, and Services. The idea was to create one platform that brings all of the city and county departments together. It would leverage real-time, location-based data to keep citizens informed on what's happening right now.

After a short lunch break, the second panel of the day provided perspectives from outside of Hawaii. I joined the panel with Alissa Black, Government Relations Director at Code for America and Steve Bretches, a consultant at IBM. Our goal was to provide insight to the audience from what we're seeing around the rest of North America and beyond.

Black highlighted Code for America projects like Change By Us, Classtalk, and Where's My School Bus.  Bretches helped to draw comparisons between technology and the people who use it. "It's not about technology, it's about the cooperation with the government, community, and businesses," claimed Bretches.

I added lessons we could learn from the open source world, such as creating a participatory and inviting environment that would lead to a culture of transparency and accountability. I also provided examples of what's happening at other CityCamps. In Colorado, they are looking to advance adoption of the Open Government Directive. In Raleigh, we are continuing the CityCamp movement with quarterly meetups and project follow-up.

The second round of sessions started. I jumped in and moderated a session on making the City of Honolulu's budget more transparent. The participants and I made an outline of what is currently available from the city and drafted action steps to explore how an open budget would be citizen-friendly by prototyping several use cases and scenarios.

The final charge for the day was to begin prototyping the top ten ideas that had been generated. The organizers prepared a brief introduction by showing a video from NYU Wagner on design thinking for public policy and social impact. Participants then broke into ten different groups began to rapid prototype the ideas from the day that included: 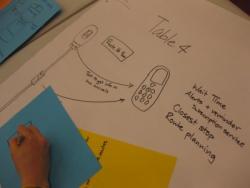 Each team drilled down into its topic. Some came up with action plans; others developed design mock-ups. All the teams shared their prototypes by presenting to the larger group.

CityCamp Honolulu was a huge success. Frizzell reacted at the end of the day, "I'm overwhelmed. I can't believe how many people showed. Today was a huge success. We got a ton of ideas that we could act on—that we could develop in-house or in partnership with the local development community. Citycamp was so useful, and we inspired a lot of people."

I was inspired by the attendees, ideas, and the participants at CityCamp Honolulu. And I'm pretty sure I wasn't the only one. In closing, organizer Frizzell charged CityCampers with a mission. He challenged the community to help transition the CityCamp event from an emotional movement into a reality. "How do we inspire people to become involved?" he asked.

What can a CityCamp can do for your community? As Frizzell pointed out, it's a movement that can engage your local community. I'll add that CityCamp can restore trust in government. The activities and projects from the CityCamp movement are re-engaging citizens who think they don't have a voice in government. It's giving people a reason to participate and not just the latest hot topic of debate.