On April 15, NASA concluded the first year of its Open Government Initiative by releasing a status report on 150 milestones of 19 open government projects and three flagship initiatives.

"NASA continues to innovate on its approach to open government," said Nick Skytland of NASA's Open Government Initiative. "Our commitment to experimenting with and embracing new participatory ways of collaboration begins with our efforts to infuse open government into the U.S. space program."

The three flagship initiatives are around policy, technology, and culture:

Throughout the report, each milestone's title also notes which of the goals it works towards: transparency, collaboration, and participation. Following are just a few of the updated projects:

Freedom of Information Act (FOIA) requests are how anyone in the public can have specific requests for information from the government answered. NASA reports that its policy is to review what it can release, not what it can withhold, i.e., a policy slanted to openness. Its FOIA goals in the Open Government Plan include ensuring the website is updated with any document that has been requested more than three times, providing web access for status checks on requests, and decreasing their FOIA backlog.

Their three-month goals are complete, but the six-month goal of web-based status checks is still listed as "In Progress."

Also in the category of information sharing, NASA has a goal of declassifying materials to increase transparency and accountability. This is one of the goals they're furthest behind on--even the three-month goals are marked as "In Progress." Ultimately the objective is to review historically valuable information to declassify as much as possible without harming security concerns.

Under President Clinton's 1995 order establishing a system for declassifying information older than 25 years, NASA reviewed more than eight million documents and declassified five million of them. President Obama has updated the requirements of this program.

NASA has been online since its first websites in the early 90s and has steadily increased its visibility online ever since. In 2009, its website had 4.4 billion page views, accounting for 1.8 petabytes of content delivered and 21,231 days spent on the site by visitors.

There are now dozens of employee blogs, NASA chats, and NASA TV, which is one of the top ranked YouTube channels. They have 369,000 Facebook followers and nearly a million on Twitter. And those are just the primary NASA social media accounts. Twenty astronauts and hundreds of other NASA employees tweet on personal accounts. They've also taken it offline, organizing tweetups at NASA facilities with the agency's experts.

The agency's open government goals for using the web for public communication and transparency include deploying a Flash-based, on-demand video player, a social media policy, and more streamlined web initiatives.

The General Services Administration (GSA) launched the IdeaScale platform in February 2010 for 22 federal agencies to use to collaborate with the public. The site invites anyone to submit, comment on, and rank ideas for how NASA can become more transparent, participatory, collaborative, and innovative. Through March 2010, the site has gathered 1,271 users, 453 ideas, and 8.097 votes--the most out of any of those 22 agencies.

Of the ideas submitted, 28% were valid possibilities. Fourteen percent had been done already, and the most of the rest were either infeasible due to regulations or not within NASA's scope of authority. To their credit, NASA attempted to contact the people who submitted those ideas to help change them into actionable items.

The first idea to be implemented is familiar to the open source community--a NASA-sponsored barcamp. The San Diego Space Society was already in progress towards a SpaceUp, a space-themed barcamp. NASA quickly got involved as a sponsor and sent representatives.

Remaining financially and logistically feasibly ideas were tagged with a topic area and will be delivered to the appropriate office.

Read the report and offer your ideas

You can review the status of various milestones on NASA's status dashboard. Contribute questions, comments, and ideas for improving the NASA Open Government Plan through IdeaScale.

NASA's Open Government Plan has been recognized with two Leading Practices Awards from the White House for achievement above and beyond the requirements of the Open Government Directive in the categories of "Participation and Collaboration" and "Flagship Initiatives." 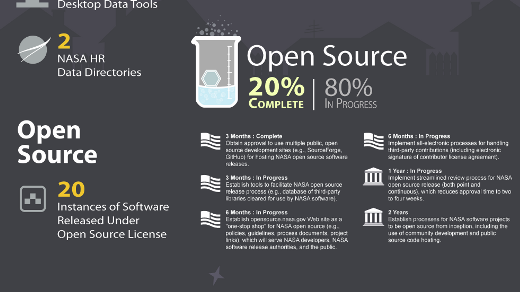 What to read next
Tags
Government
Science
Ruth Suehle