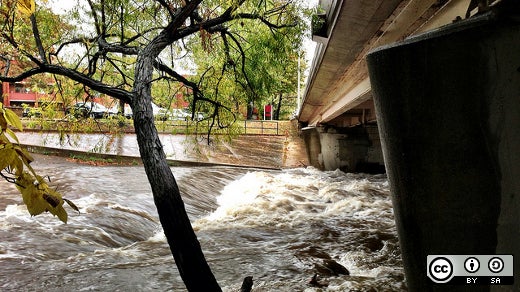 The 9-1-1 system is overwhelmed with real emergencies during weather events like Hurricane Sandy, so if you want to report a downed tree, power outage, or clogged storm drain, you need another way to do so—SeeClickFix provides that forum.

Of all the media surrounding Hurricane Sandy, aka Frankenstorm, one email caught my attention. The subject was: "Use SeeClickFix to Help Your Community During Hurricane Sandy." What a great idea. The whole point of SeeClickFix is to report non-emergency issues to local authorities in a transparent forum so that other citizens can view the reported issues.

SeeClickFix told opensource.com that over 800 issues were reported on the East Coast within the last 24 hours (as of 1:00 PM ET on Tuesday, October 30). Here's what else they had to say about how citizens have been using SeeClickFix before, during, and after the storm.

In communities affected by the storm, having access to crowd-sourced, realtime information is critical for the safety of citizens. Before the storm, people were using SeeClickFix as a preparatory measure, to draw attention to problems that could worsen the pending impact. In particular, the most common report was for clogged storm drains, which significantly increase the likelihood of flooding. After the storm, people are using SeeClickFix to report the precise location of power outages, flooding, downed trees, downed electric lines, and other storm damage.

Citizens are heeding requests from emergenecy management officials to report their non-emergency issues to SeeClickFix. They are using the platform to engage with neighbors and help those in need by viewing posts for necessities like batteries, water, and flashlights.

SeeClickFix has once again proven itself as an invaluable tool for communities during severe weather events. As 9-1-1 call centers all over the Northeast were overwhelmed with calls yesterday during the peak hours of the hurricane, governments and fire departments were actively pleading with residents to use that service only in the case of a true emergency.

And these reports can be made from our website, mobile website, map widgets on media partner websites, and most importantly, via our iPhone and Android apps.

It's apparent that SeeClickFix provides an important alternative to 9-1-1 centers and other emergency services. Because issues are posted transparently in the system, neighbors can see what’s happening in their local area. Then, they are able to lend a hand or items if they can and report new issues they see.