The drive to open data provides opportunities for tech community

The open source movement can trace its beginnings to a famous strategy session held in Palo Alto, CA in February 1998, where the term "open source" was coined. That meeting led to the Open Source Definition, to advocacy for the use of open source software, and, fairly quickly, to worldwide recognition of open source principles.

Almost exactly a decade later, in October 2007, another California conference—this time in Sebastopol—launched the current open data movement. It was led by Carl Malamud and Tim O'Reilly, funded by the Sunlight Foundation, and drew on work done by the Open Knowledge Foundation and others. Largely inspired by open source, the conference developed a set of principles for opening up government data for public use. As the Open Source Definition had done, those principles became the basis for advocacy and for promoting the goals of open data.

Now the open data movement is hitting stride, and 2014 may shape up to be "the year of open data," as one blogger has called it. Last May, the Obama administration released a new open data policy calling for federal data to be made open by default—and embracing principles very similar to those that came out of the 2007 conference. The Open Government Partnership, an international collaboration to make more government data available, now has about sixty members. And last month, the White House held back-to-back "datapaloozas" to encourage startups and other businesses to use federal datasets on safety and on education. 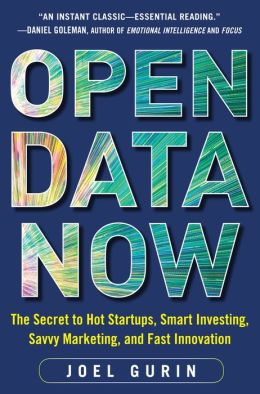 I've studied and participated in the open data movement for more than two years, and have written the book Open Data Now, just published, as the first in-depth guide to this new field.  I've described open data as accessible public data that people, companies, and organizations can use to launch new ventures, analyze patterns and trends, make data-driven decisions, and solve complex problems. It's turning out to have major implications for good government, business innovation, consumer advocacy, and more.

The open data movement began with government accountability and transparency. Advocates have argued that data on spending, contracting, and other government activities should be available in machine-readable formats for public review and analysis. The DATA Act, which recently passed the House with only one dissenting vote, is a bipartisan effort to "open up" spending data in a much more effective way than has been done so far.

But increasingly, open data is also turning out to be a major business resource. Startup and established companies are using data on weather, healthcare, finance, energy, education, and more to build their businesses. Kayak, Zillow, and the Climate Corporation, which use open data in different ways, have recently been acquired for a billion dollars or more. When President Obama announced his new open data policy, he predicted that open data is "going to help launch more start-ups. It's going to help launch more businesses… It's going to help more entrepreneurs come up with products and services that we haven't even imagined yet."

The drive to open data will provide great opportunities for the tech community. Developers can expect that more and more government data will be made available with APIs that encourage its use. In addition to federal data, state and local data is becoming increasingly available, with cities like New York, Washington, Chicago, and San Francisco leading the way. These datasets can fuel anything from focused smartphone apps to substantial new ventures.

At the GovLab at New York University, where I now serve as senior advisor, I'm directing the Open Data 500 project—an effort, funded by the Knight Foundation, to identify and study 500 American companies that now use government open data as a key business resource. As you can see at Open Data 500, we're finding companies large and small, all over the country, and in all different sectors of the economy. They're demonstrating the power of open data and the need for tech professionals to help convert this data into dollars.

While many of these companies are applying government data to challenges like healthcare or finance, others are finding that data management itself is a growing business opportunity. Companies like Socrata, Enigma.io, and OpenGov now specialize in making federal, state, and city datasets accessible and usable. The need will grow as more and more businesses see the value of open data.

Finally, as Open Data Now describes, the open data movement goes beyond government data. Social media, scientific research, and the nonprofit world are all part of a growing open data ecosystem, both providing and using open data in new ways. The opportunities for developing, providing, and using open data will only grow in the years ahead.

Joel Gurin - Joel Gurin is a senior advisor at the NYU GovLab, which studies and promotes open government and open data, consults on open data and consumer information for a number of organizations, and recently published Open Data Now, a general interest book on open data which is available in stores and online.
More about me

This is a great article Joel. Open data encourages public participation and involvement of citizens in the decision making process of the government. It increases awareness and transparency.
Personally, using datasets available on http://data.gov.in/, which is the hub of open data in India, I could refine my insights and understanding of IT Production and IT Exports for the year 2013.
Opendata offers a win win solution to government, citizens and businesses. Thanks again for this insightful piece.