Are you open source enough? 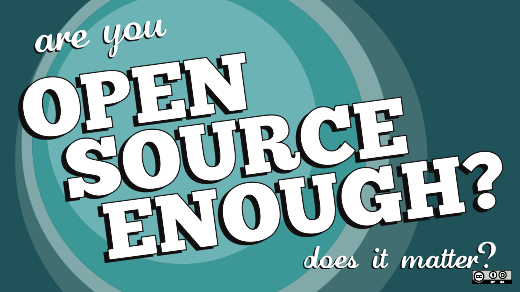 Is your project open source enough? Are you? Are you doing enough for your communities? Accusations like these are getting thrown around more and more, often in the simple form, "X isn't really open." It's a question we've even asked ourselves from time to time when we post stories on opensource.com—is this a real example of openness? But what is "open enough?" And does it really matter?

There comes a point in any community's growth where the collective consciousness starts to feel threatened by newcomers. You know it's happened on a mailing list or web forum when you see posts that start, "I miss when this group used to be..." And if you search Google for the phrase "not really open source," you get 1,800,000 results, suggesting that the broader open source community has officially reached that time.

There are, however, two separate conversations to be had in that search phrase. One is about software, and the other is about the things we talk about on opensource.com—all the other "open stuff." The first one is easier. There is an Open Source Definition and an Open Source Hardware Definition, and those lines are pretty clearly drawn. (And if you prefer to subscribe to "free software" as the ideal, that's well-defined as well.) Despite that, there are plenty of those 1,800,000 barbs thrown at projects that most people would call "open source." Of course, by no means am I suggesting that any old proprietary software should be calling itself "open source." Flexibility has its limits. But the software isn't what this post is about.

What I want to talk about is that second thing, all the other "open stuff," and there are plenty of you who don't feel that those non-software things should be called "open source" at all. I'm not sure I disagree with you. That's why when I talk about those non-software things, you'll more often hear me refer to the concepts that make open source a successful model for software, concepts like transparency, community, rapid prototyping, and of course, sharing. Those principles and the outcome when they're applied are more important than the words themselves. Here's why:

Open source, openness, sharing, whatever you want to call it—it's fundamental to human culture and has been since the beginning of time. We've been sharing from the start, ever since Grog said to Nog, "Ungh, how you build that hot thing...what you call it? Fire?"

The moment a baby is born, and his mother looks into his eyes and smiles, she's sharing his first lesson: what it is to be human and to be loved. The baby learns—and one day, he smiles back. Then she teaches him all the kid things. How to eat with a fork, how to pump his legs on the swingset, and how it's generally considered unacceptable to run through the grocery store aisles in only a Superman cape and Underoos. A few years later, someone else shares with him how to do long division and how to write the five-paragraph essay. We call all that "parenting" and "education" and have a thousand other debates about the right way to do those things, but every single one of those thousand ways involves sharing what we know with the next generation. And when that generation grows up, they take all that we've shared with them and build something greater with it. That's human progress. All built on sharing.

Fundamentally, humans are sharers. But here in the future, some time since Grog learned to make fire, somewhere between when someone teaches us to say "Bobby, you can play with Optimus Prime next" and the day we first step into cubicles, we forget that. We forget how to share anything with anybody we're not "parenting" or "educating." Instead, somewhere along the way, we acquired a culture of all-mine. But then along came a backlash. Not a loud and bloody revolution. A quiet, creeping change in our sensibilities that started making a lot of us look at the world a little differently. We started sharing again. We're not finished changing--it's hard to drive "all mine" out. But we're getting there.

I credit the spread of Internet access. Just like it helped us start sharing software more easily, it helped us start sharing everything else. And boy, do we share now. Even those most mired in the all-mine culture can't resist a cute cat picture or clever philosoraptor image. Sites like Know Your Meme exist because that kind of sharing has gotten so out of hand, it's inevitable that sooner or later, you're going to encounter one and have no idea what's going on—but desperately want to know, because you want to be in on the sharing. People love sharing inane videos so much that entire TV shows (on that antiquated device with channels and things airing at specific times) exist to replay videos someone shared online. Even The Today Show (not exactly known for being on the cutting edge) has a daily segment featuring them. (And boy is that a long way from this clip in 1994.)

Fortunately, that's just step one. After Grumpy Cat and Philosoraptor come Flickr and Facebook. Then Airbnb and ZipCar. Then a $3.5 billion economy built on something that plenty of people have said you can't make money with. Sharing instead of hoarding. Community instead of hiding. Open instead of closed.

It's hard to believe, but only three years ago when we launched opensource.com, this habit of naming everything "open source" hadn't really taken hold yet. There were a few non-software things calling themselves "open X," but we've gotten to watch the proliferation firsthand and have spent those three years telling you those stories. Now that they're here, the number of comments you leave asking, accusing, or complaining that something isn't really open have increased. Other people are writing headlines with the word "openwashing." And there we see that inclination to feel threatened when the thing you hold so dear grows so far beyond what you imagined.

But if you believe that open source is the right way to develop software, then it's more likely you see why those principles are the right way to do everything else. To run our businesses, our schools, and our governments. The right way to live our lives—openly, sharing. Because cliché though it is, it's true—we can do so much more when we do it together. When we share with each other. For those who are new to walking away from all-mine, this is hard. They won't always make it all the way to the other side without help. Remember that, and instead of throwing barbs and yelling that they're not "open enough," share with them. Share what you've learned and teach them to be more open. That is how we're going to change the world. Together.

What to read next
Tags
Hardware
Ruth Suehle