Working at the bleeding edge of global development is about to get more lively. Akvo.org co-founder Mark Charmer argues the world needs the open source movement to assert itself right now.

If you’ve wanted to make a difference in the world, now might be a good time to stick your head into the machine. 2015 is a test moment for the United Nations as it works to get its member states to agree on a joint set of ambitious new goals: the “Sustainable Development Goals” (or SDGs for short). The way data is turned into good decisions is going to play centre stage. On that front, there is still much to be worked out.

Since 2000, billions of dollars in investment were shaped by a series of global poverty reduction goals called the UN Millennium Development Goals (MDGs). Aid and investment in fields such as sanitation, food, healthcare, and education—especially in the poorest countries in the world—have usually aligned with at least one of these MDGs. They set 15-year targets such as, for example, halving the number of people who lack access to clean water.

The MDGs were the first attempt of their kind to create goals that had to steer international development for a long period—to try to come together as a world, to set goals that would be a focal point for international cooperation. There have been lots of lessons learned, but in general they’ve worked quite well. They have provided a focus for activities in a number of key areas, and served to gather funds for specific goals.

The year 2000, when the MDGs were set, was quite a long time ago. It may have been the height of the dotcom boom, but most attention then was on the goals themselves, not necessarily the role information technology would play in gathering data on the progress, or lack of progress, toward them.

Fifteen years ago, who could predict today’s technology? Sure, they wouldn't be surprised that the 1 gigabyte of storage that cost $11.00 in 2000 was just 3 cents by 2014, but who saw something like Wikipedia coming? Who could have anticipated its growth trajectory after it launched in January 2001. YouTube didn’t get going until mid-2005, one third of the way into the MDGs. The first multi-touch smart phone interfaces didn’t appear until 2007.

So it’s a timely relief that an influential report was published in November by the UN Secretary-General’s Independent Expert Advisory Group on data. "A World That Counts" gives a motivational shove to anyone involved with getting these global institutions into post-2015 shape. Despite some valid criticisms about its definitions of data and the limits it can play in doing the right things, the report gives almost anyone trying to improve the use of technology in development something to wave in front of the skeptics.

Software as a means to understand the world

Countries, especially poorer countries, have widely varying levels and standards of data on key indicators. But the falling cost of smart phones and other computing devices, ease of software distribution and data transfer, and vastly improving mobile and Internet data networks in the poorest parts of the world mean massive change happening right now. It’s now potentially very cheap for people to create data sets of, say, the conditions in a slum in Kenya, and analyze them. The whole pool of data skills—people who know how to deal with data—is growing rapidly. It’s very beneficial that these tools are open, because people can learn from them, copy them, and improve them. Right now, open data is all the rage in development circles.

Yet while openness and open data are repeatedly trumpeted, the UN report doesn’t mention open source once. I recently asked the report’s lead author Claire Melamed why, and she said she didn't feel it was within the scope of the report. But "A World That Counts" calls for a variety of things to happen in 2015, all of which could easily become mired in bureaucracy or outdated forms of collaboration without a dose of open source values.

In summer of 2007, I walked into my first UN event feeling like I’d just arrived in 1970. We knew that the culture and licensing of open source software, and the emerging field of open data in aid and development, were essential if we wanted to avoid having silos of data that were, at best, poorly coordinated and, at worst, locked away.  We knew IT would be just as important for the governance and operations of any country as other infrastructure, like roads, electricity distribution or sanitation infrastructure. The most successfully governed countries have local ownership of their infrastructure. You don’t want every road outside your door to be a toll road, owned by a private company. Similarly, you don’t want your governance IT infrastructure to be a toll road in the future.

But information technology around the UN wasn't greeted with much enthusiasm or confidence, and meeting and collaboration culture felt decades behind the most effective modern technology events. Death by Powerpoint didn’t do it justice; the system itself felt like a deathly file format—one that made Powerpoint a joyful celebration of flexibility and individual expression.

In years since, attitudes have definitely changed. But the open source movement's ethos, carved to build really good software that exists in the Creative Commons context, is timely to repeat. It said, "everyone is free to build on this work," and the priorities, as it was conceived and engineered, were around working cooperatively with other similarly minded people who wanted to see really good systems that were less liable to lose their way. In my experience, those who work on open source projects are very mindful of the ways software can be used to discriminate or control. That's really important when you're involved in building tools that map or monitor the situation in a local community in a country that may have very limited legal protection for citizens, for example.

As a mindset and culture, it’s really important that open source communities are the ones leading the evolution of systems that relate to global data and decision-making on sustainable development and infrastructure. It seems to be recognized that it is ultimately cheaper to develop and use open source software, or to use content and knowledge that is shared with Creative-Commons-derived licenses, when working out how to build a planet that works better.

But can the United Nations bureaucracy engage, or give way, to a proposed network of data innovation networks that truly follows open source values? The report wants to see these develop common data-related infrastructures that can address capacity problems and improve efficiency, encourage collaboration, identify research gaps and create incentives to innovate—not easy to do well. Similarly, how leadership events and forums on sustainable development data can quickly adopt the dynamic of the best we see in the open source technology industry remains to be seen.

Funding and investment will also need to adapt to improve data skills and support new innovations. The international development sphere has made some headway into the hackathon process, and there are a variety of promising technology firms, both for profit and nonprofit, achieving success. But those of us building open source software and services are by no means seeing investors queuing at the door, recognizing that we have the chance to build a new generation of country governance data and decision support systems.

But maybe that’s going to change. It may be that we’re about to witness, and be part of, a really interesting 15 year period when the way the world develops understanding of itself becomes pretty amazing. But there’s a real need—an imperative right now, in fact‚ to explain the role the open source movement and its values can play in the SDG era.

This article is part of the HFOSS column coordinated by Jen Wike Huger. To share your projects and stories about how free and open source software is making the world a better place, contact us at open@opensource.com. 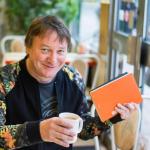 Mark is a co-founder and the communications director of akvo.org. Based in London, he has 20 years experience helping people describe new ideas, technologies and approaches. He has a Masters degree in Design Studies from Central St Martins College of Art, and a Bachelors in Managerial and Administrative studies, from Aston University.
More about me