Android. It can be a divisive word in the free and open source software world. Some embrace it, others shun it. Some still use open versions of Android like Cyanogenmod and Replicant. If you do use an Android device—no matter what version of the operating system it is—there's one thing that you need to get the most out of your device: apps. There's just no way around that.

Most people grab their Android apps from the Google Play Store. Some might install apps from the Amazon Appstore or another third-party source. A majority of the apps that you get from Google and Amazon's app stores are proprietary, and many of them collect a lot of information about you.

So what choice to you have if you want to use Android and keep your apps as free and open as possible? You turn to F-Droid.

an installable catalogue of FOSS (Free and Open Source Software) applications for the Android platform.

All of the apps are FOSS and only FOSS. The source code is available, with app listings often pointing you to where you can download it. F-Droid also warns you if an app uses or relies upon a proprietary service. 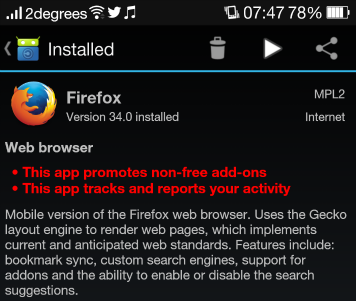 You can do this in two ways: Download and install the F-Droid client, or download the .apk installer for the app that you want and install it by hand. In either case, you might need to enable the installation of third-party apps on your device. To do that, tap settings. Then, tap security. Finally, select the unknown sources option.

I prefer to use the F-Droid client because it makes searching for and updating apps a lot easier.

Let's assume that you plan to use the F-Droid client to install your apps. Once you've installed the client, fire it up. It may take a few moments (or longer) for the database of apps to refresh and to check whether or not the apps in the catalogue are compatible with your device. 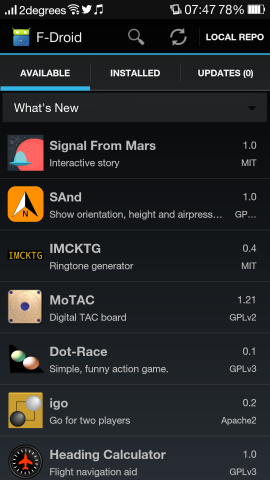 Once that's done, you're ready to go.

The first thing you'll notice is the number of apps available with F-Droid: just over 1,300, in contrast to the hundreds of thousands that are available in the Google Play Store. You won't find many of the popular apps that you may have grown to know and love in the F-Droid repository, but that doesn't mean you won't recognize some. These include Firefox, ownCloud, VLC Media Player, DuckDuckGo, K-9 Mail, and FBReader.

The apps are divided into a dozen categories, ranging from education to games, to internet, to office and productivity apps. Tap the right-facing triangle in the top corner of the F-Droid window to open a list of the categories. 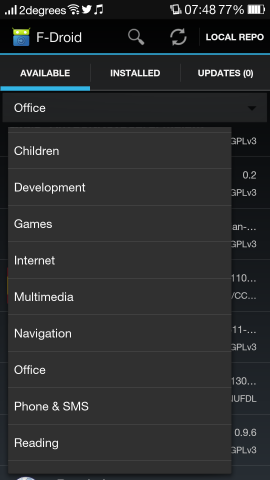 From there, tap a category and then tap the app that you want to install. F-Droid downloads the installer. You'll be shown a list of the permissions the app needs (if any) and whether or not you want to proceed. When you're ready, tap Install.

The main window of the F-Droid app has tabs that list the available apps, the apps you've installed, and the ones you've installed that have updates available. You can remove unwanted apps and update installed apps, with just a tap (or two). You'll also want to keep the list of available apps up to date. To do that, tap the Refresh icon to load an updated listing.

So why would you want to do this, besides a desire to be on the bleeding edge? While new apps aren't added to F-Droid all that regularly, the number of apps available through F-Droid jumped from about 1,200 to 1,340 in the past month and a half or so.

F-Droid may not have the breadth of apps available in the Google Play Store and other third-party Android software libraries, but if you want to use as many free and open source apps with your Android device as you can, then it's an option you'll want to explore.

What to read next
Tags
Android
Mobile
Scott Nesbitt