The future of devices for health is not wearables

Dozens of new self-tracking wearable devices appear every month. They target health and quality of life applications, from sleep to physical activity. And, they are packaged as smart watches or as standalone pieces, launched under the umbrella of startups and industry leaders alike. Currently, there is no shortage of thoughtfully designed wearable devices promising to improve our health and quality of life, but amidst the ongoing technological deluge—do you think the future will be wearable or anti-wearable?

With major players such as Qualcomm rushing in to clear away the fad clouds, and in the aftermath of CES 2015, one is led to think that self-tracking using wearables is the next big thing, right? Think again. Wearables are nice, but have their share of inconveniences; we need to remember to wear them, they need to be frequently recharged, they may cramp up our style, and when too many are worn simultaneously, we end up looking more like a walking Christmas tree than a hip, cool techie.

The pros of wearable tech

Don’t get me wrong; self-tracking wearables have definitely worked out for me so far. When I first started using a Polar heart rate monitor a few years ago, it made a night and day difference between over-exhaustion and going uphill smoothly within healthy limits on my mountain bike.

If not for other reasons, open hardware projects and consumer devices for this space have had a truly transformative role in bringing knowledge, which would otherwise be bound to a hospital or clinical setting, to multiple aspects of our daily lives. Today we are increasingly empowered, more aware, and compelled like never before to check in on what’s going on with our body.

Still, most of us know our share of people that end up having their devices snugly forgotten in the back of a drawer. And we can all relate to the fact that we only get in-sync with our vitals when something is not quite right. Add to this discussion the latest news from projects like the Google Glass that point to a phasing out, and things become less than sharp for wearables. But is there a better solution? 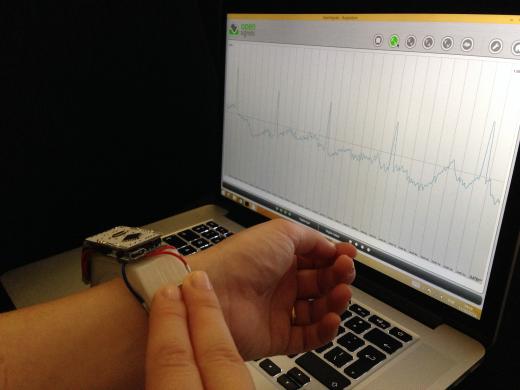 The pros of anti-wearable tech

I believe that, as consumers, we generally tend to value practicality and peace of mind more than anything. Let’s face it, if using a device is too much trouble or a big change to our otherwise easy-going routines, chances are it’ll end up lying around more often than not even if our quality of life depends on it (of course I can only speak for myself).

Although anti-wearables come with their fair share of challenges, the hype is already seeing its way through to consumer products. Some include:

Existing open hardware tools now make it easy for anyone to greatly contribute to this change. For example, the team at BITalino recently completed a series of anti-wearable biohacking projects that resulted in things like a bicycle handlebar fitted with a 3-axis accelerometer and an Electrocardiography (ECG) sensor. The ECG sensor leads are connected to conductive textile electrodes on the left and right grips of the handlebar. Whenever the rider holds the grips with each of his/her hands, the data is streamed via Bluetooth to a smartphone that shows the heart rate.

BITalino on the MOOF: Open hardware BITalino-powered bicycle handlebars that monitor your heart rate without requiring a chest strap (the electronics are on the frame just to showcase the underlying hardware being used).

Long story short, both have their place in our lives. We will surely continue to value the inputs from wearable devices when we’re jogging, exercising in the gym, or doing other free-moving activities. The trend, however, will be to see more and more everyday objects sporting health and self-tracking sensors on them. Alongside all the work being done around big data, anti-wearables make self-tracking more seamlessly integrated with, and a part of, our normal daily lives.

The pace of change is surely due to increase fueled by the open source community, as open hardware for biomedical sensing becomes more readily available. Projects like BITalino, OpenBCI, and others, are contributing to get this expertise out of the hands of a few medical device companies and to empower hundreds of creative and enthusiastic makers and developers around the world.

Why does this matter? Let’s consider cardiovascular diseases for example; according to the World Health Organization (WHO), this is the leading cause of death worldwide both in developed and developing countries. Whereas today one only seeks medical attention sporadically or only when things go wrong, in a near future anti-wearables will lead to things like mobile phones, TV remote controls, car steering wheels, and many other items that act in a preventive way, automatically alerting you to changes in your normal vitals.

Hugo Silva - Hugo Plácido da Silva | Hugo completed a BS in Computer Science, and a MS in Electrical and Computers Engineering. Since 2004, Hugo is a researcher at the IT - Instituto de Telecomunicações, where he’s currently pursuing his PhD. In 2012, he was a visiting researcher at the Computational and NeuroEgineering Labority (CNEL) from the University of Florida. He is also one of the co-founders of PLUX – Wireless Biosignals, established in 2007 as an innovative technology-based company operating in...
More about me

One consideration with ECG measurements is the accuracy in milliseconds of the R-R intervals. Values accurate to the millisecond can be used to compute HRV Heart Rate Variability metrics. (Strongly correlated with exercise recovery and heart health.)

The plethysmography optical techniques have to struggle to attain this, and don't work if any body motion is involved. I would venture to say that even measuring ECG from the hands, would have more noise and less accuracy for HRV, than a device with skin contact at the chest.

Here's a rather novel chest sensor that appears to solve many of these issues.