How to get started with Natron, an open source compositor

If you've ever taken a digital photograph into GIMP to remove red eye or an ex-girlfriend or ex-boyfriend, or crop out a finger that got into the edge of the frame, then you are practically a compositor. A "comp artist," as they are called in the industry, specializes in taking disparate moving images and placing them in the same frame, usually to make it appear that the different elements were shot at the same time. On the big screen, you'll see this in nearly every movie since 1933's King Kong (or thereabouts), but the art has reached a science in the digital realm, where some movies are practically not so much as edited as they are superimposed.

There aren't many dedicated compositing applications on the market, and open source owns not one, but two of them. The first is Blender, which has well proven its worth as a compositor, most recently in Tears of Steel, a movie that combines live action with CG seamlessly. A more recent addition to the team has been Natron, an application that models itself on established compositing conventions and leverages existing initiatives for an open VFX landscape such as openeffects.org, opencolorio.org, and opencv.org.

To install Natron, just download the installer from its website. Run it either as a normal user to install it into your home directory (you might install it to ~/bin/natron, for instance), or with the kdesu or gksudo commands to install it systemwide (for example, you might put it in /opt/natron so that any user can access it).

The install wizard will offer to install several third party tools, including the Tuttle effects; install everything.

Running Natron at the close of the installer may or may not work depending on how you installed it; either way, after the install, launch it from either your file manager or applications menu.

Compositing is both a science and an art, but the user mechanics of Natron don't take long to pick up.

To get started, download the Slackermedia logo from the front page of slackermedia.info and save it to your hard drive in a sensible location. The full path to the image is http://slackermedia.info/images/bigskull.png

Launch Natron if it's not already running. 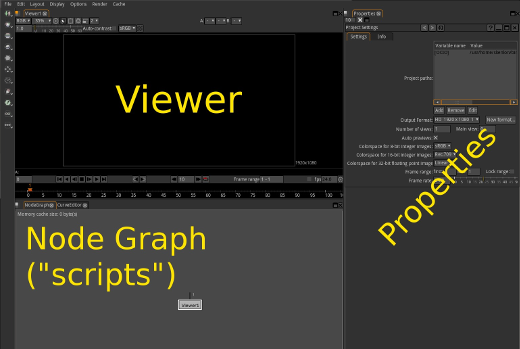 In the Project Settings panel in the Properties area, set the colorspace if that is important to you (for this demo, it is not). Set the Frame Range from its current default value of 1-1 to 1-24. Set the Frame Rate to 12 or so (only because this is a demo and full specs are not required).

To import a movie or image sequence or, in this case, a single image, into Natron, right-click any where in the Node Graph area and select Image > Read, or just press the r key on your keyboard whilst your mouse cursor is within the bounds of the Node Graph.

Once the image is in your workspace, it may not show up in the viewer (depending on how you imported it) because it is not connected to the viewer. Click on the arrow head on the bottom edge of the Read image node and drag your mouse cursor over to the Viewer1 node. After you release the mouse button an arrow appears between the nodes and the image appears in your viewer window.

Natron sets your viewer size to the size of the first image you import. In the Project Settings panel in the Properties area, set the Output Format to a reasonable demo frame size. Since this is just a demo, a small frame size might be better, so set it to PAL unless you want to stress-test your computer to see what it can handle.

Everything is a node

In Natron, nearly everything is a node. If you are experienced with GIMP or Synfig, then whatever your impulse might be to do in either of those applications can be translated to finding a node in Natron to do the same job. It's not always a direct translation, but it's a good place to start.

With the Slackermedia logo in your workspace, add some text:

If you connect the TuttleText node to the Viewer1 node, the text takes over the viewer and it's all you see. You lose the logo, even though both are being fed to the viewer.

That's where the compositing comes in; to see two layers together, you must composite them together:

If the viewer does not update properly, turn on Turbo Mode by clicking the rightmost button in the Timeline strip between the viewer window and Node Graph. This requires more RAM but if you have it, use it. If all else fails, disconnect the viewer and then re-connect it (more commonly known as "unplug it, and plug it back in again"). 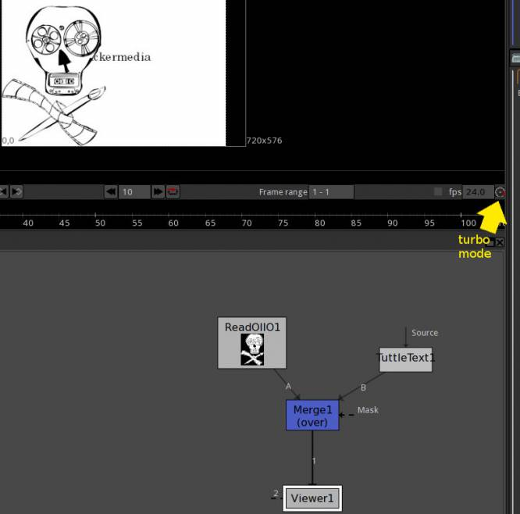 The two images are now composited together. The default merge is an over composite. There are several different types of compositing, and sometimes they go by slightly different names in different programs, but the principles are always the same.

Change the merge composite type in the Merge1 properties panel.

In this exercise, the source material is black and white, so all of the composite modes are basically binary in this case; everything is multiplied or added to absolute values. In most composites, this is not the case. If you want to see more realistic composite examples, try bringing in a photo or video of your own and see how it reacts to text or another image.

Natron would be an over-complex version of GIMP were it not for the fact that it composites pictures that move. Since most of the pictures in Natron will be moving, it's not unusual for the elements you are using to composite them together to have to move.

Currently, the Slackermedia logo and the text in the demo composite are static. Anything that has a keyframe button

next to it can be animated, and there are several additional nodes that add more animate-able properties to your assets.

To animate something in Natron, use keyframes. The keyframe buttons are located in the Property Panels.:

When you're finished your animation, send the playhead back to the start and press play.

Not all assets have handy position markers built in the way TuttleText does. You can add properties, like position, crop, size, rotation, and so on, by adding more nodes to your script. For example, to add a transform node:

As with any property panel, anything with a keyframe button can be animated. 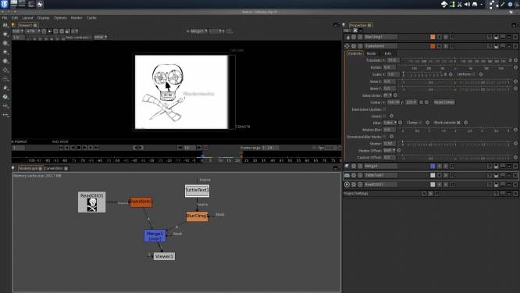 There's a time and a place for motion graphics, but a more real-world example of Natron's ability is the ubiquitous green screen effect. For this, you need sample footage. Sample footage abounds online, but much of what you find online is heavily compressed, which by definition discards information. For a clean green screen, the less compressed your footage, the better.

If you have no green screen footage to use, try doing an Internet search for green screen shots; there are plenty online that you can use at least to experiment on, if not release.

Once you have a good chroma key, you'll see it in your viewer. 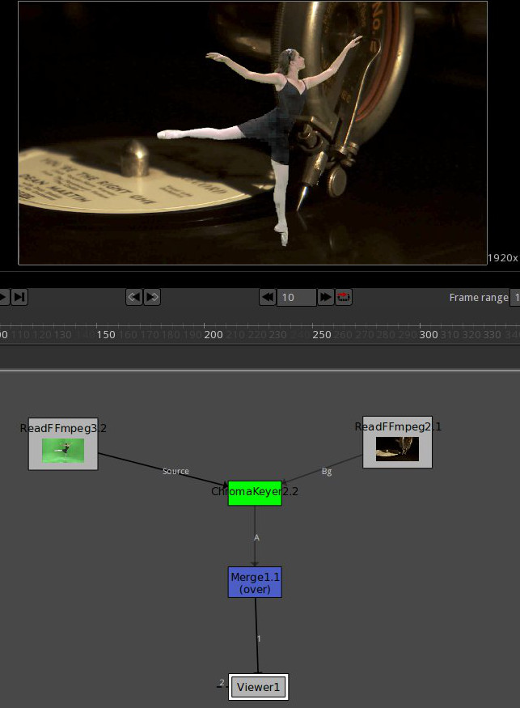 To get a feel for how flexible Natron is, and how a little extra effort in compositing can render improved results, let's add a little style to the shot.

Now you have a scene with the suggestion of depth-of-field at best, or a de-emphasis on any clutter at worst. 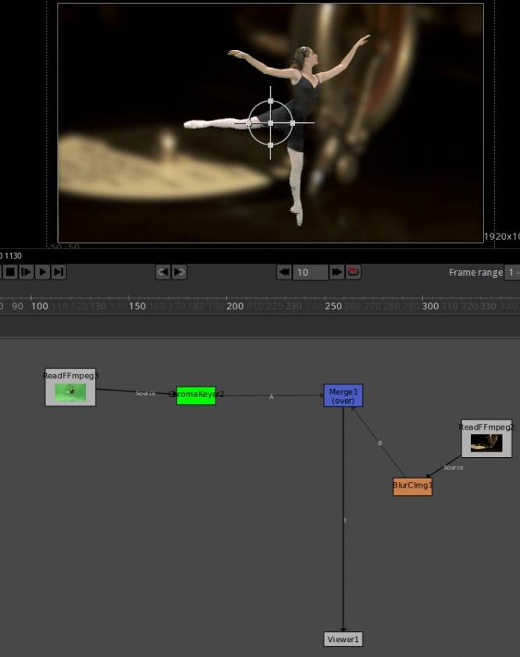 In this example, the ballerina in the shot is still a little rough around the edges. There are several ways to deal with that issue, but in this case an artificial glow to suggest stage lighting is what the client is looking for. This is a good example of how output can be doubled up on itself to produce a unique effect. 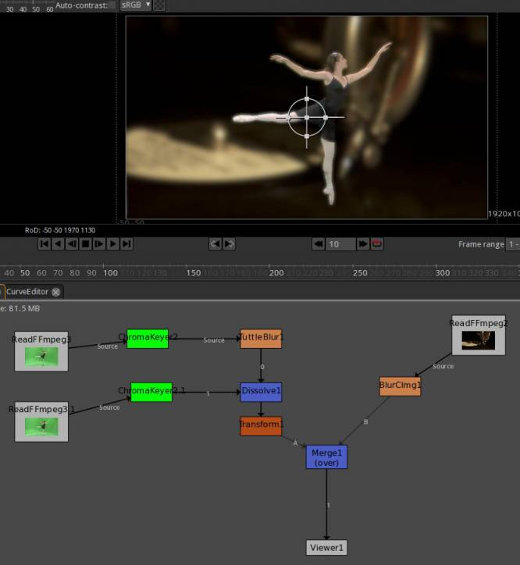 The composite is starting to look like a composite now. Of course, before we released it to the world as a video, we would want to do color grading (yes, there's a node for that) and probably a transform or two to position things better in the frame, but this gives you the basic idea of what is possible and how it all can be done..

The important lesson here is the segmentation technique; rather than hooking all nodes into a central Merge node, the script keeps individual effects in their own subroutines, which are then finally connected to a Merge just above the final viewer. That's not always how a composite will go, but it's important to keep in mind that few scripts are just three or four nodes, and fewer still are linear.

Natron is still a relatively young project. There is a surfeit of documentation on Natron proper, but the compositing principles and even the kinds of effects it uses (and indeed the very effects themselves) are well documented.

Many online tutorials even have free downloadable example assets that you can use in the application they are teaching. Those same assets and principles will work in Natron, so look around online if you are not familiar with node-based compositing; with a little translation, you can learn everything you need to know.