18 reasons to toast the Gnome desktop on its 18th birthday

18 reasons to use Gnome on its 18th birthday 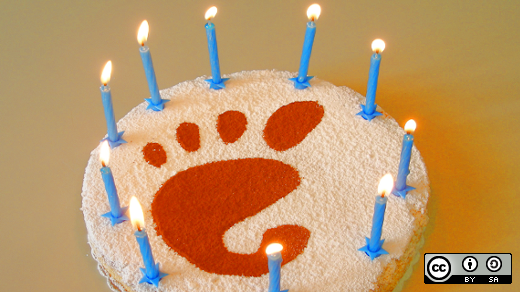 Today the Gnome desktop turns 18. To celebrate, we created a list of reasons to use it:

If you're already a Gnome user, join me in celebrating Gnome's 18th birthday on August 15. Show your support by using the #HappyBirthdayGnome hashtag and by changing your profile picture to this one.

#GNOME turns 18 this Saturday! I've changed my avatar to show my support towards the GNOME project and its developers. #HappyBirthdayGnome!

Thanks to the Gnome community for making an awesome desktop environment! I appreciate your contributions to the open source community.

Do you have additions to our list? Let us know in the comments.

Aleksandar Todorović - I'm a part of the tech department for an awesome investigative journalism network called OCCRP. I'm really passionate about open source software, artificial intelligence and information security. My open source contributions are now merged with projects like reddit, elementary OS and the...
More about me

Don Watkins on 15 Aug 2015 Permalink
I love the article Aleksandar! I love Gnome also. It's my preferred Linux desktop. I wish I knew how to install it rather than the default Unity on Ubuntu. I liked Fedora 22 but couldn't get it to play nice with my wireless adapter and had to revert to Ubuntu and Unity. Red Hat used to have a Blue Curve GUI which was based on Gnome. I really liked that too.

I'm a KDE user myself, so I don't know how good or bad my advice is, but you could install Ubuntu Gnome:

Or, to install Gnome on your curren Ubuntu install, from a terminal:

(or search ubuntu-gnome-desktop in the Software Center).

Why wouldn't you just use Debian then? Since it's the default Debian desktop?

One reason *not* to use Gnome. A great many of those nice extensions stop working when Gnome gets upgraded. This is also true of many of the themes.

I have been using Gnome 3/Gnome-Shell since it first came out. I got used to just searching for the apps I need and I've learned to customize it with the extensions offered at extensions.gnome.org. Now, after using Gnome-Shell so long, I can't go back to the traditional menu system.

I use gnome 3 on archlinux and so easy and simple to use, i am forced to use windows at my workplace and find it more time consuming and harder than gnome to get work done in windows .

David Both on 16 Aug 2015 Permalink
Very good article. Having written "9 reasons to use KDE" on this site, I found your reasons very informative. I will have to try GNOME again.

Aleksandar Todorović on 17 Aug 2015 Permalink
That sounds great! Especially because your article was my inspiration while I was writing this article.

I do think you stretched it a bit - quite a few of the reasons just aren't true or at least debatable. Starting with the first - according to most surveys, Unity is the most used Linux Desktop with KDE second and GNOME not even always third.

I would also put the order different - eg 11 is imho the biggest innovation on the Linux desktop in at least 5 years and deserves a 1st spot.

Going by the numbers:
You can debate 4 - being different for the sake of it won't be considered a plus by all people but that's indeed an opinion.

for sure, though, I still have to see the first report which supports 5 - most say XFCE or LXDE are far, far lighter.

6 and 7 - well, they work, yes. I don't think this was ever very important to the developers but users demand it ;-)

8 is honestly a disgrace, breaking the desktop and creating issues for app developers. We at ownCloud hate that GNOME had to go and create their own notification solution even though there was a decent standard which they could've improved or provided feedback upon. Right now, we don't support ANYTHING for our desktop client as supporting different standards is a pita. So yes, this hurts all Linux users and I find it shameful and arrogant.

11 - biggest innovation/improvement on the linux desktop in years, if you ask me! You sure should've made this number 1.

14 - Qt is the de-facto standard now, and I'm glad for it as it is cross-desktop and cross-platform while GNOME/GTK3 is not. Please care about Linux users outside of the small GNOME desktop share and don't promote the use of GTK3 for new apps...

16 - that was more due to personal differences than technical things.To really let the GNOME Shell vision come to life, I can imagine the GNOME devs didn't want to spend a lot of time on creating a great, re-usable infrastructure like the KDE guys did and that made different visions in one code base impossible - like KDE's Plasma has mobile, desktop, netbook, tablet and media center interfaces which share 99% of their code. Again, this was never the goal for GNOME - which is totally fair. But that's what the forks show, not that it is a great code base ;-)

Thanks for the great article :)