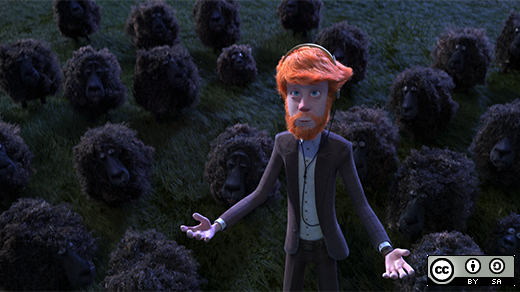 At the beginning of August—the 10th, to be exact—the Blender Institute released Cosmos Laundromat: First Cycle, its seventh open project (and sixth open movie). Cosmos Laundromat, or Project Gooseberry for those of us who have been following its production from the start, isn't just a 10-minute short film. It's also the Blender Institute's most ambitious project to date, serving as a pilot for the first fully free and open animated feature film.

You can watch the film right now. (Fair warning: Cosmos Laundromat is animation for grown-ups. It's safe for work, but some folks may not find it appropriate for children.)

If you're not familiar with the string of open projects that the Blender Institute has kicked out over the years, you might not be familiar with the term "open movie." Simply put, not only is Cosmos Laundromat produced using free and open source tools like Blender, GIMP, Krita, and Inkscape, but the film itself, and all of its assets—models, textures, character rigs, animations, all of it—are available under a Creative Commons Attribution (CC-BY) license. Want to see what a production character rig looks like? Or know how that giant color tornado was created? How about actually using a character (or just a prop) in your own project? Maybe you even want to redo the entire film to your own tastes. It's an open movie! You can!

Furthermore, the movie itself serves as a proving ground for the open source tools used to produce it. Developers are on-site and get a very real sense of how artists use (and sometimes abuse) their tools in an actual production environment. Not only is this a benefit for understanding user interaction, but it really shines a light on pain points and bottlenecks. In the best case, developers can come up with quick (or at least prioritized) solutions during the production. More importantly, however, the experience gives developers understanding and insight for coding projects that begin after production is over.

All of the Blender Institute's open projects have been released this way, and they're not stopping with Cosmos Laundromat. Alumni crew from previous open movies are already in planning stages for another open short film, tentatively titled Glass Half.

Cosmos Laundromat was born as a much bigger idea than this 10-minute short. Its aim was—and to some degree, still is—to be the world's first feature-length animated open film. Of course, funding and producing such an ambitious project is no small matter. All of the previous open movie projects produced by the Blender Institute received a large proportion of funding from crowdsourced pre-sales, many of them before the advent of more convenient mainstream crowdfunding platforms like Kickstarter and Indiegogo. And although these projects raised considerable sums of money (nearly all greater than 100,000 euros), a feature-length film has much greater financial requirements and more challenging production logistics.

Courtesy of the Blender Foundation. CC BY 3.0.

The Blender Institute estimated that the minimum budget to complete a feature-length open movie would be 2.4 million euros, and roughly 20% of that would be needed at the very start of the project. (At this point, it's worth noting that this is a very modest cost compared to big-time Hollywood animated productions with budgets well above the 100 million mark.) Production-wise, the plan was to helm primary production at the Blender Institute's location in Amsterdam while the bulk of the movie would be broken into parts and produced by a dozen other studios around the world. These studios would, of course, use Blender as a major part of their production pipeline.

These were big plans. Huge ones, in fact. To pull it off, the Blender Institute would need to raise 500,000 euros right from the start of the production. The rest of the funds would come from continued cloud subscription fees, plus some additional sponsorship and subsidy money along the way.

The initial crowdfunding campaign launched in March of 2014 and ran through that summer. The goal was to add 10,000 subscribers to the Blender Cloud. Unfortunately, despite the fact that the community raised more money for this project than for any of the previous open projects, this campaign fell quite a bit short of the desired goal. Less than half.

Still, this was an impressive start. A proposition was made to the community of contributors: the Blender Institute could either drop the project altogether or it could pare down the project's ambitious production goals to match the actual funds that were raised. Ultimately, the community opted for the latter. Rather than pursuing a feature-length production, the story would be truncated to a 10[-ish]-minute pilot that gives a sense of what would be in store for viewers in a full-length film. And rather than spreading the production to studios all across the world, the production would be centralized at just the Blender Institute's location in Amsterdam. The Blender Cloud would remain an important component of both the film and the community's involvement (via feedback and funding).

So what did we get? 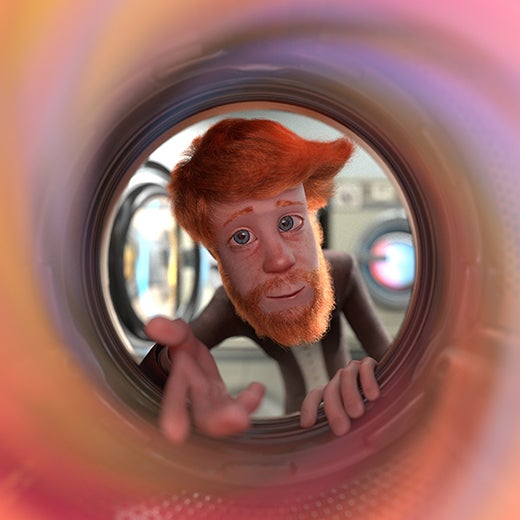 Courtesy of the Blender Foundation. CC BY 3.0.

Roughly one year later, the production is complete. According to Ton Roosendaal, who helms both the Blender Institute and Blender Foundation, the production costs weighed in at just under 400,000 euros. This paid for everything, including three full-time developers, two developers for three-month stretches, seven artists for a 10-month period, and four artists for three months. The results? In addition to a visual treat of a film with a great start to an engaging story, there were quite a few development milestones:

A more in-depth listing of development contributions was recently posted on the Gooseberry blog. Of course, many of these features are still in the Gooseberry development branch and may need some refinement and polish before being migrated to the master branch. For instance, although there were a bunch of improvements to Blender's existing hair and fur system, those blocks of code were more of a stop-gap to facilitate the production of Cosmos Laundromat and might not be directly merged with master. Instead, the lessons and experiences in writing that code for a real production will be the foundation for a near-future refactoring of the hair and fur system that yields better, more stable, easier to control, and more production-friendly results.

It's also worth mentioning that throughout the year that Cosmos Laundromat was being made, Blender continued to get additional development energy that was not related to the film's production. Blender's regular high-paced development continued, with no less than 4 major releases in that time span.

As the subhead for the short movie indicates, this is just the first cycle. The hope and plan is to finish the film in an episodic way. Exactly when and how that will happen remains to be seen. The Gooseberry crew has been incredibly busy the last few weeks with the film's release, attending SIGGRAPH, and screening their film on-site at large Hollywood animation studios like DreamWorks and Pixar. They're due a well-deserved break.

We do know a few things, though. The Blender Cloud is still going strong, with new content being posted regularly and a growing base of subscribers. The next immediate bit of production energy is going to be focused on the Glass Half short. The next release or two of Blender will involve merging some of the remaining code from the Gooseberry branch, but as Blender approaches the release of version 2.8, the pace of releases will slow a bit as developers turn their focus to workflow improvements.

When will we see the second cycle? Will it get produced at all? It's difficult to tell. According to a recent blog post, the script has been "written, designed and mostly storyboarded." The preference would be to stick as much to the original plan and perhaps relay the production of each episodic piece of the film through Blender-based production houses around the world (with unifying direction and guidance from the Blender Institute).

In any case, it's an exciting time for open source creative tools. Cosmos Laundromat shows just how capable they are. And who knows? Perhaps you'll be the one to produce the next leg of the film. After all, it is an open movie. Isn't that what it's all about?

This article is part of the Open Art column by Jason van Gumster. Do you have an idea for a story about an open source art tool or project? Submit your article idea.